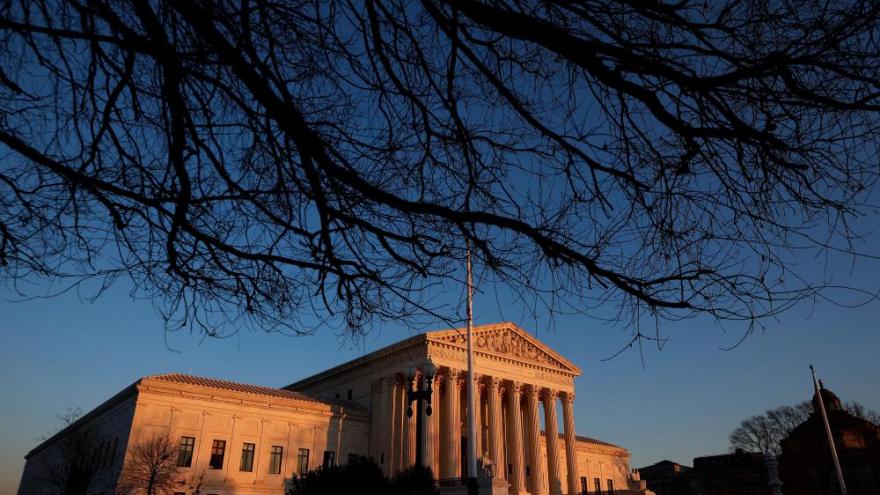 The Supreme Court ruled on arch 24 that a Texas death row inmate could have his spiritual adviser pray aloud and "lay hands" on him during the execution, establishing new guidelines that will govern similar requests in other prisons across the country.

(CNN) -- The Supreme Court ruled on Thursday that a Texas death row inmate could have his spiritual adviser pray aloud and "lay hands" on him during his execution, establishing new guidelines that will govern similar requests in other prisons across the country.

The dispute is the latest case the court has reviewed asking it to balance an inmate's request for a religious accommodation at execution and a state's wish to respect security and safety concerns in the chamber.

The case arose after the court in September agreed to block the execution of John Henry Ramirez while the justices considered his requests concerning his pastor. The current policy in Texas is to allow a pastor in the chamber, but the pastor cannot speak up or physically touch the inmate.

Ramirez was convicted of robbing and murdering Pablo Castro in 2004, stabbing him 29 times in a convenience store parking lot. He also robbed a second victim at knifepoint and fled to Mexico, evading arrest for 3 1/2 years, according to the Texas attorney general's office.

The ruling does not change Ramirez's death sentence.

A lawyer for Ramirez -- who did not argue his innocence -- argued Texas' policy violates the inmate's rights under the federal Religious Land Use and Institutionalized Persons Act of 2000. The federal law provides that the government can't substantially burden an inmate's religious exercise unless the government can show that it is the least restrictive means to achieve the government's interest.

Roberts, writing for the majority, said that Ramirez is likely to succeed in showing that Texas' policy "substantially burdens his exercise of religion" and that the state had not done enough to show that it had a compelling reason for its policy. The chief noted that there is a "rich history of clerical prayer at the time of a prisoner's execution, dating back well before the founding."

He said that while audible prayer could present a risk of interference to the procedure, the state could impose reasonable restrictions, such as "limiting the volume" of the prayer or requiring silence during critical points in the process. Similarly, he argued that the prison currently allows spiritual advisers to stand three feet from the gurney.

"We do not see how letting the spiritual advisor stand slightly closer, reach out his arm, and touch a part of the prisoner's body well away from the site of any IV line would meaningfully increase risk," Roberts wrote.

The Rev. Dana Moore of the Second Baptist Church in Ramirez's hometown of Corpus Christi, Texas, has been a minister to Ramirez. The inmate sought to have Moore in the execution chamber, audibly praying and laying hands on him in the final moments of his life, because that process is deeply rooted in his faith.

Texas Solicitor General Judd Stone had stressed that Ramirez was sentenced to death for "brutally murdering a father of nine for pocket change" and argued that he had asked only recently for his pastor to lay hands on him and speak up in prayer. He told the justices that it was time to "put an end to these tactics" that allow prisoners to delay their executions, sometimes for months and years, while legal challenges play out.

"Today's ruling is significant more for what it isn't than what it is," said Steve Vladeck, CNN Supreme Court analyst and professor at the University of Texas School of Law. "From the briefs and the argument, it seemed genuinely possible that the justices would revisit when and how courts should determine whether a litigant's religious beliefs are sincere."

"Instead, the majority opinion narrowly holds that Ramirez has a viable claim to have an officiant in the execution chamber with him to pray aloud and touch him. That's not going to change Ramirez's ultimate fate, but it avoids a much bigger revisiting of how the court treats religious beliefs of all litigants, including death row inmates," Vladeck said.

Justice Clarence Thomas, who has been hospitalized this week with what the court has called an infection, dissented, detailing the circumstances of Ramirez's crime and charging that Ramirez made his claims to simply delay a sentence "lawfully imposed" by Texas.

Thomas, the court's senior conservative justice, said the majority should have denied Ramirez the opportunity to "manipulate the judicial process." He charged that the inmate's lawyer used the federal law at issue "abusively" and that the victim's family members will now continue to suffer "recurrent emotional injuries."

"In RLUIPA, Congress created a potent tool with which prisoners can protect their sincerely held religious beliefs," Thomas said, but "like any tool, it can be wielded abusively."

A divided federal appeals court had previously allowed Ramirez's execution to go forward, over the dissent of one judge who said that the execution should be blocked to give the courts time to consider the claims.