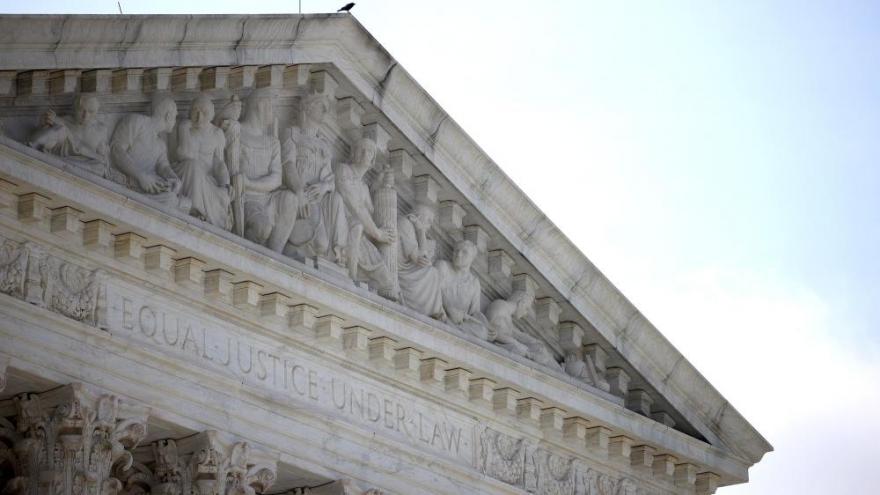 The U.S. Supreme Court is shown June 21 in Washington, DC.

(CNN) -- The Supreme Court on Monday revived a case brought by parents who said their son, Nicholas Gilbert, died in police custody in St. Louis after law enforcement officers placed their weight on his back as he was shackled face down.

In an unsigned opinion, the Supreme Court wiped away a lower court decision, instructing that court to reconsider the claim of excessive force with new guidelines. The justices said they expressed "no view" on whether the officers used unconstitutionally excessive force.

The justices sent the case back down to the lower court to reconsider the claim of excessive force.

In court papers, the parents compared elements of the death of their son, who was White, with the 2020 murder of George Floyd, a Black man. The allegation produced an angry response from the city, which accused the parents of using the death of Floyd "as a cudgel to try to browbeat this Court into reviewing a case that is a straightforward application of basic Fourth Amendment procedures."

The case was being watched for any signal of the justices' willingness to step in and offer more definitive guidance on the legal doctrine of qualified immunity that shields law enforcement from liability for constitutional violations including allegations of excessive force.

In his dissent, Alito criticized his colleagues for returning the case to the lower court. He said that the court should instead "roll up our sleeves" and agree to hear the case and not take the "easy out."

"This course of action may be convenient for this Court," Alito said, "but it is unfair to the Court of Appeals" which, he said, had "actually applied the correct legal standard."

Alito said his colleagues were unwilling to "face up" to a choice between denying the parents' appeal "and bearing the criticism that would inevitably elicit" and agreeing to take up the case "and doing the work that would entail."

He added that "without carefully studying the record" he could not be certain whether he would have agreed with the lower court.

He noted that on one hand, the officers had a "reasonable basis" for using "some degree of force" to restrain Gilbert who had "put up a fierce and prolonged resistance." But he also noted that the officers' use of force inflicted serious injuries and that the medical evidence on the cause of death was conflicting.