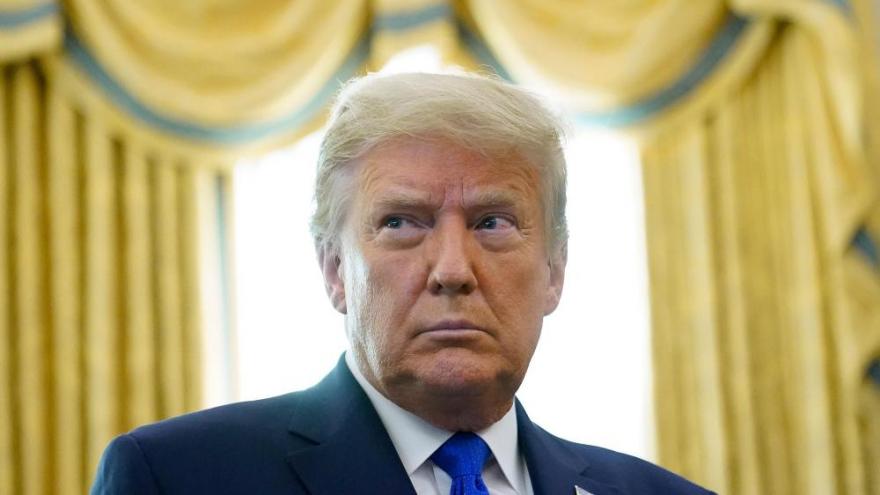 The Supreme Court rejected a bid from Texas' attorney general -- supported by President Donald Trump -- to block the ballots of millions of voters in battleground states that went in favor of President Elect Joe Biden.

(CNN) -- The Supreme Court on Friday rejected a bid from Texas' attorney general -- supported by President Donald Trump -- to block the ballots of millions of voters in battleground states that went in favor of President-elect Joe Biden.

The court's order, issued with no public dissents, to dismiss the challenge is the strongest indication yet that Trump has no chance of overturning election results in court, and that even the justices whom he placed there have no interest in allowing his desperate legal bids to continue.

The Electoral College will convene Monday to affirm Biden's win.

The lawsuit, brought by Texas Attorney General Ken Paxton, a staunch Trump ally, sought to sue Pennsylvania, Michigan, Georgia and Wisconsin -- which all went for Biden -- and invalidate their election results. And this week, with his options narrowing, Trump, accompanied by the support of several Republican attorneys general and GOP lawmakers, cranked up pressure to have the Supreme Court weigh in.

"From a legal perspective, the fat lady has sung," said Steve Vladeck, a CNN Supreme Court analyst and University of Texas Law professor.

Trump and his legal team -- hamstrung by a series of coronavirus diagnoses among lawyers who had traveled across the country advocating on behalf of Trump's case -- have for weeks pushed increasingly desperate appeals and baseless conspiracy theories about his second term being stolen.

"The Supreme Court really let us down. No Wisdom, No Courage!," Trump tweeted around midnight. Mike Gwin, a spokesman for Biden's campaign, said the decision was "no surprise."

Paxton, calling the court's order "unfortunate," vowed to fight on.

"I will continue to tirelessly defend the integrity and security of our elections and hold accountable those who shirk established election law for their own convenience," he said in a statement.

"The Republicans who did follow Donald Trump really have an obligation now to make the country strong again, to heal the chinks that Donald Trump tried to put in the foundation of the country and the democracy," Ginsberg told CNN's Wolf Blitzer on "The Situation Room."

Texas denied for lack of standing

The court's order Friday night was unsigned, and court did not provide a vote count, but there were no dissents to the order made public.

The order states: "The State of Texas's motion for leave to file a bill of complaint is denied for lack of standing under Article III of the Constitution. Texas has not demonstrated a judicially cognizable interest in the manner in which another State conducts its elections. All other pending motions are dismissed as moot."

In a statement accompanying the order, Justices Samuel Alito and Clarence Thomas said they would have allowed the case to be filed, but would grant no other relief.

"Even Justice Thomas and Alito, who might otherwise have been sympathetic to these challenges, went out of their way to express that they would grant no relief on the merits," Vladeck said.

"Not only did the Court reject Texas's effort to challenge the results in four battleground states, but it did so on a ground that will prevent any other states from doing so," Vladeck added.

Another big loss for Trump

For the past five weeks, federal and state courts have rejected most of Trump's attempts thoroughly.

Hastily-written filings have contained a multitude of elementary errors. Many of the pro-Trump arguments hinged on what was ultimately hearsay or conjecture. And in many of the cases, Trump backers have said they don't have evidence proving their allegations yet, but want to review ballots or confidential elections data more closely to see if they can find proof of fraud.

And though Trump has refused to move on, those closest to him -- including the legal team and his family -- are working on their next steps.

Multiple sources told CNN earlier this week that Trump's legal team and inside what remains of his campaign staff have been sensing that efforts to overturn or delay the results of the election are coming to an end. White House staffers are resigning or are out the door, and members of Trump's Cabinet have also begun meeting with their Biden administration counterparts.

First lady Melania Trump, meanwhile, has begun overseeing shipments of family furniture and art to Mar-a-Lago. And Ivanka Trump and Jared Kushner are in the final stages of purchasing a plot of land within a Miami enclave known for its privacy and high net worth residents.

Hours ahead of the court's decision, the President called on the Supreme Court to intervene in the election, but seemed to acknowledge that a Biden administration is on its way.

"Now that the Biden Administration will be a scandal plagued mess for years to come, it is much easier for the Supreme Court of the United States to follow the Constitution and do what everybody knows has to be done. They must show great Courage & Wisdom. Save the USA!!!" Trump tweeted Friday morning.

Each of the four battleground states targeted by the lawsuit -- Georgia, Michigan, Pennsylvania and Wisconsin -- issued blistering briefs on Thursday, with Pennsylvania officials going so far as to call the effort a "seditious abuse of the judicial process."

And although the case started off with Texas challenging four states, it grew into a dispute featuring some 19 Republican attorneys general siding with Texas and 22 Democratic-led states and territories supporting the battleground states that Biden won.

In addition, 126 House Republicans signed on to an amicus brief in support of Paxton's motion, including Minority Leader Kevin McCarthy.

Still, several Republican lawmakers in Washington slammed the basis of the suit, citing federalism concerns and saying Texas shouldn't have a say in how other states hold their elections.

This story has been updated with additional details, background information and reaction.