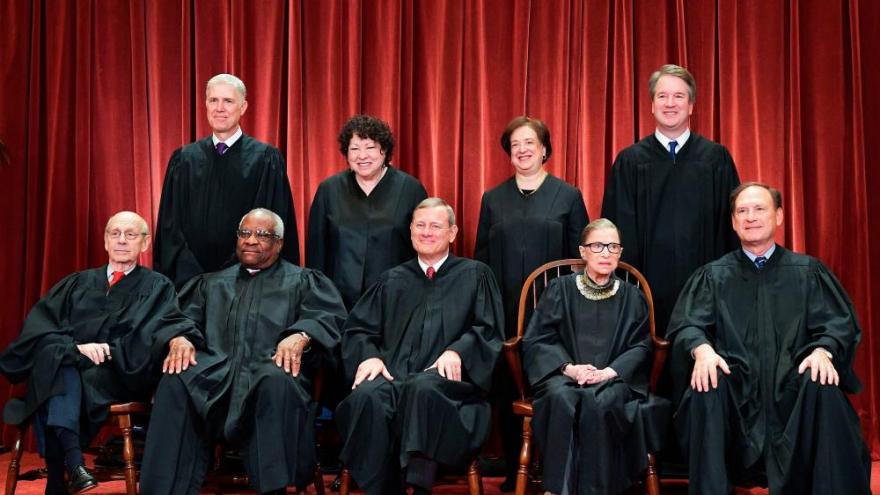 (CNN) -- A controversial execution of a Muslim inmate in Alabama appears to have set off a rare public debate between Supreme Court justices over how the death penalty is enforced.

Despite Chief Justice John Roberts' oft-stated goal of keeping the Supreme Court above the kinds of conflicts that have crippled the political branches of government, there are times when internal debates between the justices -- and even some sniping -- will seep out.

The justices are still bitterly divided over the execution of Domineque Ray, who claimed his religious rights were violated because he could not have an imam with him in the execution chamber, in February -- so much so that they continued to litigate the case in an unrelated opinion issued on Monday.

Along with a third death penalty case involving the request for a Buddhist spiritual adviser last week, the issue clearly has the justices riled up. That's likely to only intensify now that the addition of Justice Brett Kavanaugh has solidified the conservative bent of the court.

"The stakes do not get higher than they do in death penalty cases, and the arguments between the justices and rifts in the court may only get louder and deeper," said Jessica Levinson, a professor at Loyola Law School.

She said the court is likely to move to the right in the coming years and "these three death penalty cases may demonstrate the court's growing pains as it moves further away from the ideological center."

Death penalty experts say that the court's friction often arises in cases concerning lethal injection protocols and last minute stay requests. "As such, we start seeing these conflicts among the justices play out in unusual places and in unusual ways," said Fordham law professor Deborah Denno.

In early February, the court's 5-4 conservative majority provided very little reasoning for its decision to allow Ray's execution to go forward. The Alabama prison allows a Christian chaplain in the room, but officials blocked the imam arguing that only prison employees could be present in the chamber for security concerns.

The 11th US Circuit Court of Appeals had granted a stay of execution, but the high court lifted that stay and cleared the way for the execution, saying that Ray had waited too long -- he made the claim fewer than two weeks before his execution.

The order prompted a stinging dissent from the liberal justices, led by Justice Elena Kagan, who argued that Ray had put forward a "powerful claim that his religious rights will be violated at the moment the State puts him to death."

She accused the conservative majority of short-circuiting the "ordinary" process that should have taken place in the lower courts "just so the state can meet its preferred execution date."

Neal Katyal, former acting solicitor general for the Obama administration, said that the order would be remembered in the same category as some of the most infamous Supreme Court opinions. "100 years from now, law students will read about this decision. It may be read alongside Dred Scott, Plessy v. Ferguson, Korematsu, and the Chinese Exclusion Act cases," he tweeted.

The case also jolted religious conservatives who were stunned that the conservative majority had failed to act on the inmate's request.

Last week, the controversy came up again, when the justices were faced with a similar petition from a Texas inmate, Patrick Henry Murphy, who argued that the state was violating his religious freedom because it refused to allow his Buddhist spiritual adviser into the chamber because the state only allowed Christian and Muslim chaplains who were employees of the prison.

This time, the court stayed the execution with very few clues distinguishing Murphy's case from that of Ray. Only Justice Brett Kavanaugh wrote separately to suggest that Murphy's request was granted because he had filed it in a more timely fashion.

Justices Neil Gorsuch and Clarence Thomas noted their dissents, but it was unclear how Roberts or Justice Samuel Alito had voted.

Flash forward to Monday, when the court issued an opinion in a death penalty case brought by an inmate asking for relief for an entirely different set of circumstances out of Missouri. Russell Bucklew argued his planned lethal injection would cause "severe harm and suffering" because of the fact that he suffers from a rare and progressive disease.

Again, the court split 5-4 in the case, with Gorsuch writing the majority opinion and ruling against Bucklew.

In doing so, Gorusch returned to Ray's execution to make a larger point that "last-minute stays should be the extreme exception."

He accused the dissenters of attempting to "relitigate" Ray's case by asserting that Ray's appeal had been timely.

In a footnote, Gorsuch said that Ray had "long been on notice that there was a question whether his adviser would be allowed into the chamber," yet he waited "just 15 days before the execution" to ask for clarification.

It appeared that Gorsuch was going out of his way to better explain the reasoning behind the Ray order. That was something that particularly bothered Justice Sonia Sotomayor, who struck back in her own footnote that the prison had "refused to give Ray" a copy of its own practices.

"Even today's belated explanation from the majority rests on the mistaken premise that Domineque Ray could have figured out sooner that Alabama planned to deny his imam access to the execution chamber," Sotomayor wrote.

It may be that "there is no way to execute a prisoner quickly, while affording him the protections that our Constitution guarantees," Breyer wrote.

Public sparring over a ruling in a previous case, especially one from just two months ago, is rare, Denno said.

"It was strange to see the justices discussing the merits of an entirely different case that had nothing to do with the case at hand," she said.