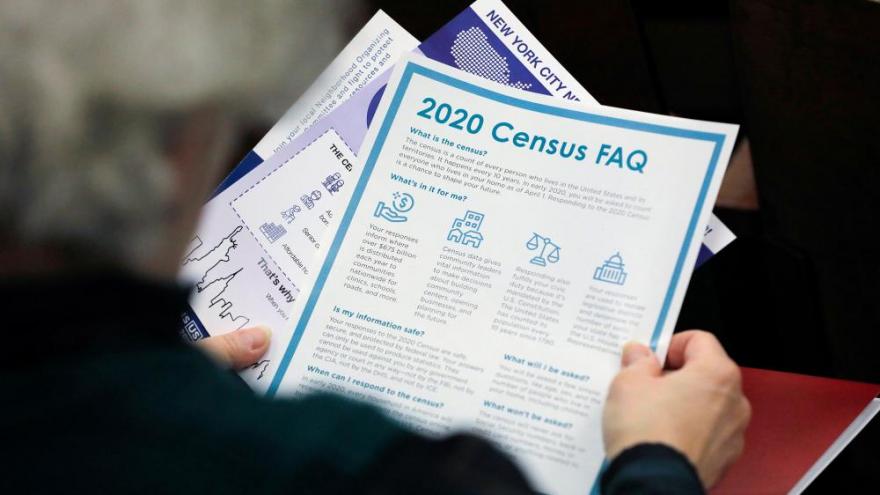 A person holds census information at an event where U.S. Rep. Alexandria Ocasio-Cortez (D-NY) spoke at a Census Town Hall at in New York City on February 22, 2020.

(CNN) -- The Supreme Court on Tuesday granted a request from the Trump administration to halt the census count while an appeal plays out over a lower court's order that it continue.

The administration had asked the high court for "immediate relief" because a lower court order would have required the census count to continue until October 31. The Trump administration argued that would have prevented Commerce Secretary Wilbur Ross from delivering a count of the nation's population to President Donald Trump by December 31.

The ruling is a win for the administration, which argued the shortened deadline is necessary to give the Commerce Department enough time to meet the December deadline. The administration noted that the count had been delayed by Covid-19 but that if the time spent counting were shortened, that deadline could still be met.

Justice Sonia Sotomayor dissented from the order, fearing that the shortened timeline would produce inaccurate results.

"Because the harms associated with an inaccurate census are avoidable and intolerable, I respectfully dissent from the grant of stay," she wrote.

No other justice noted a dissent.

Attorneys for the groups that sued the administration told CNN they will wait to see the Census Bureau's next steps to determine how to respond.

"Every day has mattered, and the Supreme Court's order staying the preliminary injunction does not erase the tremendous progress that has been made as a result of the district court's rulings," Melissa Arbus Sherry, an attorney at Latham and Watkins who argued the case in the trial court, said in a statement.

The Census Bureau said in a statement Tuesday that "well over 99.9% of housing units" have been accounted for and that self-response and field collection operations would conclude Thursday.

San Jose, California, Mayor Sam Liccardo, whose city is among those suing the administration, told CNN they will continue to move the lawsuit forward in the lower courts and, if successful, will "absolutely" request the Census Bureau go back into the field to count people later this year.

But such a move would be difficult, Carl Tobias, a law professor at the University of Richmond, told CNN.

"This stay is effectively the end of it," he said.

Tuesday's order is just the latest twist in what's become a long-running political dispute and is likely to fuel fresh scrutiny over the accuracy of the bureau's US population count.

The Trump administration has exerted unprecedented political influence over the survey in ways that critics say will advantage Republicans in upcoming elections, including by rushing the process and seeking to exclude undocumented immigrants.

In late July and early August, Ross directed Census officials to come up with a plan to condense the door knocking operation, shorten the number-crunching process and meet the December 31 deadline.

Officials warned in internal emails reviewed by CNN that such a count would be of tally of "unacceptable quality" with "fatal flaws" and carry the stain of "politically manipulated results."

In one email, Ross asked if a shortened schedule would allow the numbers to be produced during Trump's presidency. That suggested a concern that Republican leadership, rather than a potential Joe Biden presidency, make determinations over who is counted, while also risking a significant undercount of the population in as many as 10 states.

The political showdown over the census has played out alongside the coronavirus pandemic, which took hold in the US as the massive once-a-decade count was getting underway.

The agency suspended field operations for a time, although that work eventually resumed in some areas.

The census determines how many representatives each state gets in Congress and how billions of dollars in federal funding is spent. Schools, roads and other important things in communities will gain -- or lose -- funding over the next 10 years depending on this official population tally.

And while this year's census has relied more heavily on collecting responses by phone, mail or online, the operation still needs a robust field operation to reach minority communities as well as students on college campuses, seniors in assisted living facilities and people experiencing homelessness.

Not only are these groups at high risk for coronavirus infection, they're also among those most in need of in-person outreach.