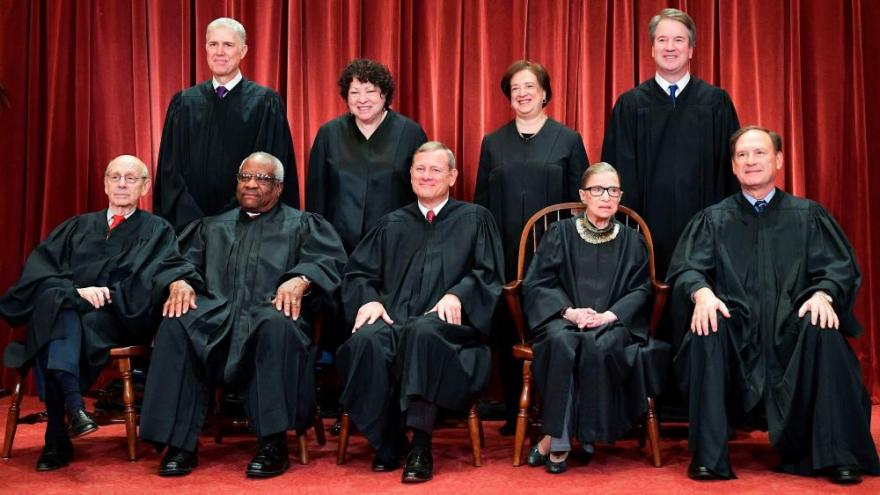 The Supreme Court had been moving gingerly, sitting on a tinderbox of blockbuster cases and carefully navigating the new Covid-19 worl

(CNN) -- Until Monday night, the Supreme Court had been moving gingerly, sitting on a tinderbox of blockbuster cases and carefully navigating the new Covid-19 world.

All that changed when the court issued its first order related to the pandemic after a long day of ricocheting legal briefs concerning Wisconsin's pending primary. Instead of a quiet compromise in the age of coronavirus, the court split 5-4 along ideological lines, in a stinging loss for Democrats and a signal that between now and November the Supreme Court's path may not be smooth as the pandemic continues to cripple sectors of the country and voting disputes multiply.

The majority opinion was unsigned, but Justice Ruth Bader Ginsburg penned a fiery dissent for the liberals, saying at one point the reasoning of her conservative colleagues "boggles" the mind.

At issue Monday was a request to the justices to review a lower court ruling that extended Wisconsin's absentee voting deadlines in part because requests for absentee ballots were exploding and voters expressed fears of contamination and spreading the virus if they had to vote in person.

Republicans asked the justices to put that ruling on hold, while Democrats said they feared a ruling against them would disenfranchise voters and risk public health.

In an unsigned opinion, the Court's five conservatives saw the case as a "narrow" dispute on a "technical question." They stressed court precedent that discourages the changing of election rules so close to an election.

"This court has repeatedly emphasized that lower federal courts should ordinarily not alter the election rules on the eve of an election," they wrote. They noted the lower court had given the Democratic plaintiffs more than they had even asked for.

"Even in an ordinary election," the majority reasoned, voters requesting absentee ballots at the deadline will usually receive their ballots on the day before or day of the election. For the majority, the Democrats "put forward no probative evidence in the District Court that these voters here would be in a substantially different position from late-requesting voters in other Wisconsin elections."

It was that line of thinking that fired up the 87-year-old Ginsburg, who has been practicing social distancing but continuing her workout routine at the high court even if the building is closed to the public. Joined by her liberal colleagues, she blasted not only the majority's reasoning, but the way her colleagues framed the dispute.

"The court's suggestion that the current situation is not 'substantially different' from an 'ordinary election' boggles the mind," she wrote.

Unlike the majority, Ginsburg focused on the virus and the fact that the state had 1,500 confirmed cases and 24 deaths "with evidence of increasing community spread." Because gathering at polling places now poses "dire health risks," an unprecedented number of Wisconsin voters were turning to absentee voting.

"While I do not doubt the good faith of my colleagues, the Court's order, I fear, will result in massive disenfranchisement," she wrote.

While the majority cited Supreme Court precedent meant to stop voter confusion, Ginsburg wrote about an unprecedented global health crisis. She said that the concerns raised by the court and advanced by the Republican National Committee "pale in comparison to the risk that tens of thousands of voters will be disenfranchised."

And although she didn't talk about other potential cases -- for instance the move by several conservative states to restrict abortion during the pandemic in order to preserve medical supplies -- she ended her opinion with a possible look forward. The case was about constitutional rights "and in this most extraordinary time, the health of the Nation."

Her closing differed in every way from the majority, hinting of more similar disputes to come.

"The court should not be viewed as expressing an opinion on the broader question of whether to hold the election, or whether other reforms or modifications in election procedures in light of COVID-19 are appropriate" the majority opinion said. "That point cannot be stressed enough."