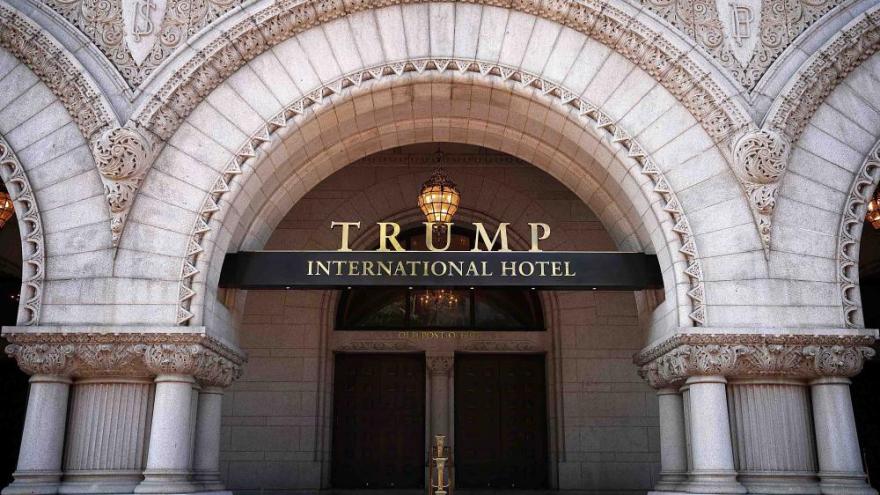 The Trump International Hotel is shown on August 10, 2017 in Washington, DC. The hotel, located blocks from the White House, has become both a tourist attraction in the nation's capital and also a symbol of President Trump's intermingling of business and politics.

(CNN) -- The Supreme Court declined on Monday to hear a case concerning whether former President Donald Trump violated provisions of the Constitution that bar a president from profiting from a foreign government.

The court instructed the lower courts to wipe away previous lower court opinions that went against Trump because he is no longer in office. It leaves unresolved a novel question raised in the case because Trump, unlike other presidents, did not use a blind trust when he assumed the presidency, but instead continued to retain an interest in his businesses and let those businesses take money from foreign and domestic governments.

RELATED: Why the Supreme Court didn't want to hear the Trump emoluments case

There were two cases covering the issue before the justices. One was initiated by lawyers for Maryland and Washington, DC, who argued Trump violated the Constitution by accepting payments from foreign and domestic governments through the Trump International Hotel in DC. They said they were disadvantaged in competing for business from foreign and state officials who may choose to do business with entities in which the President had a financial interest in order to curry favor.

A second case was brought by various members of the hospitality industry who own or work in hotels or restaurants in New York and Washington, who also argued they were put at a competitive disadvantage.

Deepak Gupta, one of the attorneys challenging Trump in the disputes, said on Twitter following the court's decision that he wasn't surprised the case was dismissed as moot after Trump left office, adding it's "disappointing that Trump ran out the clock."

"I'm proud of the work we did to ensure the Constitution's anti-corruption norms weren't forgotten," he wrote.

The group Citizens for Responsibility and Ethics in Washington, which had a part in the cases against Trump, said on Monday that the lawsuits "made the American people aware for four years of the pervasive corruption that came from a president maintaining a global business and taking benefits and payments from foreign and domestic governments."

At the center of the case was the Constitution's Emoluments Clause, which has faced few judicial interpretations since it was written almost 250 years ago.

The Emoluments Clause prohibits a president from receiving an "emolument" or profit from any "King, Prince, or foreign state" unless Congress consents. The so-called domestic emoluments clause entitles a president to receive a salary and benefits fixed in advance by Congress, but prohibits him from receiving "any other emolument from the United States."

"The Supreme Court's procedural order not only wipes away two lower court rulings, but it also orders dismissal of the entire dispute -- leaving for some other time resolution of the many questions Trump's conduct raised about the Emoluments Clause," said Steve Vladeck, a CNN Supreme Court analyst and professor at the University of Texas School of Law.

"Ordinarily, the Court pursues such a step only when the prevailing party moots a case while the appeal is pending -- as opposed to here, where the disputes became moot because Trump's term ended," he added. "Today's orders suggest that the court is increasingly willing to invoke this doctrine to avoid highly charged political disputes, even if the mootness wasn't caused by the parties that won below."

A lower court had allowed 38 subpoenas that were served on five federal agencies that demanded information about money spent by those agencies at the Trump International Hotel in Washington, DC.

In court papers, lawyers for Trump's Department of Justice had argued the lower court in the case brought by Maryland and DC "fundamentally erred in permitting this unprecedented and extraordinary lawsuit to proceed" and called the alleged injury "attenuated and speculative."

DC Attorney General Karl Racine and Maryland Attorney General Brian Frosh said in a joint statement on Monday that their case "will serve as precedent that will help stop anyone else from using the presidency or other federal office for personal financial gain the way that President Trump has over the past four years."

Former Office of Government Ethics chief Walter Shaub blasted the court's decision as "insane" in a tweet, arguing the emolument cases were not moot, as the court said.

"(Trump) still has the money. When any other federal employee violates the emoluments clause they have to forfeit the money," Shaub wrote.

This story has been updated with additional detail and reaction.