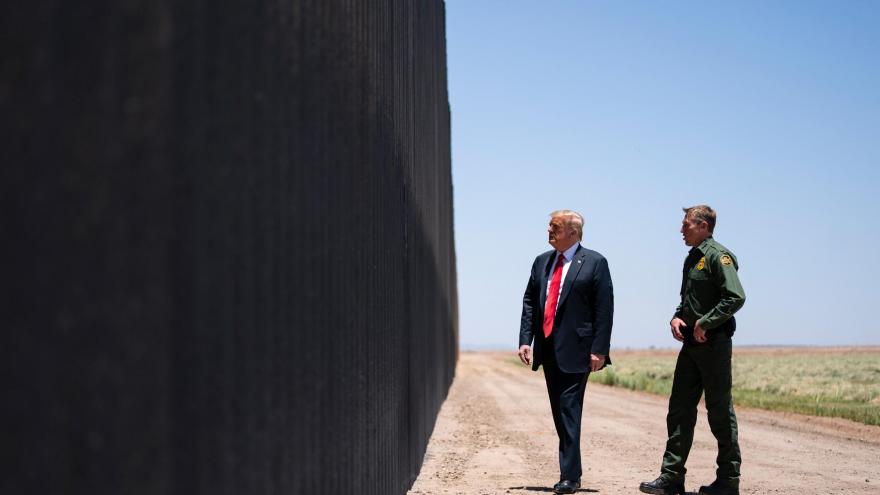 The Supreme Court declined to take up a case on June 29, 2020 over the use of waivers by the Department of Homeland Security to speed up the construction of barriers along the US-Mexico border. In this photo, United State Border Patrol chief Rodney Scott (right) gives President Donald Trump (left) a tour of a section of the border wall on June 23, 2020, in San Luis, Ariz.

(CNN) -- The Supreme Court declined to take up a case Monday over the use of waivers by the Department of Homeland Security to speed up the construction of barriers along the US-Mexico border.

The Trump administration has waived certain legal requirements to proceed with border wall construction. Environmental groups who oppose the barriers say that waiving regulations comes at the expense of wildlife in the region and have challenged the authorities provided to DHS to do so.

The lawsuit brought by the Center for Biological Diversity, among others, is one of a series of legal challenges against the construction of President Donald Trump's signature border wall.

"We're disappointed that the Supreme Court won't consider the Trump administration's flagrant abuse of the law to fast-track border wall construction," said Jean Su, an attorney at the Center for Biological Diversity. "This administration has made a mockery of the Constitution to build an enormously destructive wall. We'll continue to fight these illegal waivers and do everything possible to prevent further damage to the beautiful borderlands."

Jason Rylander, senior endangered species counsel at Defenders of Wildlife, one of the other groups that brought the challenge, said they are "disappointed" in Monday's decision.

"We had hoped that this would be the time that the court would take up the serious Constitutional issues surrounding this administration's waiver of environmental law to expedite construction of the border wall. It's unfortunate that they did not, but we believe that there continue to be serious issues," he said, adding this is the "end of the line" for this particular challenge.

Last week, a federal appeals court ruled that the administration doesn't have the authority to divert Pentagon funds to construct additional barriers on the southwest border.

In a 2-1 ruling, the 9th US Circuit Court of Appeals said that the transfer of $2.5 billion circumvented Congress, which holds the authority to appropriate money. While the ruling was a win for the environmental groups and states challenging the use of military funds, a Supreme Court stay, issued last year that allows the funds to be used, remains in effect for the time being.

The Trump administration is not the first to waive certain legal requirements to proceed with the expeditious construction of barriers along the southwest border. But the case brought to the court involves waiver determinations issued in 2018 and 2019.

The petition before the Supreme Court challenged the constitutionality of DHS' decision to waive dozens of federal laws to erect barriers in California, Arizona, New Mexico and Texas.