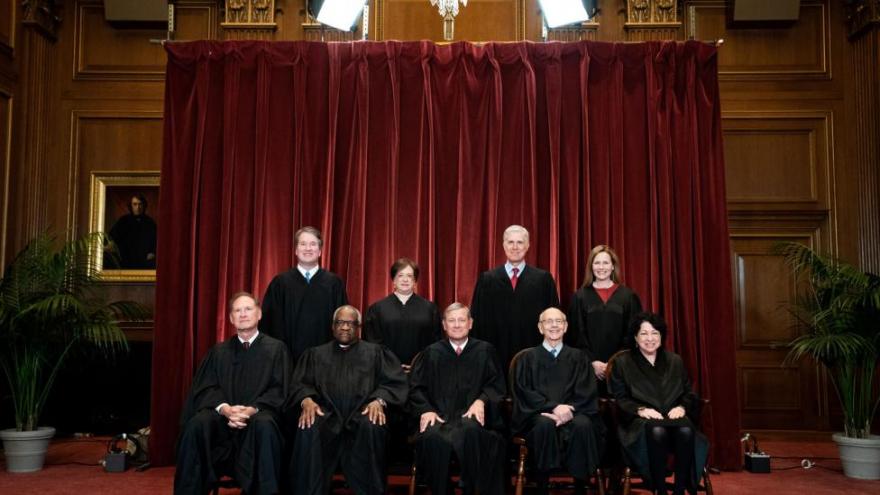 (CNN) -- The Supreme Court cleared the way Wednesday for the release of presidential records from the Trump White House to a congressional committee investigating the January 6, 2021, attack on the US Capitol.

The court's order means that more than 700 documents will be transferred to Congress that could shed light on the events leading up to the insurrection when hundreds of rioters converged on the Capitol attempting to stop certification of the 2020 presidential election results.

Only Justice Clarence Thomas said publicly that he would have granted former President Donald Trump's request to block the document handover from the National Archives to the House select committee. No other justices made an objection public.

The Biden White House supports releasing the records to the committee, after determining the disclosure is in the nation's best interest and declining to assert executive privilege.

"The Supreme Court's action tonight is a victory for the rule of law and American democracy," Reps. Bennie Thompson, a Mississippi Democrat, and Liz Cheney, a Wyoming Republican -- who are chair and vice chair of the panel -- said in a joint statement Wednesday. "The Select Committee has already begun to receive records that the former President had hoped to keep hidden and we look forward to additional productions regarding this important information."

The select committee is seeking more than 700 pages of disputed documents as it explores Trump's role in trying to overturn the 2020 presidential election. That includes his appearance at a January 6 rally in which he directed followers to go to the US Capitol where lawmakers were set to certify the election results and "fight" for their county.

The documents include activity logs, schedules, speech notes and three pages of handwritten notes from then-White House chief of staff Mark Meadows -- paperwork that could reveal goings-on inside the West Wing as Trump supporters gathered in Washington and then overran the Capitol, disrupting the certification of the 2020 vote.

Trump is also seeking to keep secret a draft proclamation honoring two police officers who died in the siege and memos and other documents about supposed election fraud and efforts to overturn Trump's loss of the presidency, the National Archives has said in court documents.

White House spokesman Mike Gwin said in a statement after the ruling that Trump's "actions represented a unique and existential threat to our democracy, and President Biden has been clear that these events require a full investigation to ensure that what we saw on January 6th can never happen again. Today's ruling by the Supreme Court is an important step forward in that process, and in ensuring accountability for an unprecedented assault on our democracy and the rule of law."

The National Archives and lawyers for Trump have not responded to CNN inquiries about the Supreme Court's order.

The move effectively moots former Trump's pending appeal in the case that centered on keeping the documents secret. Lawyers for Trump say the documents are sensitive and privileged records.

"The disagreement between an incumbent President and his predecessor from a rival political party is both novel and highlights the importance of executive privilege and the ability of Presidents and their advisers to reliably make and receive full and frank advice, without concern that communications will be publicly released to meet a political objective," Trump's lawyer, Jesse R. Binnall told the justices.

He stressed that Congress had no valid legislative purpose for requesting the documents. "Congress may not rifle through the confidential presidential papers of a former President to meet political objections," Binnall added.

But the Biden administration argued that withholding the records based on executive privilege is not in the interest of the United States. Solicitor General Elizabeth Prelogar said that in light of the "extraordinary events" of January 6, President Joe Biden had decided that that an assertion of executive privilege is "not justified."

A federal appeals court ruled against Trump, holding that he "has provided no basis for this court to override President Biden's judgment and the agreement and accommodations worked out between the Political Branches over these documents."

The court noted that the events "marked the most significant assault on the Capitol since the War of 1812," but agreed to freeze its ruling until the Supreme Court acted.

"Under any of the tests advocated by former President Trump, the profound interests in disclosure advanced by President Biden and the January 6th Committee far exceed his generalized concerns for Executive Branch confidentiality," the panel of the US Court of Appeals for the DC Circuit wrote.

On Wednesday, the Supreme Court cited part of that sentence. "Because the Court of Appeals concluded that President Trump's claims would have failed even if he were the incumbent, his status as a former President necessarily made no difference to the court's decision," the Supreme Court said.

"Tonight's ruling is a major setback for former President Trump in his efforts to block the National Archives from turning over documents to the January 6 Committee," said Steve Vladeck, CNN Supreme Court analyst and professor at the University of Texas School of Law. "Although the justices did not rule on whether the court of appeals correctly rejected his suit, by not blocking the handing over now, the justices have allowed that ruling to be the final word."

Implications for the House investigation

The Supreme Court's order is a major blow to Trump, at a moment when the select committee is gaining steam as it gathers information from hundreds of witnesses and communications providers.

Rep. Zoe Lofgren, a member of the panel, said Wednesday that she expects the committee will get the records from the Trump White House "very promptly" and called the ruling "a very big deal for getting the truth out."

"I was glad to see the court respected the decision made by the appellate court," she told CNN's Erin Burnett on "Out Front." Asked about the four pages of Trump documents that were set to be released from the National Archives on Wednesday, Lofgren said the panel has "not yet had a chance to look at it, but yes, the material is starting to flow in."

Wednesday's order could also send a signal to other witnesses that they have very little ability to challenge January 6-related subpoenas on executive privilege grounds, potentially opening the possibility for more former White House officials to testify.

The Supreme Court left unresolved key questions about an ex-President's ability to claim executive privilege -- claims that top advisers of Trump have used to refuse or to hold off on testifying to the House.

Currently, former White House chief of staff Mark Meadows is challenging subpoenas from the January 6 committee, in part because he said the questions about Trump's ability to assert privilege in the investigation as a former President remain unsettled. He also faces a five-week-old criminal contempt referral from the House to the Justice Department, though the DOJ has not filed any criminal charges.

The DC Circuit's opinion in the Trump case last month undermined some of Meadows' arguments, but now the Supreme Court has scaled back the reach of that appellate opinion, saying that the DC Circuit's discussion of his status as a former president is not binding precedent.

Justice Brett Kavanaugh, writing alone, said that he agreed with the court's decision to reject Trump's request, noting that the order was not based on Trump's status as a former President.

But in a statement accompanying the court's ruling, the Trump nominee said he didn't agree with a suggestion by the appeals court that a former President may not invoke privilege over documents that occurred during his presidency.

"I respectfully disagree with the Court of Appeals on that point," Kavanaugh said. "A former president must be able to successfully invoke the Presidential communications privilege for communications that occurred during his Presidency even if the current President does not support the privilege claim," he said.

Kavanaugh added, however, that to say that a former President can invoke privilege over such communications "does not mean that the privilege is absolute or cannot be overcome."