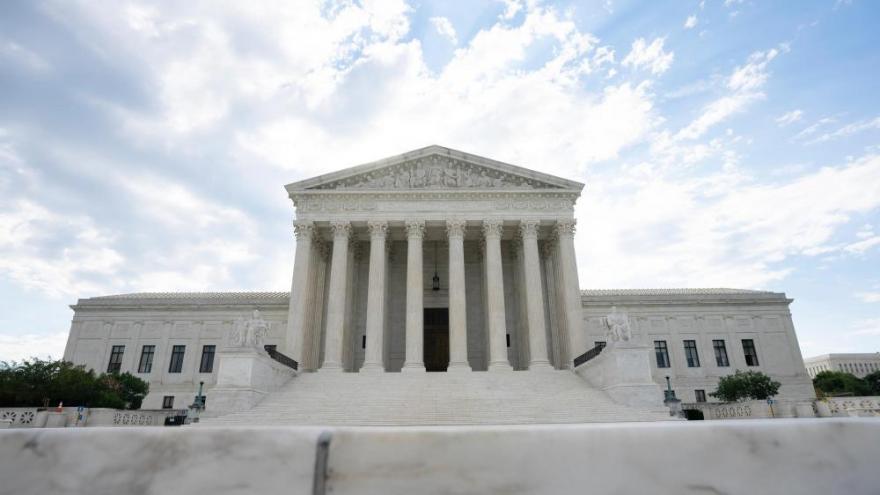 (CNN) -- The Supreme Court by a 5-4 vote on Friday blocked another state Covid-19 restriction on religious services, with another late-night order, over protests from California officials that the limits affecting some Bible study sessions did not impinge on religious rights and were to be lifted within days.

The unsigned order for the high court majority also revealed the deep ideological fissure, with conservatives (including the three appointees of former President Donald Trump) in control and liberals dissenting bitterly.

Chief Justice John Roberts also dissented, although he did not sign the statement by the three justices on the left, written by Justice Elena Kagan.

"In ordering California to weaken its restrictions on at-home gatherings, the majority yet again insists on treating unlike cases, not like ones, equivalently," Kagan wrote, adding that "the law does not require that the State equally treat apples and watermelons."

"And (the majority) once more commands California to ignore its experts' scientific findings, thus impairing the State's effort to address a public health emergency."

Friday's order, issued just before midnight, arose from a California prohibition on gatherings of people from more than three households and affected certain Bible study and prayer meetings held in a home.

The court said that a lower US appellate court had "erroneously rejected" that comparison, based on prior high-court decisions involving public buildings, as opposed to private buildings. The majority acknowledged that California officials were changing the challenged policy on April 15 but said such "officials with a track record of moving the goalposts retain authority to reinstate those heightened restrictions at any time."

Referring to the lower appellate court which had permitted the California household restriction, the majority added, "This is the fifth time the (Supreme) Court has summarily rejected the Ninth Circuit's analysis of California's COVID restrictions on religious exercise."

Those in the majority were Justices Clarence Thomas, Samuel Alito, Neil Gorsuch, Brett Kavanaugh and Barrett.

The court's order noted that Roberts would have denied the challengers' request for high court intervention.

In her dissent, joined by Justices Sonia Sotomayor and Stephen Breyer, Kagan wrote, "The First Amendment requires that a State treat religious conduct as well as the State treats comparable secular conduct. Sometimes finding the right secular analogue may raise hard questions. But not today. California limits religious gatherings in homes to three households. If the State also limits all secular gatherings in homes to three households, it has complied with the First Amendment. And the State does exactly that: It has adopted a blanket restriction on at-home gatherings of all kinds, religious and secular alike."

Kagan concluded, "Because the majority continues to disregard law and facts alike, I respectfully dissent..."

In the case before the justices, Santa Clara County pastor Jeremy Wong and Karen Busch said the restrictions violated their First Amendment free-exercise rights by preventing their usual weekly Bible study and prayer sessions with eight to 12 individuals.

In their request for emergency intervention, they said they "sincerely believe assembling for small-group, 'house church' fellowship is just as indispensable to their faith as attending Mass is for a Catholic. Yet for over a year now, California has completely prohibited or substantially restricted those 'gatherings' and many others."

"By contrast," their request to the court said, "the State allows countless other activities to take place outdoors without any numerical limitations, from weddings and funerals to secular cultural events and political rallies. It also permits more than three households to congregate inside buses, trains, universities, airports, barber shops, government offices, movie studios, tattoo parlors, salons, and other commercial venues."

But California state officials, as they urged the justices not to get involved, said the limit related to members of more than three households was "entirely neutral toward religion" and applies to gatherings for any purpose, secular or religious.

"In any event," lawyers for Democratic Gov. Gavin Newsom told the high court, "the State recently announced that the challenged policy will be significantly modified on April 15. ... In light of improvements in the rates of infection, hospitalization, and death, as well the growing number of vaccinated individuals, the State will be substantially relaxing its restrictions on multiple-household gatherings."

The case is Tandon v Newsom.