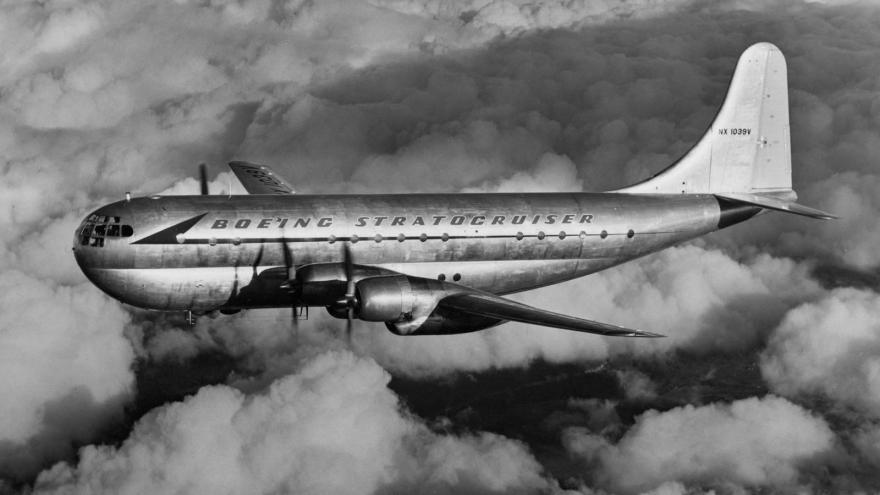 (CNN) -- Airbus Beluga, Boeing Dreamlifter, Antonov AN-225: these are the names of some of the biggest aircraft in the world, designed to carry extremely large cargo, such as parts of other planes.

Because of their rarity and their extraordinary appearance, they are the eye-catchers of the aviation world and a planespotter's dream.

But these aircraft wouldn't exist without a lesser known series of planes that first flew in the 1960s and helped America win the space race.

"NASA was trying to figure out a way of moving objects that were very light but very large -- in other words, rocket components -- from one side of the USA to the other," says aviation historian Graham M. Simons.

During the early years of America's fledgling space program, rocket parts headed to Cape Kennedy had to go through the Panama Canal or the Gulf of Mexico on barges, adding weeks to an already frantic schedule.

But in 1962 a new aircraft solved the problem with the widest cargo hold ever built, at almost 20 feet in diameter. Key spacecraft components could now reach Florida in 18 hours instead of 18 days.

It was called the Pregnant Guppy -- the first in a line of eight Guppy aircraft that would be built over the years. And one of them, even though it contains technology dating back to the 1940s, is still flown by NASA.

Much like the modern Belugas and Dreamlifters, which are modified versions of passenger planes with a bloated fuselage, the Pregnant Guppy was derived from one of Boeing's first airliners, the 377 Stratocruiser.

In turn, the 377 was based on a World War II-era bomber, the B-29 Superfortress.

The plane borrowed parts from several other aircraft, following a recipe devised by Jack Conroy, a retired US Air Force pilot.

"He pitched the idea to NASA, to convince them that they had a need for an aircraft like this," says John Bakalyar, program manager for the Super Guppy at NASA. "When he showed a concept of what the plane would look like to NASA management at the time, they responded 'That looks like a pregnant guppy,' and the name stuck."

Conroy established a company, Aero Spacelines, to build and operate the plane, which ended up being 16 feet longer than the Boeing 377, and the only aircraft in the world capable of transporting the upper stage of a Saturn rocket for the Apollo program.

The bulbous plane turned out to be so useful that in 1965, Conroy was ready for a sequel. He called it the Super Guppy.

"The biggest difference was that in the original Pregnant Guppy, the tail was disconnected from the aircraft in order to load payloads into the cargo hold, whereas in the Super Guppy it's the nose that opens," says Bakalyar, noting that the switch made operations easier.

The new plane was also bigger -- 14 extra feet in length and a cargo bay diameter of 25 feet -- and its engines were upgraded to more powerful and lighter versions.

It remained in service with NASA for 32 years, flying for a whopping three million miles in support of several space programs, from Apollo to the International Space Station.

In 1967, Conroy expanded the Guppy family with the Mini version, which had a reduced cargo hold diameter of 18 feet. Two were built, although one crashed during a test flight, killing its crew of four.

Three years later, in 1970, the final version of the Guppy took to the air for the first time.

Called the Super Guppy Turbine, it was roughly the same size of the original Super Guppy, but was based on a custom-designed middle fuselage rather than one from an old Boeing 377. This allowed the floor of the cargo hold to be widened from just under nine feet to a roomier 13 feet, making it possible to carry larger payloads.

The plane was still a mash-up, with cockpit, wings and tail still coming from a 377, and the nose gear from a Boeing 707. The engines came from a Lockheed P-3 Orion, an anti-submarine plane, but with propellers from a C-130 Hercules, a military transport aircraft.

This new version attracted interest from overseas, where Boeing's main competitor, Airbus, was about to launch its first twin-engine wide-body airliner, the A300.

"Airbus had a similar logistical requirement to NASA: They had to move around large parts of the original A300, which was being built all over Europe," said Graham M. Simons.

Airbus purchased two Super Guppy Turbines in the 1970s, and they became an integral part of the manufacturer's operations.

"Eventually Airbus acquired the rights to manufacture the Super Guppy from Aero Spacelines, so they built another two of their own and used them for many years," says Simons.

The last of its kind

By the mid-1990s, Airbus had outgrown the Super Guppies and built its own super transporter, the Beluga. It was based off the A300, the very aircraft that the Guppies had helped bring to life, and its design was heavily informed by the experience Airbus had acquired by assembling the final two Super Guppy Turbines.

NASA, however, was in need of replacing its aging original Super Guppy, which had been flying since 1965, so they purchased the youngest one in Airbus' fleet.

This particular Guppy is truly unique. When it was built at the end of the 1970s, there were no Boeing 377 airframes left to cannibalize, so Airbus assembled it using parts from the original Pregnant Guppy instead.

The last surviving Guppy only exists because it's made from bits of the very first one.

That also means it contains some very old technology, as parts of the airframe were taken from one of the first Boeing 377 ever built, dating back to the late 1940s. Maintenance, therefore, can get complicated.

"We have a dedicated team that maintains the aircraft. NASA uses it as an operational asset, so we maintain it with the intent that it is not a flying museum piece, but actually a workhorse for the agency," says Bakalyar.

Flying into the future

One of the biggest challenges in keeping such an old aircraft in good working order, Bakalyar says, is addressing problems related to obsolete systems.

"If something breaks, you can't just go order a replacement, because no one has been making it for 50 or 60 years," he says.

So, NASA has been proactively updating some of the plane's old systems to more modern ones before they even start to break.

The plane, however, is still very much the definition of old school.

"I've had the chance to fly on it several times, and it's a very different experience compared to modern aircraft," Bakalyar says.

"A flight engineer is required in addition to two pilots, and particularly during takeoff and landing those three crew members are operating in very close coordination.

"It's a unique aeroplane, it kind of has an awkwardness about it, but knowing what it's able to do and its unique ability to continue to perform that role, it wins people over," he says.

Starting in the late 2000s, the plane has been used to ship components of the new Orion spacecraft, which NASA plans to use for future manned missions to the Moon and Mars. And it's still very much in use today.

"In 2019, we flew 110 hours, and we completed seven airlift missions. That's about typical for us: we usually fly between four and eight missions a year," says Bakalyar.

For that reason, NASA has currently no intention to mothball the last Guppy or even replace it. "There's not many other aircraft out there that can provide this kind of capability," says Bakalyar.

"There are no plans to retire the aircraft and we are focused on maintaining it as a useful asset for the foreseeable future. And we're planning on payloads that are years into the future."