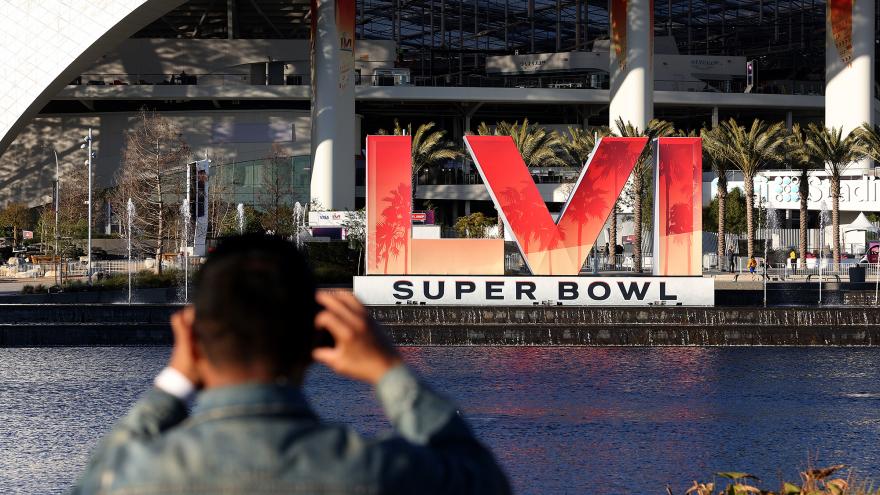 (CNN) -- Super Bowl tickets have never been a bargain. At least not for the last LIV years or so.

But for those looking to attend the big game at SoFi Stadium in Los Angeles on Sunday, the prices won't be as high as they were only a few weeks ago.

There also were record prices at last year's game in Tampa, Florida, when SeatGeek and StubHub, two of the leading resale services, sold seats at prices above $8,000. The ticket costs were inflated by limited capacity rules imposed because of the pandemic, and also because the Tampa Bay Buccaneers were playing in their own stadium -- a Super Bowl first.

The pre-pandemic record was the 2020 game between Kansas City and San Francisco in Miami, when the average price was between $6,500 and $7,200, depending upon the service.

When this year's matchup was set two weeks ago, with the hometown LA Rams set to meet the championship-starved Cincinnati Bengals, record resale prices seemed likely. Prices on all three resale services for a single ticket were around $10,000. Now it appears the prices won't top the recent records.

But they'll still be costly. In addition to the price of the tickets, parking passes are going for hundreds of dollars, and as much as $5,700 if you want to park in one of the lots closest to the stadium.

"Parking is always a big deal for Super Bowls," said Brett Goldberg, of TickPick, another resale service. "Already limited parking becomes much more limited because of the space the NFL takes up." Some fans who can't afford tickets to the game may choose to get a parking space so they can tailgate and watch the game on televisions from the lot.

Overall, parking passes, including those at lots fairly far from SoFi Stadium, are going for an average of about $516 on SeatGeek, with a minimum price of $275 on StubHub.

For those who actually want to be inside the stadium, the prices might be a fraction of the highs of a few weeks ago, but they're still in the thousands.

"The fan base responded to lower pricing," said Goldberg.

As of Saturday morning the average price of tickets purchased on SeatGeek over the previous 24 hours was $6,414, up from the prior day's average of $5,143, but still a fraction of where the prices were just after the conference championships.

Ticket sellers often cut prices in the days leading up to the Super Bowl, worried that they'll miss a chance to sell the tickets at all.

"It's an expiring good. They're not really worth anything come Sunday night," said Chris Leyden, director of consumer strategy at SeatGeek.

With the hometown Rams one of the teams in the Super Bowl, the expectation is that there may be more last minute purchases than a normal Super Bowl, which are typically played in a neutral site that most fans have to travel to.

That could lead to an unusual last minute surge in average ticket prices for fans who missed buying at the bottom of the market, even if the prices remain below the current overall average.

"When the late buying behavior kicks in, as I would expect it to, the prices have nowhere to go but up," said Akshay Khanna, general manager of North American operations for StubHub.