Super Bowl LV will be a bonanza for gambling companies 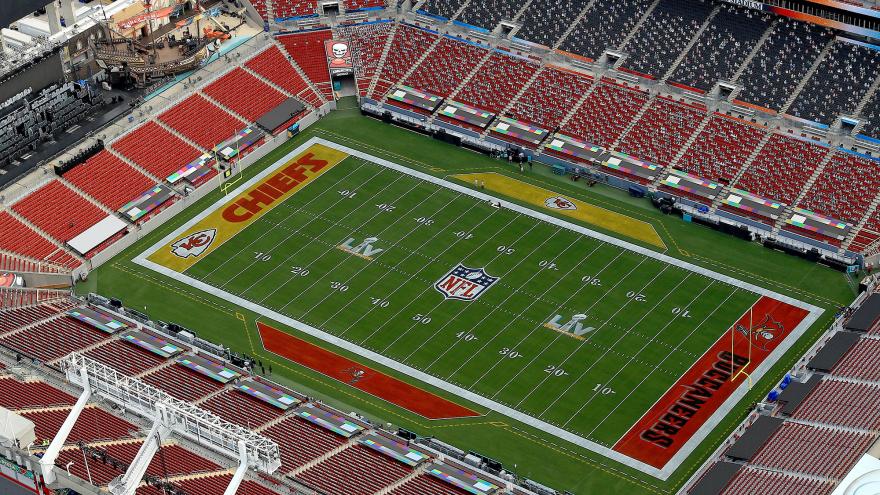 (CNN) -- The Kansas City Chiefs or Tampa Bay Buccaneers? We don't know who will win Super Bowl LV. But the big sports betting and fantasy firms are already champs.

DraftKings shares have surged nearly 35% this year ahead of Sunday's big game in Tampa. The stock is up nearly 260% since it went public last April following a merger with a "blank check" special purpose acquisition company, or SPAC.

This is the third Super Bowl since the Supreme Court legalized sports betting at the state level in 2018. Several states have since approved measures allowing bets to be placed at physical locations (known as sportsbooks) as well as through online wagering. That means 2021 could be the best year yet for the gambling giants.

DraftKings isn't the only firm to cash in on the wave of legalized sports betting around the United States.

Shares of UK-based Flutter Entertainment, owner of DraftKings rival FanDuel, are up about 75% in the past year. Casino owner Penn National Gaming, which bought a big stake in Barstool Sports last year, has soared about 280% since February 2020.

"Demand is off the charts," said FanDuel CEO Matt King in an interview with CNN Business Thursday. "This will be biggest event in the company's history."

Football fans in more than two dozen states and Washington, DC, now have the ability to legally bet on sports online, via mobile apps or in person at licensed sportsbooks.

"The most significant change is the growth of our available customers," said DraftKings CEO Jason Robins.

For 2019's Super Bowl, Robins notes, DraftKings was able to take bets from users in just one state: New Jersey. Last year, the app was live in five states. Now, it's up to 12.

Meet the two players that dominate the business

DraftKings, along with FanDuel, is already a market leader. The two companies have emerged as the Coke and Pepsi of the sports betting industry.

Both firms are letting gamblers place traditional bets like who will win the game and/or cover the point spread. (The Chiefs are favored by 3.)

But gamblers can also make so-called proposition or "prop" bets on outcomes such as who will win the game's MVP trophy -- Robins said the Chiefs' Patrick Mahomes is the favorite with the Buccaneers' Tom Brady a close second -- or which player will score the first touchdown.

DraftKings is also hoping to take advantage of the Super Bowl spotlight to add even more customers. Robins told CNN Business the company is running two 15-second commercials on Sunday night: one just before halftime and another in the third quarter.

FanDuel's King said he was not concerned about the fact that DraftKings is advertising during the game -- and potentially increasing its exposure with customers as a result.

King said it didn't make sense for FanDuel to buy ad time this year. CBS is reportedly charging roughly $5.5 million for a 30-second spot. But he didn't rule out running commercials in future Super Bowls, noting there are enough gamblers around to support several successful companies in the business.

"We're very much in the early stages of this industry. If you compare it to any other digital and disruptive industry, there will be a shakeout," King said. "But it's not going to be a winner take all market. There will be a few big players."

Casino companies look to cash in on sports betting too

Barstool has the potential to be a third major player in online gaming as the company continues to expand to other states.

"We're happy with the early returns, but we're in this great spot where we think we can generate meaningful market share and profitability just relying on (our) Barstool media partnership," said Penn National Gaming CEO Jay Snowden on the company's earnings conference call Thursday morning.

Caesars is moving more aggressively into the business as well, thanks to its planned acquisition of UK-based bookmaker William Hill and a partnership with fantasy sports company SuperDraft.

"Nobody besides FanDuel and DraftKings has any major market share at this point," said Caesars co-president of sports and online gaming Eric Hession. "But the reason we are making these investments is that over the longer term, we can create a compelling offering."

Hession added that gaming companies like Caesars can leverage their existing base of gamblers in physical casinos and take advantage of their brand name and marketing prowess. Caesars is inviting about 250 of its most loyal customers to watch the Super Bowl at a socially distanced event at Allegiant Stadium, home of the NFL's Las Vegas Raiders.

Several other companies in the fantasy sports and gambling world are looking to take advantage of the hype around the Super Bowl -- as well as other live sports.

A company named PrizePicks even allows gamblers to make mixed sports bets: A customer could make a combined wager on, say, how many fantasy points Mahomes will tally as well as how many points Bradley Beal of the Washington Wizards will score against the Charlotte Hornets on Sunday.

So there's plenty of gambling interest out there for the numerous sports gambling companies to tap into.

"The Super Bowl is a very busy time for us," said PrizePicks CEO Adam Wexler. "It's an active week for all daily sports fantasy sites."