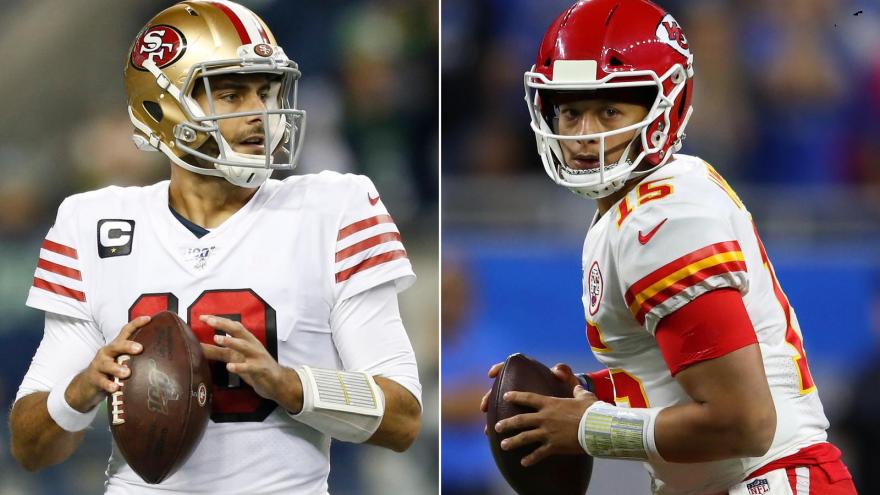 The Kansas City Chiefs and San Francisco 49ers will meet in Super Bowl LIV, with kickoff scheduled for 6:30 p.m. ET at Hard Rock Stadium in Miami Gardens, Florida. The game will be televised live in more than 180 countries and territories and will be broadcast live in almost 25 languages.

(CNN) -- This Super Bowl is a classic case of a seemingly unstoppable offense against an impenetrable defense.

Which means this: Something's got to give on Sunday.

The Kansas City Chiefs and San Francisco 49ers will meet in Super Bowl LIV, with kickoff scheduled for 6:30 p.m. ET at Hard Rock Stadium in Miami Gardens, Florida. The game will be televised live in more than 180 countries and territories and will be broadcast live in almost 25 languages.

Kansas City, the AFC champion with its high-speed offensive attack, is a slight favorite. The Chiefs are in their first Super Bowl in 50 years, with their lone title coming in Super Bowl IV.

Chiefs quarterback Patrick Mahomes, last year's league MVP, is looking to join Ben Roethlisberger and Tom Brady as the only quarterbacks to hoist a Lombardi Trophy before their 25th birthday. At 24 years and 138 days old on Sunday, Mahomes is the fifth-youngest quarterback to start in the Super Bowl.

Should Kansas City win, Mahomes will become the youngest player to win both an NFL MVP award and a Super Bowl title, surpassing Pro Football Hall of Famer Emmitt Smith (24 years, 233 days old on the last day of his MVP 1993 season).

The 49ers have five Super Bowl titles, which ties them for third among NFL teams. They can tie the New England Patriots and Pittsburgh Steelers for the most.

Expectations were high for San Francisco in 2018, but quarterback Jimmy Garoppolo tore his ACL in the third game of the year as the 49ers limped to a 4-12 finish. Garoppolo went through an intense rehab and has thrived this season.

Garoppolo started all 16 regular-season games, completing 69.1% of his passes for 3,978 yards, 27 touchdowns, 13 interceptions, and a 102.0 passer rating -- though notably in this postseason Garoppolo is just 17-27 for 208 yards with a touchdown and interception in two games.

Instead, their offensive production has come on the ground. Raheem Mostert rushed for 220 yards in the NFC championship game, the second-highest total in a postseason game, behind Pro Football Hall of Famer Eric Dickerson (248 yards for the Los Angeles Rams on January 4, 1986).

And San Francisco's defense is flat out scary. Rookie defensive lineman Nick Bosa had three sacks in the 49ers' first two postseason games, while cornerback Richard Sherman snagged an interception in both the divisional and championship rounds.

"I think attitude, confidence, whatever you want to call it, when you're playing with that, I think it makes you tough to beat whether you're the better team or not," Garoppolo said. "Football is a crazy game. It's not a seven-game series, so it's not always the best team that wins. It's who plays better that night."

Garoppolo has two Super Bowl rings himself, from when he was Brady's backup with the Patriots. Garoppolo told reporters this week that he received texts from Brady and Patriots head coach Bill Belichick congratulating him for winning the NFC championship.

"It wasn't too complicated or anything," Garoppolo said of Brady's text wishing him luck for Sunday. "Just go win."

Shanahan on previous Super Bowl loss: 'Don't think there's anything to run away from'

Both head coaches -- Andy Reid of the Chiefs and Kyle Shanahan of the 49ers -- have previously experienced Super Bowl heartbreak.

Reid has the most wins of all time as a head coach without winning a Super Bowl or NFL title. He lost to the Patriots in Super Bowl XXXIX on February 6, 2005, when he was head coach of the Philadelphia Eagles.

When he was asked if having not won a Super Bowl has kept him up at night at all, Reid -- in his second Super Bowl appearance in 21-year coaching career -- replied, "Life is bigger than that."

"I'm going to swing to the best of my ability. I'm not going to tell you that there aren't other things in life. I understand that, too."

Shanahan is the 40-year-old son of two-time Super Bowl-winning coach Mike Shanahan. They are the only father-son duo to each appear in a Super Bowl as a head coach in NFL history.

But the younger Shanahan is also known for his time when he was with the Atlanta Falcons as offensive coordinator -- and when Atlanta relinquished a 28-3 lead and lost to New England in Super Bowl LI.

The days after the loss were really tough for Shanahan, who left Atlanta for the 49ers head coaching job after the season. But he has faced it head on.

"I thought we played a pretty darn good game. ... We all know that we did not play well in the fourth and didn't coach well. But to sit here and run from something that, I'm not going to run from that. ... I understand perception-wise how much I had to take of that, but I think I can deal with that, and I've been able to. ...

"I think it was harder for people who love me, like my wife and family members because they're very defensive of it and things like that.

"I was involved in the game. I know exactly what happened on every single play and I know I can live with that. ... Maybe a play or so I would call differently, but I would do it all over again and feel a lot stronger and better from it."