Summer air travel is off to a messy start. Here's how to up the chances of getting where you want to go 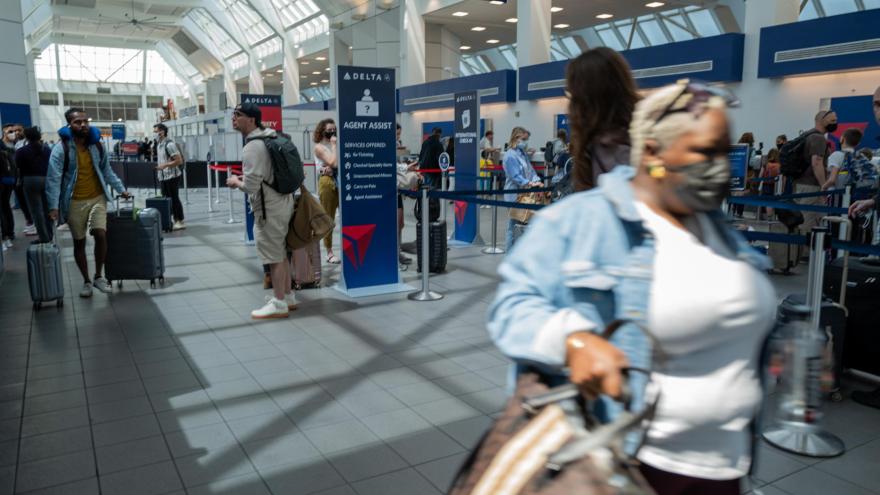 (CNN) -- The last thing any traveler needs after the past two years is more chaos and confusion.

Unfortunately, many air travelers this summer are in for a bumpy ride.

United Airlines on Thursday became the latest US carrier to trim some summer flights.

In an effort to "minimize excessive delays and improve on-time performance" at its hub at Newark Liberty International Airport in New Jersey, the carrier is cutting about 50 daily flights from Newark.

"It's a wise decision that the airlines cut back," says Kathleen Bangs, a former airline pilot and spokesperson for flight tracking site FlightAware.

She cited many factors causing an increased number of delays and cancellations -- among them shortages of pilots and air traffic controllers and overall airline staffing shortages.

And it's happening around the world. Ryanair staff at airports across Europe began a weekend of strikes on Friday, and British Airways workers have voted to strike over pay concerns. If British Airways goes ahead, the move could cause more big problems for travelers this summer.

For the air traveler in the summer of 2022, this all means more strategic planning. Here are some tips to up your chances of getting where you want to go this summer.

Go early, with a buffer

• Fly early. Taking a flight that departs early in the day helps to avoid the cascading effect of delays and cancellations, says Bangs. Bad weather is also more likely to affect later flights.

• And leave plenty of time at the airport. Bangs had a 7 a.m. departure last week out of Houston Intercontinental that had her leaving her hotel at 4:30 a.m.

"And I was a bit surprised that even at that early hour, the two hours I had between arrival at the airport and departure were ALMOST not enough," Bangs said in an email.

The typical recommended two-hour buffer for domestic flights might not be enough right now. "Three hours might be more in order at large airports."

• If you have connections, leave a buffer. Book with two hours minimum between connecting flights, Bangs advises. Tight connections could leave you stranded.

• Leave cushion time for can't-miss events. Don't travel on the day of an important event such as a wedding. Plan to arrive at least one day early.

• Use a carry-on for essentials. Pack anything you'll need within one or two days in your carry-on. Don't check prescription medications or other essentials.

• Or consider traveling only with carry-on luggage. A rolling suitcase plus a "personal item," which Bangs notes can be much larger than a typical purse, can often suffice even on longer trips.

"The odds of two different carriers, a couple hours apart, both getting canceled are still fairly slim," Bangs noted, unless there's a widespread weather event.

• Or consider other back-up transportation. "Having a back-up rental car is a good idea for shorter flights," Bangs said. "Most rental agencies won't charge if you cancel."

• Think about driving. "Consider driving one leg of your trip and flying back home, if you're traveling for a big event. In some cases, this is cheaper than the round trip cost," said Lousson Smith, product operations specialist at Scott's Cheap Flights.

"If the destination is within 7 hours, it might be worth it to drive."

Get your travel tools in order

• Check your airline's website for travel waivers. Sometimes you can easily change your flight when delays and cancellations are likely, Bangs said. Case in point: Delta issued a waiver right before Memorial Day weekend because of inclement weather forecasts.

• Check your credit card's travel coverage. Premium card holders often have insurance that could cover expenses such as meals and accommodation in the event of a delay or cancellation.

• Make sure you have airline apps. If your flight is canceled, reschedule your travel on the airline's app, Bangs advises. You're likely to be able to rebook faster and you'll have access to seats that would probably be filling up as you waited on the phone.

If you have to rebook, do your research and be considerate

• Do your research and work with airline agents. If you have a carrier preference or a route you prefer, speak up.

"Work with them to see if they can put you on a different carrier, or route you through a different city than what they're offering," Bangs advises.

She recently got rerouted through Phoenix rather than Salt Lake City at her request because she preferred to be on a mainline airline rather than a regional carrier and she felt she'd have more options from Phoenix if she got stuck there.

Bangs negotiated a miles credit recently and she has already used it to book a flight this fall.