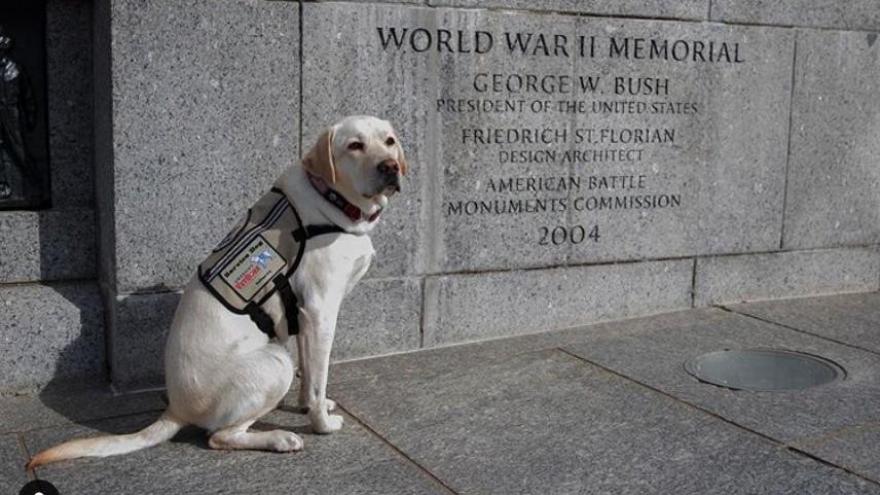 (CNN) -- With his yellow coat and his golden heart, it's no surprise that Sully H.W. Bush is the internet's darling. Excuse us if we can't help but share every little move he makes.

Sully, the former service dog to the late President George H.W. Bush, returned to the spotlight this weekend with a beautiful message for Memorial Day.

"Always thinking of my best friend & the bravest military in the world who made the ultimate sacrifice while defending our country for our freedoms," reads the caption on an Instagram photo of the yellow Lab at the National World War II Memorial in Washington.

The loyal pup even quoted his human friend, George H.W. Bush: "Each of the patriots whom we remember on this day was first a beloved son or daughter, a brother or sister, or a spouse, friend, and neighbor."

Before Bush became the 41st President of the United States, he was a flyboy in World War II. The veteran welcomed Sully to his family in June 2018, with help from his presidential pal Bill Clinton.

"A great joy to welcome home the newest member of our family, "Sully," a beautiful -- and beautifully trained -- lab from @AmericasVetDogs. Could not be more grateful, especially for their commitment to our veterans," read Bush's post on Twitter at the time.

Bush passed away in November at the age of 94. Sully touched countless hearts after a widely shared photo showed the dog lying beside Bush's casket.

In March, Sully started a new job with the US Navy at Walter Reed National Military Medical Center outside Washington. His duties include reducing stress and increasing well-being among patients and staff.