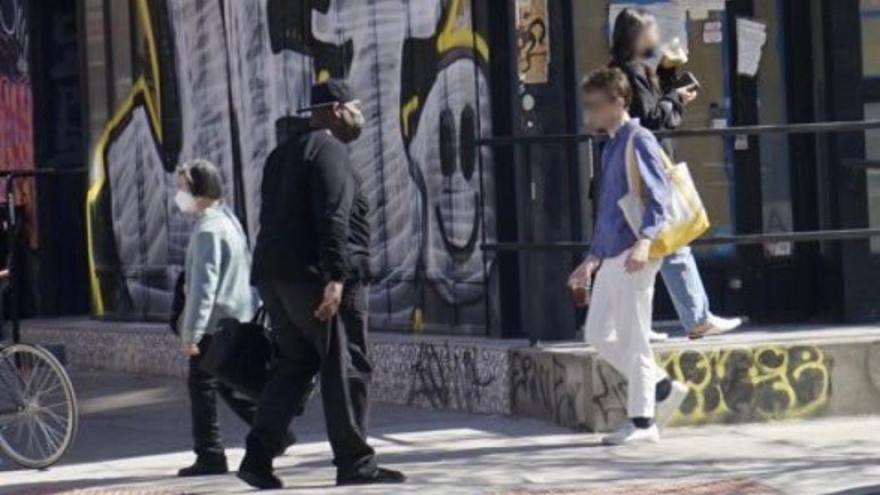 (CNN) -- Frank James, the man arrested after a roughly 30-hour manhunt on suspicion of shooting 10 people on a train headed to a Brooklyn subway station Tuesday morning, will make his initial court appearance Thursday, authorities said.

James was charged in federal court with violating a law that prohibits terrorist and other violent attacks against a mass transportation system, said Breon Peace, US attorney for the Eastern District of New York. If convicted, he could spend life in prison, Peace said.

"We were able to shrink his world quickly. There was nowhere left for him to run," Police Commissioner Keechant Sewell said Wednesday afternoon in a news conference announcing James' arrest.

The timing of James' appearance in federal court will be confirmed Thursday morning, according to US Attorney's Office spokesperson John Marzulli.

James had been named a "person of interest" by the New York City Police Department after possessions of his, including a key to a U-Haul he rented, were found at the scene,authorities said. He was declared a suspect in the shooting Wednesday, and the city issued an emergency alert to residents saying James was "wanted" and asking for tips.

The call dropped moments later and was followed by a 911 call from another person who said they had spotted James, one of the two sources told CNN.

Police responded to the McDonald's and did not find James, sources told CNN, but shortly after, officers came across a bystander who flagged James to them, a senior law enforcement source said. He was arrested without incident.

"Like all New Yorkers, I am deeply grateful that the suspect in yesterday's subway shooting has been apprehended and thankful for law enforcement and every first responder whose heroic efforts helped New York City respond to this horrific incident," New York Gov. Kathy Hochul said Wednesday. "My heart is with all those who are injured, their loved ones, and the entire Sunset Park community."

CNN has reached out to James' federal defender for comment.

The shooting -- which started on a subway train as it approached the 36th Street station in Brooklyn's Sunset Park neighborhoods during Tuesday's morning commute -- left at least 29 people with injuries ranging from gunshot wounds to smoke inhalation. Five remained hospitalized Wednesday evening.

The gunman fired at least 33 times and struck 10 people, according to NYPD Chief of Detectives James Essig. Officials have said none of the injuries appeared to be life-threatening.

James initially got on the subway's N train at the Kings Highway Station at about 8:30 a.m. Tuesday, Essig said.

Hourari Benkada, 27, who was shot in the back of the knee, said he'd gotten into the last car of the N train and sat next to a man with a duffel bag who appeared to be wearing an MTA public transit vest. The man let off a "smoke bomb," he said, and passengers tried to flee as the man then began firing.

The shooting started about 20 seconds after the train left the 59th Street station and felt like it lasted for nearly two minutes, Benkada said.

After allegedly opening fire on the train, James got off at the 36th Street station, boarded an R train across the platform and rode to the 25th Street station stop, Essig said.

Less than an hour later, he was spotted boarding the subway at the 7th Avenue and 9th Street station, about 1.5 miles away, Essig added.

Evidence found by investigators led them to suspect James of the shooting, police said Wednesday.

The gun found at the scene was purchased by James in Ohio in 2011, according to Essig. A credit card that was used to rent the U-Haul was also found, two law enforcement sources told CNN. Two officials told CNN they believe the gun jammed during the shooting.

The U-Haul van was rented by James, police said, and was recovered by police near the Kings Highway station after being cleared by the NYPD's bomb squad.

A neon construction jacket, which had been discarded on the subway platform, had a receipt for a storage unit in Philadelphia registered to James, the complaint states.

According to the complaint, law enforcement executed a search warrant at a Philadelphia apartment authorities believe James rented for 15 days beginning around March 28 and found "an empty magazine for a Glock handgun, a taser, a high-capacity rifle magazine and a blue smoke canister."

Investigators did not find any other weapons or explosives in the van, two law enforcement officials said. The officials said it appeared James may have slept in the vehicle. They said a license plate reader detected the van driving over the Verrazzano Bridge from Staten Island into Brooklyn around 4 a.m. Tuesday.

Authorities also tracked the purchase of a gas mask to James through an eBay account, two officials said.

A motive has yet to be determined, officials said. James has also been linked to multiple rambling videos posted on a YouTube channel that included racist and misogynistic language, and he documented his travel from Wisconsin to the Northeast in a series of videos in recent weeks.