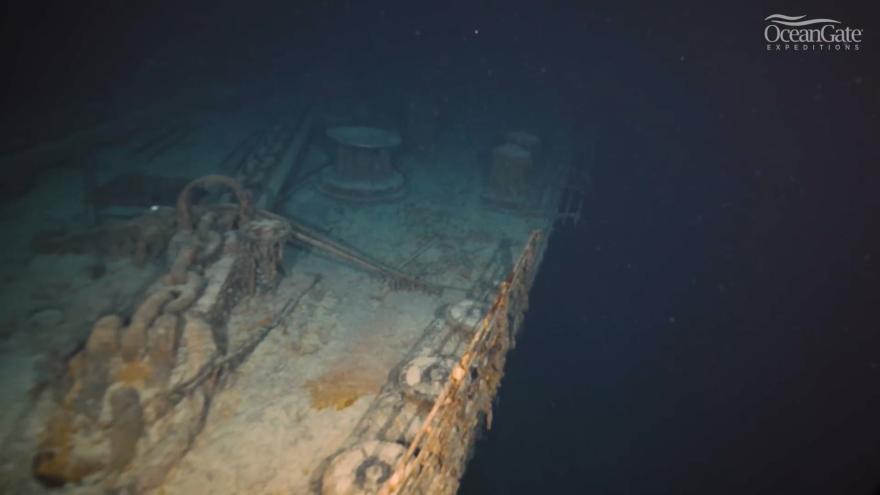 (CNN) -- New footage has been released showing the wreck of the RMS Titanic as it's never been seen before: in full 8K quality, the highest screen resolution currently available.

That's a horizontal resolution of 8,000 pixels, or twice as clear as a 4K TV. And it means there's an unprecedented level of detail and color in this latest exploration of the 110-year-old shipwreck.

The video was captured by OceanGate Expeditions on its 2022 visit to the site, which lies 2.4 miles below the surface of the North Atlantic, some 400 nautical miles from Newfoundland, Canada.

OceanGate runs expeditions to the Titanic wreck with crews of submersible dive experts, Titanic historians, and research scientists, alongside civilian mission specialists" who pay $250,000 for the privilege of being one of the few people to have ever seen the legendary ship's final resting place first-hand.

"The amazing detail in the 8K footage will help our team of scientists and maritime archaeologists characterize the decay of the Titanic more precisely as we capture new footage in 2023 and beyond," said Stockton Rush, president of OceanGate Expeditions, in a press release. What's even more remarkable, he added, is "the phenomenal colors."

The newly released footage opens by panning up the Titanic's bow, which famously sank first after the British passenger liner hit an iceberg on the night of April 15, 1912.

Features of the ship, such as the name of the anchor maker, Noah Hingley & Sons Ltd on the port side anchor, are now visible. "I've been studying the wreck for decades and have completed multiple dives, and I can't recall seeing any other image showing this level of detail," said Rory Golden, OceanGate Expeditions Titanic expert and veteran Titanic diver, in the release.

The green lights seen on the port side anchor as the camera pans across are from the laser scaling system, explained Paul Henry Nargeolet, a veteran Nautile submersible pilot and Titanic diver. "This system allows us to accurately determine the size of objects [...] The distance between the two green lights is 10 centimeters."

"Early in the video you can see the crane used for deploying the enormous 15-ton anchor still located on the deck of the shipwreck and the shackle that was originally attached to the main mast that has now collapse," Nargelot also explained.

Later on in the video we see three round structures along the inside railing. These, said Nargelot, are the triple fairleads which once fed the docking ropes to the bollards on shore to secure the 269-meter vessel when it was at port.

The footage also shows the first of the Titanic's two hulls, its huge anchor chain (each link weighing around 200 pounds), the first of Titanic's six cargo holds, and the ship's solid bronze capstans.

There is also substantial evidence of decay where some of the vessel's rail has collapsed and fallen away.

"In comparing footage and images from [our 2021 expedition], we do see slight changes in certain areas of the wreck," said Rush. "Our science team will be reviewing the 8K, 4K, and other footage captured during the 2022 Titanic Expedition for any changes."

The extraordinary wreck is decaying at a rapid pace. Saltwater and sea pressure have silently been wreaking damage over the past century and more, while microbes eat away at the steel hull, creating thousands of rusticles -- those oxidized orange-green formations that hang off the Titanic like so many thousands of icicles. Some estimates say the ship will vanish in a matter of decades.

OceanGate Expeditions hopes the new footage will help determine the liner's current rate of decay, as future expeditions capture further footage that can be compared year after year.

The video should also help scientists identify species that are observed on and around the Titanic, while archaeologists will be able to document the wreck and debris field in better detail.

Spots are now open for the 2023 expedition, which will set off from Newfoundland in May next year. Those who set off the depths will be one of just two or three hundred to have made the journey -- fewer people than have traveled to space.

Applicants for the 10-day mission (eight days of which are at sea) can contact OceanGate to discuss qualifications, availability and that quarter-of-a-million price tag.