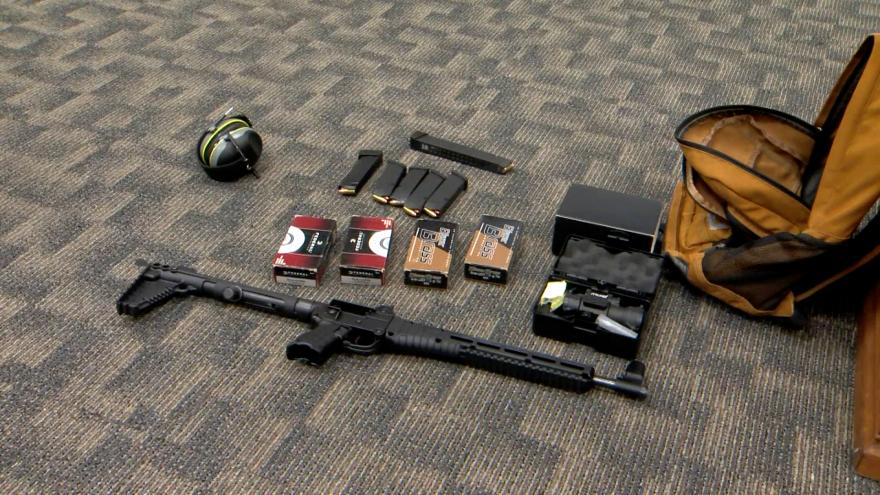 (CNN) -- Police in Florida arrested a student attending Embry-Riddle Aeronautical University for allegedly "plotting to shoot up the campus" on Thursday, which was the final day before winter break, officials said.

John Hagins, 19, threatened an attack similar to the 1999 mass shooting at the Columbine High School in Littleton, Colorado, that left 13 dead, according to Chief Jakari Young of Daytona Beach Police Department. Hagins had a backpack that contained a collapsible rifle, a magazine and several boxes of ammunition when he was taken into custody, he said.

Police said they got involved after two students reported worrying messages they saw on a group chat to the university's campus security team.

"It was a Snapchat group message that they were involved in, and they were very concerned about what was being relayed in this Snapchat group chat," Young said in a news conference Thursday.

After emergency responders were informed by campus security at 4:10 a.m., police rushed to where the suspect lived and detained him as he was coming out of his apartment, Young said. He had planned to go to a shooting range for practice and then to the campus, according to the police.

"Today is the last day, today is the final exams. So this was all a part of the plan because today the campus will be packed because everybody has to be there to take their final exams," Young said.

He added that it was fortunate that the two students reported their concerns. "By the Grace of God those two students came forward and thwarted that plan," he added.

Hagins is now in custody and has confessed to making the statements, Young said.

"He may want to claim that it was all a joke and he wasn't serious about it. But we don't find anything funny about discussing a mass shooting on campus," Young said. "He said once he was done at that firing range, he was going to campus to enact a Columbine."

In a statement, the Daytona Police Department said that Hagins was charged with written threats to injure or kill, terrorism, and attempted first-degree homicide. He will be held without bond for all three charges until his first appearance in front of a judge.

It is unclear if Hagins has an attorney.

"I'm extremely relieved that we are not the next national media story as it relates to a mass shooting on a campus because the intent was there," Young added.

The incident is still under investigation but authorities said the suspect told the police he was acting alone.

"Detectives are still trying to piece together the exact motive, but we have learned that Hagins was in danger of failing classes at ERAU and was also cited for a traffic infraction while on campus yesterday," the police said in the statement.

In a letter to students, ERAU President Barry Butler said that although it was a difficult day, the security systems that are in place worked.

"Law enforcement officers, Campus Safety and our students did an exceptional job today and helped keep our community safe, and we are in their debt," Butler wrote. He added that there is no reason to believe there is any additional threat to the campus community.