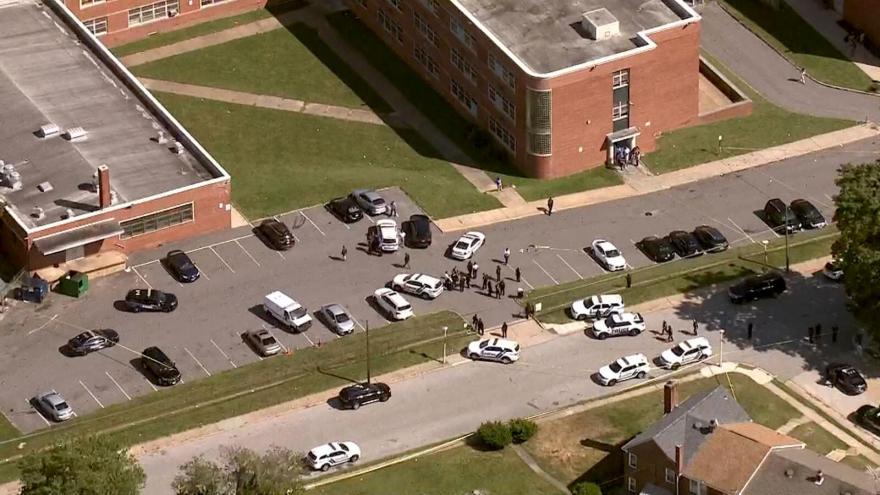 A student at Mergenthaler Vocational Technical High School in Baltimore, Maryland, has died after being shot on September 2 in the school's yard.

(CNN) -- A student at Mergenthaler Vocational Technical High School in Baltimore, Maryland, has died after being shot Friday in the schoolyard, according to Baltimore Police.

School had just started for the year on Monday.

A suspect approached the victim, 17, during dismissal. The encounter became heated, and the suspect produced a firearm, Baltimore Police Commissioner Michael Harrison said at a news conference on Friday.

The alleged shooter ran down the street, and school police apprehended him after a short pursuit without "incident or injury," Harrison said.

Authorities also recovered a firearm that the suspect was seen discarding, he said.

School police performed CPR on the student at the scene, who had life-threatening gunshot wounds, Baltimore Police said in a written statement. The victim was pronounced dead shortly after arriving at a local hospital, the statement said.

"This is an extremely tragic situation, beyond tragic, happening on the grounds of a school in the beginning of the school year," Harrison said.

The person in custody is a student at another high school in the city, according to Harrison. Police have not yet named the victim or the suspect.

The school's safety plan was in place and school police were "at post" during dismissal, Santelises said. Police also said law enforcement were in the school yard during the shooting.

Following the violent incident, Santelises, along with Baltimore Mayor Brandon Scott, met with some students, according to CNN affiliate WBFF. After-school activities were also canceled, according to Baltimore City Public Schools. A large number of students witnessed the shooting, according to Santelises, and the school system is offering grief counseling next week, WBFF reported.

Harrison said the investigation is still ongoing and asked the public to contact police with any information.

Friday's shooting is the most recent incident of violence at the school, also known as Mervo. In April, a student stabbed two classmates during a fight, WBFF reported.