Student interest in this field soared since the pandemic's start. Experts hope this is a turning point 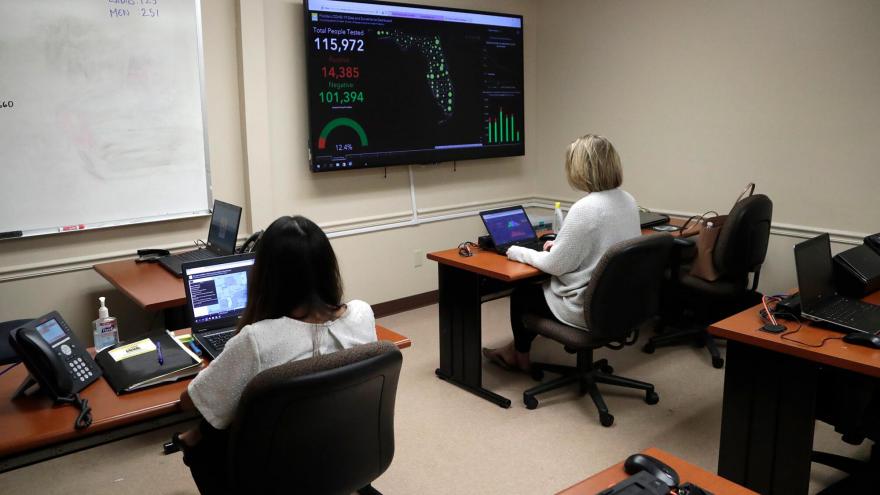 Fields focusing on health sciences have all seen a jump in interest since the pandemic's start.

The decision, McCaskill said, stemmed partly from the sudden heightened awareness about the importance of public health as the virus spread in the US.

"I started to see a lot more happening in the public health realm through news, media and it was everywhere, everything we were hearing," McCaskill told CNN. "I think that kind of helped me to make my decision."

But it's been the soaring interest in public health programs -- which before the pandemic saw a dip in applications -- that is particularly encouraging to some officials, who say the field, long underfunded and understaffed, is critical in helping tackle not just this virus, but other emergencies plaguing US communities.

But even as more applicants are trickling into public health, some experts worry that won't necessarily translate to more graduates eyeing the positions that are in desperate need of officers -- including in US health departments.

"The work of state and local health departments is hard. It's grueling work. It's extremely rewarding work but at the same time it doesn't pay very well, it's not competitive with the private sector," said Lori Tremmel Freeman, CEO of the National Association of County and City Health Officials (NACCHO).

"So it's good news and it's bad news," Freeman said.

What is public health?

The Covid-19 pandemic proved why preparedness and prevention are critical.

And public health is just that.

Local health officers' responsibilities can include anything from making sure people get their annual flu shots to conducting restaurant inspections, educating the public about substance abuse, healthy diets or running STD prevention campaigns.

"Public health ultimately is about the conditions that create health for people," said Sandro Galea, dean of the Boston University School of Public Health. "They are the characteristics of where we live or work or where we play."

But most of us had little to no interaction with public health professionals before the pandemic. Since then, epidemiologists and infectious disease experts -- like Dr. Anthony Fauci -- have taken center stage, appearing daily on the news with insight and advice.

And that helped thrust the field into the spotlight. During last year's application cycle, public health program applications jumped by 23%, with the biggest increase coming after March 2020, said Laura Magaña, the President and CEO of the Association of Schools and Programs of Public Health (ASPPH).

In the 2021 cycle, applications have so far increased by about 39% since the same time last year.

"It is a clear effect of the pandemic," Magaña said. "Public health became really visible and people understand its importance."

The pandemic, Magaña said, in combination with a younger generation passionate about issues like social justice and climate change -- both of which have been at the forefront of global conversations in the past year -- likely led to the jump in applicants.

How public health can help communities

Catherine Allende, who was recently accepted into Harvard University's School of Public Health for a Masters in Epidemiology said it was the health disparities that exist in the US -- and watching how they were exacerbated by the pandemic -- that pushed her to apply.

Racial and ethnic minority groups in the US were hit hardest by the virus, reporting higher rates of hospitalization for Covid-19 and seeking emergency care more when compared to White people, recent studies showed. The findings highlighted the "need to address health inequities in our country," CDC Director Dr. Rochelle Walensky said last month.

Allende, 24, has experienced those disparities first hand. Her parents, who are both from Peru, speak limited English. And language was "an unfortunate barrier to health in this country," Allende said, as the family battled her father's tuberculosis and her mother's breast cancer diagnoses.

Once she graduates from her public health program, Allende said she wants to home in on public health for vulnerable communities in the US.

"In all aspects of my life, I feel like it all comes down to preventing disease," she said. "But because of the pandemic, I thought this was the best moment to apply."

"Much of the work and the importance of public health on the ground is considering how to create (healthy) conditions," Freeman said. "Removing the fear of violence, kids being able to go outside and play ... having a livable wage, so you can afford food for your family... and you have access to groceries."

"That is the true work of prevention in public health," she added. "And that's what we're working toward."

With the rise in applicants to public health programs, officials report there's been an increase in applications from students of color -- including Black, Hispanic and Latino Americans.

"That, for us, is just amazing," Magaña said. "What we all want is to have a workforce that represents the geographic and the demographic representation of your community."

And today, the public health workforce severely lacks representation. Less than 10% of local health departments' top executives are people of color, according to 2019 data from NACCHO.

"We have a tremendous gap in terms of diversity in these positions," Freeman said.

The impact can be devastating. For example, as the country races to vaccinate as many Americans as possible against Covid-19, that lack of diversity often meant there were no trusted messengers to reach different communities and help build vaccine confidence and address hesitancy.

"That's why it's important that ... our leadership and our health departments really truly represent the communities that they work to keep safe and healthy," Freeman said.

Allende, who works in a cancer research and treatment institution, was tasked with calling community members of color to educate them on the vaccine. She says that as a Spanish-speaking employee, she often receives feedback from residents who express relief at being able to receive that information from her on the phone, rather than from social media or other large outlets.

"Our country... has had some unfortunate medical mistrust due to historical events," Allende added. "Having that representation of diverse public health professionals, I feel, will definitely make an impact on creating a healthier country."

Hope for a turning point

The surging student interest comes at a particularly challenging time for the public health field.

Local and state health officials were often under attack as the pandemic unfolded, targeted over mask orders or restrictions that aimed to curb the spread of the virus. Some, exhausted or in other cases fearful for their lives, opted to leave their posts. Others were fired.

"State and local health officers (are) trying to stem the tide of a massive epidemic in an environment in which they themselves have been politicized," NYU's Healton said.

Many are burned out.

"We have to find a way to replace the exodus that has occurred," Freeman said.

Health agencies -- both public and private -- remain the top employer for graduates of these programs, Magaña said. But demand from the private sector is rapidly growing -- including from pharmaceutical and insurance companies, health consults and large corporations, which are now seeking more public health expertise to create new programs or applications, Magaña said.

Some experts are optimistic the newfound visibility could be a turning point for the country's long underfunded and neglected public health infrastructure and could also translate to a broader understanding of what public health is among the general population.

"What this turning point could do is greatly strengthen the system on a global scale and reduce the probability that this will happen," Healton said. "This (the pandemic) should not have happened. It could have been stopped."

"The Covid moment has shown us that, if it's shown us nothing else, that we have had a long-standing underinvestment in creating enough people for public health," said Boston University's Galea.

And that's what experts hope can change now.