Student debt: What Biden is doing (and not doing) 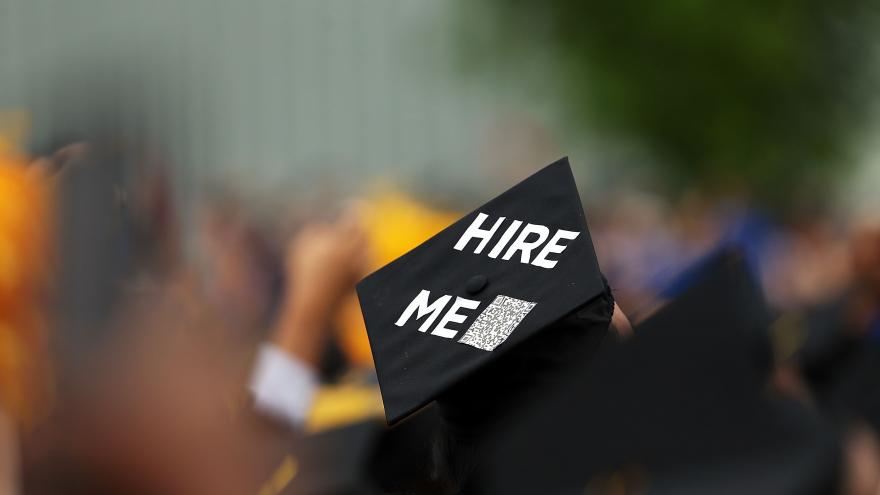 (CNN) -- There have been good and bad headlines related to student loans in recent days.

I went to Katie Lobosco, the CNN writer who covers student loans, for a better understanding of how much student debt exists, who holds it, and what else the government might do about it.

Our emailed conversation, edited slightly, is below.

A massive pile of debt

WHAT MATTERS: First, can you lay out how big of an issue student debt is in the US? How much is owed and by how many people?

LOBOSCO: It's big. Americans owe nearly $1.8 trillion in student loan debt -- more than they owe on either credit cards or auto loans, according to the Federal Reserve.

A majority of the student debt is owed to the federal government and held by about 43 million people, according to Federal Student Aid. That's roughly 17% of adults who are 18 years of age or older.

The total amount of outstanding student debt has steadily grown since at least 2006.

But I think it's worth noting that today's college students aren't borrowing as much as they used to. Annual student loan borrowing peaked during the 2010-2011 school year and college students have borrowed less money every consecutive year since then, according to The College Board.

Whose money is this?

WHAT MATTERS: Who owns all of this debt and how is it able to be canceled?

There are a number of repayment programs offered for federal student loans. Many of them tie monthly payment amounts to a borrowers' income and can even be as low as $0 a month. Some of those income-based payment plans will cancel the amount of outstanding debt left over after a set period of time. There is also a 10-year forgiveness program specifically for borrowers who work in the public sector.

The federal government will also forgive student debt for borrowers who have been defrauded by their college as well as borrowers who are permanently disabled and can no longer work.

Some prominent Democrats, including Senate Majority Leader Chuck Schumer and Massachusetts Sen. Elizabeth Warren, argue that President Joe Biden can and should use his executive authority to more broadly cancel federal student loan debt, calling on him to forgive $50,000 per borrower.

Last year, Biden directed lawyers at the Department of Education and the Department of Justice to evaluate whether he does, in fact, have the power to do so -- but the administration has not disclosed those findings. Biden has said he supports Congress using its legislative authority to cancel up to $10,000 per borrower.

What's happening and what is not going to happen?

WHAT MATTERS: What has the Biden administration done to forgive debt, what does it want to do, and what is it unlikely to be able to do?

LOBOSCO: Under Biden, the Education Department has approved about $16 billion in federal student loan discharges for more than 680,000 borrowers -- more than during any previous administration.

Most of those efforts have focused on reaching people who were already eligible for some debt relief, but were waiting on paperwork to be processed. The department has been chipping away at a backlog of forgiveness claims filed under a policy known as borrower defense to repayment that allows former students who were defrauded by their colleges to seek federal debt relief. Under that policy, the Biden administration has canceled about $2 billion from more than 107,000 individuals who attended for-profit colleges like ITT Technical Institute and DeVry University. The department also improved efforts to reach borrowers eligible for debt relief because of permanent disabilities.

The Biden administration also overhauled the Public Service Loan Forgiveness program that cancels outstanding federal student loan debt for those who work in the public sector after they've made 10 years of payments. It temporarily expanded the eligibility criteria so that it applies to borrowers who have older loans that didn't originally qualify as well as those who were in the wrong repayment plan but met the other requirements -- until October 31. The expansion has resulted in almost $5 billion in debt relief for 70,000 borrowers so far.

Biden has also extended the pandemic-related pause on federal student loan payments, interest, and collection. Essentially, borrowers have not had to make any payments since March 2020. The benefit is now set to expire May 1.

The Education Department is likely to continue all of these efforts aimed at targeted debt relief. It also has plans to rewrite a rule known as Gainful Employment that aims to prevent students from taking on too much debt to attend predatory for-profit colleges. The rule was revoked by the previous administration.

I think it's unlikely that we'll see the Biden administration broadly cancel student debt, especially for high-income earners. Biden has argued that the government shouldn't forgive debt for people who went to "Harvard and Yale and Penn." He's also indicated that he believes Congress should make changes through legislation, which would make them harder to undo. A recent speech from Education Secretary Miguel Cardona that outlined the department's priorities for the upcoming year did not mention any forthcoming broad student deb cancellation.

LOBOSCO: While the Trump administration made it harder for borrowers to qualify for some forgiveness programs, the Biden administration is making it easier.

WHAT MATTERS: While we're on the subject of student debt, let's pivot to payment deferral. Federal loan payments were paused during the pandemic and are set to restart in May. What do people with student debt need to do?

LOBOSCO: Borrowers should be receiving a billing statement or other notice at least 21 days before their payment is due. It should be sometime on May 1 or after. Not all borrowers' monthly payments are due on the same day.

Borrowers who had previously set up auto payments may need to notify their loan servicing company they want those to continue. If he or she can no longer afford their monthly payment, they may be eligible for an income-driven repayment plan. Under those plans, which are based on income and family size, a monthly payment can be as low as $0 a month. The Department of Education has more information online about the payment restart.