Struggling factories and booming airlines put Fed in a bind 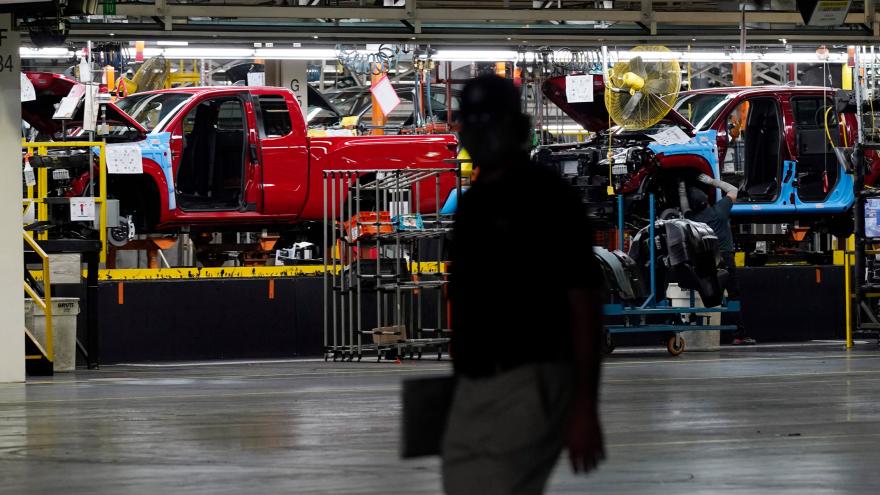 (CNN) -- How should policymakers react when two core parts of the economy are headed in different directions?

That's the question facing the Federal Reserve and its international counterparts as they race to contain surging inflation.

On one hand, spending on services like flights is booming as people in the United States and Europe take advantage of eased coronavirus restrictions.

"Demand is stronger than I've ever seen in my career, and that's even before business travel fully recovers," United Airlines CEO Scott Kirby told analysts on Thursday. Shares of United rallied more than 9% after it reported earnings.

Yet manufacturing is under pressure as the war in Ukraine pushes up the price of energy and key components and continues to scramble global shipping.

Alcoa saw its shares sink 17% on Thursday after it warned that supply chain disruptions could hurt demand, even as prices for aluminum remain high.

Supply chain problems "existed prior to the war in Ukraine, but that war has exacerbated them," Alcoa CEO Roy Harvey said Wednesday, pointing to the worsening situation for carmakers. "It's also creating some knock-on impacts that are happening around whether the economy continues to grow as it did."

More evidence: The Purchasing Managers' Index for the 19 countries that use the euro, which published Friday, revealed that activity in the services sector was at an eight-month high, while manufacturing output hit a 22-month low.

He noted that manufacturing "came close to stalling due to ongoing supply constraints, rising prices and signs of spending being hit by risk aversion due to the war," while there was a "record surge in spending on activities such as travel and recreation."

In the United States, manufacturing looked strong in March, but appears to be softening. A survey of local manufacturers from the Federal Reserve Bank of Philadelphia released this week showed that growth continued in April but at a slower pace.

How to respond: This data presents another huge challenge for central banks as they pull back support for the economy and try to put a lid on the highest inflation in decades.

Fed Chair Jerome Powell and European Central Bank President Christine Lagarde want to respond aggressively enough to stop the run-up in prices, but they don't want to be so tough that they trigger a recession. When parts of the economy diverge, that job is made even more difficult.

Lagarde, meanwhile, said Thursday that the ECB continues to monitor the economic data, though she did not rule out an interest rate increase in July.

"What makes the job challenging is that you need to navigate between keeping inflation under control ... but we also need to make sure that, you know, there is financial stability [and] there is support to the economy," Lagarde told CNN's Richard Quest.

Musk lines up $46.5 billion in financing for Twitter bid

There were questions about whether Elon Musk would be able to pool together enough money to finance his bid to take Twitter private. No longer.

The latest: The Tesla CEO said Thursday that he'd lined up commitments worth $46.5 billion for a Twitter deal, using a combination of debt and cash.

Although he's the richest person in the world, much of Musk's wealth is tied up in Tesla stock. It was thought that it might be difficult for him to raise debt against those shares given their historic volatility.

So where's the money coming from?

Musk said Morgan Stanley and other lenders had committed to putting up more than $25 billion in debt, using his Tesla stock as collateral for part of it.

Musk is then expected to cough up an additional $21 billion on his own.

Next steps: In a filing with the Securities and Exchange Commission, Musk said that he has yet to receive a formal response from Twitter's board. Last week, he made an unsolicited offer to acquire all shares of the company he doesn't own for $54.20 a piece, valuing Twitter at around $41 billion.

Musk said he is "seeking to negotiate" a definite acquisition agreement and "is prepared to begin such negotiations immediately" — an apparent reversal from his previous position that $54.20 per share was his "best and final" offer.

That means the ball is now with Twitter's board to evaluate Musk's proposal and decide how to move forward.

French election could be bigger shock to markets than Trump

French voters are expected to hand Emmanuel Macron five more years in office on Sunday, favoring the president over far-right candidate Marine Le Pen after a strong showing in a fierce debate. But investors remain on edge.

With polls indicating the presidential election is narrower than when the two candidates faced off in 2017, traders are girding for a surprise Le Pen win, which would rattle Europe's second biggest economy as fears of a recession in the region grow.

In research published on Tuesday, strategists at Citi put the probability of a Le Pen win at 35%. Still, they encouraged clients to hedge their bets on French government bonds, and cautioned that a Le Pen win would hurt stocks.

"Uncertainty stems from the risk of low voter turnout, as leftist voters refuse to give their vote to Macron, even at the risk of handing over to Le Pen," they wrote. "Voter turnout is a factor that pollsters find particularly hard to forecast accurately."

Victory for Le Pen would immediately raise questions about France's political and economic ties to the European Union, even though she has dropped her pledge to take the country out of the bloc. Her policy goals — like stopping foreign workers from coming to France, which would end freedom of movement in Europe — could still create serious conflict.

"Most of [Le Pen's] policies would not be possible inside the EU," said Grégory Claeys, a senior fellow at Bruegel, a think tank in Brussels.