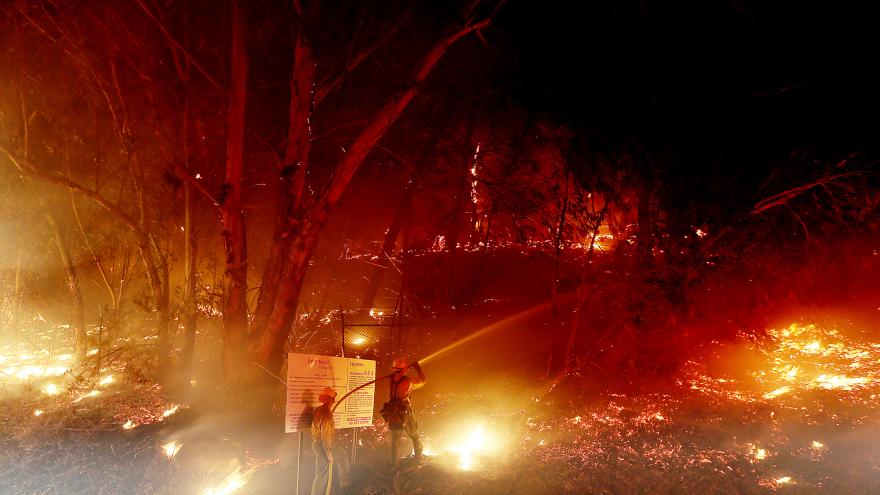 (CNN) -- The heavy winds that have been fanning the Alisal Fire -- which already closed part of Highway 101 and Amtrak railways in Santa Barbara County, California -- are likely to continue through early Thursday morning, possibly hindering progress and triggering power outages.

"When the winds are strong and they shift, it isn't good for firefighters. And that will continue to take place into the weekend," CNN Meteorologist Michael Guy said.

The fire has grown to 15,442 acres since it sparked Monday about 20 miles northwest of Santa Barbara in Refugio Canyon, according to InciWeb. The fire has prompted local officials to issue evacuation orders and caution residents about poor air quality caused by the smoke.

While crews have been able to reach the upper end of the fire, other parts have been inaccessible, Matt Ferris, deputy incident commander with the Santa Barbara County Fire Department, said Wednesday during a news conference. Containment remained at 5% Wednesday.

"We are unable to drop down the sides -- east and west -- because of the turbulence and the high wind velocity," Ferris said.

And on Sunday, "winds will begin to shift back to an onshore flow, lowering temperatures and increasing humidity levels along the coast, which will help the fire fighting going into next week," Guy said.

California has experienced a devastating wildfire season that has been exacerbated by the climate crisis, which has been creating ideal weather conditions for fires to spark and quickly expand.

Cities including Santa Barbara, Montecito and Carpinteria are under a wind advisory issued through 3 am PT Thursday, according to the local NWS, which predicted winds may reach 15 to 30 mph with gusts up to 45 mph.

"Gusty winds will blow around unsecured objects and make driving difficult, especially for high profile vehicles. Tree limbs could be blown down and a few power outages may result," NWS said in the advisory.

Highway 101 and train lines are priority

Meanwhile, firefighters battling the Alisal Fire are prioritizing opening the closed section of the iconic Highway 101 and the shuttered Amtrak lines. At least 1,600 personnel are responding to the fire, with more expected to join the effort.

Crews were also sent to protect former President Ronald Reagan's Rancho del Cielo -- which is "several miles" away from where the fire is burning, local officials said.

"Smoke and ash from the Alisal Fire could affect local air quality. Strong winds, locally and across the state, are also stirring up dust and ash into the air," officials said in a news release, urging residents to be cautious.

"This is a dynamic situation, and local air quality conditions can change quickly."

California is currently fighting 10 large active fires, according to the National Interagency Fire Center. One of those fires, the KNP Complex Fire, has already destroyed many of the state's iconic sequoia trees. That fire was 40% contained late Wednesday after charring nearly 88,000 acres since September 10, according to InciWeb.