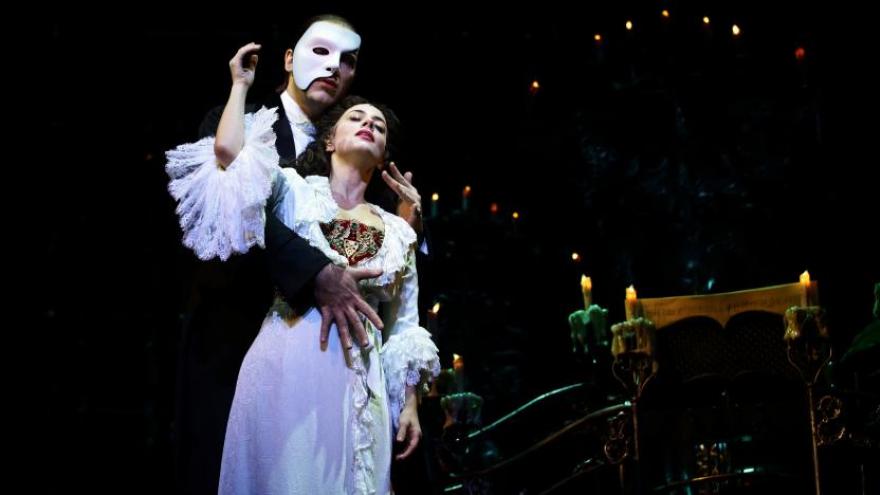 Performer Jonathan Roxmouth plays 'The Phantom' and Meghan Picerno plays 'Christine Daae' in the musical, "The Phantom Of The Opera" during a media preview at the Sands Theatre at Marina Bay Sands in Singapore.

(CNN) -- Musical lovers, it's time to pause whatever you're watching on Netflix.

Andrew Lloyd Webber's "The Phantom of the Opera," staged at London's Royal Albert Hall in 2011, is now available to stream free on YouTube for this weekend only. So grab some snacks, dim the lighting, and get ready to bring Broadway into your living room.

The free musical is available on Webber's "The Shows Must Go On" YouTube channel. Viewers are invited to donate to The Actors Fund, which is raising money for Covid-19 Emergency Relief.

"During these unprecedented times, charitable organizations continue to make heroic efforts to help those affected byCOVID-19," the video begins.

The organization, which supports performers and behind-the-scenes workers in performing arts and entertainment, has so far raised over $250,000.

The musical, starring Ramin Karimloo, Sierra Boggess and Hadley Fraser, will be available on YouTube everywhere until Sunday at 2 p.m. EST. The show was taken down at 7 p.m. in the UK 24 hours after it was streamed due to rights restrictions.

As the coronavirus pandemic continues to hit the US -- particularly New York City, which is home to many live theater shows -- the Broadway League announced that all shows would be suspended through June 7.

Webber launched the channel to offer passionate theater fans around the world a chance to continue watching some of their favorite hit musicals right from home.

"Universal have come up with the idea of a whole series now called 'The Shows Must Go On,' which is about musicals going from stage to screen and they're going to show one of mine every Friday for the next few weeks," Webber said in his official video announcement of the series.

The free musicals began on April 3 with Webber's "Joseph and the Amazing Technicolour Dreamcoat" and "Jesus Christ Superstar" on April 10. The channel also features behind-the-scenes footage and scenes from other musical performances.