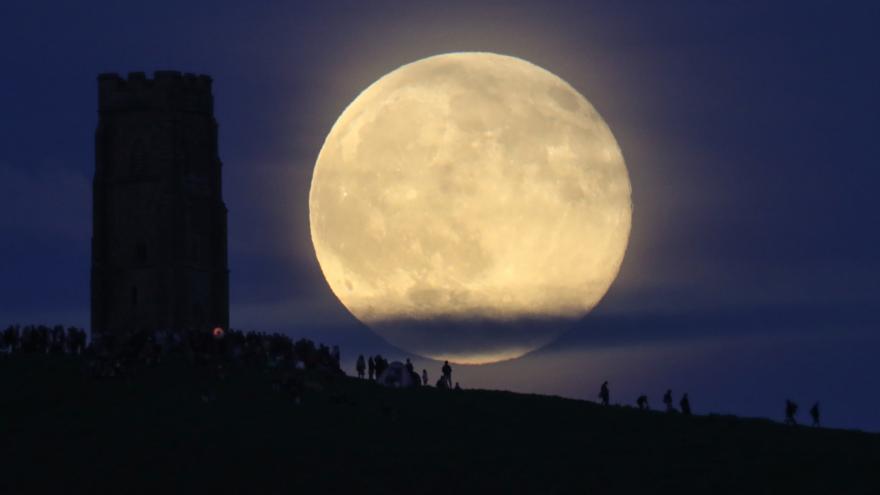 (CNN) -- It's time for another noteworthy celestial event. Be sure to cast your gaze toward the sky for this year's Strawberry Moon.

So you're not disappointed or confused, first things first: The moon isn't going to actually look like a big, round strawberry.

That's because in North America, the name comes from Algonquin tribes of Native Americans. This full moon was their sign to harvest wild strawberries, according to The Old Farmer's Almanac.

In Europe, you may hear it called the Honey Moon or Mead Moon. In fact,the tradition of calling the first month of marriage the honeymoon may be tied to this full moon, either because of the custom of marrying in June or because the Honey Moon is considered the "sweetest" moon of the year, NASA says.

How so? The time around the end of June was when honey was ripe and ready to be harvested from hives or from the wild, some writings have suggested, according to NASA. The word "honeymoon" traces back to at least the 1500s in Europe.

What's the best time to see it?

The peak of the full moon happens depending on your time zone.

In the Eastern Time Zone of the United States, the next full moon will be on Friday afternoon, June 5, at 3:12 p.m, although it won't be visible until dusk. In the United Kingdom, it will appear at 8:12 p.m.

See the upper right side of the timeanddate.com page to get the time for your location.

But remember, peak time doesn't mean your only viewing time. The moon will appear full for about three days around this time, from early Thursday morning into early Sunday morning, said NASA.

For the best impression, take a look not at peak time but while the moon is still low on your horizon, said CNN meteorologist Judson Jones.

"My favorite time to watch the full moon is as it is rising over the eastern horizon. When the moon is low on the horizon, it allows you to capture the view with objects in the foreground, making the moon appear bigger," Jones said.

"Say you are in the city, and you're watching between a couple of buildings or over the skyline, it will make it feel that much bigger and give it more impact." He addded that if you're around the ocean, a lake or mountains, the perspective could be very pleasing.

On June 5, the moon will also pass through part of the shadow of the Earth, causing a partial penumbral eclipse. It won't be visible in North America, but people in Europe and Africa and eastward to Asia and Australia may see a very subtle darkening of the moon's color.

For those who like to follow earthly and celestial events, we've got the summer solstice coming up in acouple of weeks — on Friday, June 20.

And the next full moon after the Strawberry is the Full Buck Moon on Sunday, July 5.