Storms kill at least 8, with tornadoes, flooding and crippling ice still in the forecast for eastern US 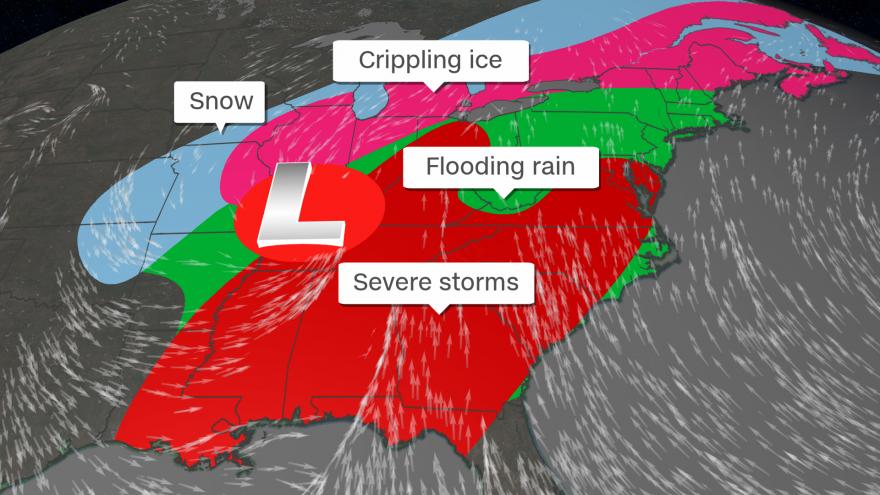 (CNN) -- At least eight people have died as a result of storms bearing down Saturday on the eastern half of the United States, authorities say, with dangerous winds and tornadoes in the South and potentially crippling snow and ice in the Midwest still possible through the weekend.

Hundreds of flights have been canceled or delayed at Chicago's O'Hare International Airport as the city faced wintry precipitation and strong winds.

The storms are primarily hitting the Southeast and Midwest and will reach the Northeast into early next week.

Here's how regions are being affected:

Across the central US and the South, severe storms are marching east, impacting the entire Mississippi River and Ohio River valleys.

Tornadoes were reported Friday and Saturday in Oklahoma, Missouri, Arkansas and Alabama, and more are possible throughout the Southeast. The National Weather Service issued a watch Saturday afternoon for parts of Alabama, Florida and Georgia until 9 p.m. EST (8 p.m. EST).

The storms have led to the deaths of at least eight people across the South since Friday night: two in Texas, three in Louisiana and three in Alabama:

• In Texas: A vehicle fatally struck a firefighter and a police officer on an icy Interstate 27 in Lubbock while the pair were dealing with two previous crashes on the highway, Lubbock Police Chief Floyd Mitchell said. A second firefighter was struck and was in critical condition at a hospital.

• In Alabama: Storms killed three people Saturday in Pickens County, in the western part of the state, Sheriff Todd Hall said. The severe weather also wiped out the homes the people were, the sheriff added. The deaths happened near the town of Carrollton, CNN affiliate WBMA reported.

• In Louisiana: A severe storm demolished a home in Bossier Parish on Friday night, and an elderly couple were found dead nearby, authorities said. And in Oil City, a tree fell on a home, killing a man, Caddo Parish Sheriff Steve Prator said.

• In Ohio: The Cleveland office of the National Weather Service said Saturday afternoon the strong weather front made for a 29-degree temperature difference between Cleveland's airport (70 degrees) and Lorain's airport (41 degrees), which is 20 miles away.

Heavy rain and strong winds were pounding parts of the South, downing power lines along the way.More than 312,000 homes and businesses were without power in nine states -- Texas, Louisiana, Arkansas, Mississippi, Alabama, Tennessee, Kentucky, Ohio and West Virginia -- by 4:30 p.m. ET, according to the online project PowerOutage.us.

Downed trees and power lines littered some Louisiana roadways. Parts of Interstate 20 were closed near Minden on Saturday morning, and state police asked motorists to avoid the area if possible.

Storms demolished a couple homes around the southwestern Missouri community of Fair Play, about a 140-mile drive south of Kansas City, CNN affiliate KOLR reported. A possible tornado was reported in the area, the National Weather Service said.

In College Station, Texas, Dylan Becton said he was watching the storm outside his home Friday when he heard something smack his roof.

"Trampoline poles (carried by the wind) ... came right through the roof," he said.

Inside, two of the poles protruded from the ceiling -- one above one room, and one above another.

Flood warnings and watches were in effect in many states the long line of storms is hitting Saturday. Strong, damaging winds are expected Saturday across the South. Some storms could produce hail as big as small marbles.

In the North: Crippling snow and ice, and strong winds

Winter weather advisories have been issued in areas from Kansas to Michigan, with severe ice and snow in the forecast.

In Chicago, strong winds -- including gusts over 50 mph -- accompanied light snow and rain Saturday morning. More than 900 flights to or from Chicago's O'Hare International Airport were canceled Saturday, and more than 150 others were delayed, according to tracking website FlightAware.com.

Sleet, freezing rain and snow are expected around the city throughout the day. Winds were building up large waves on Lake Michigan, threatening lakeshore flooding in the Chicago area, the National Weather Service said.

"Ice storms can be extremely dangerous," CNN meteorologist Dave Hennen said. The amount of ice forecast for Michigan could bring down trees and power lines, which could cause widespread power outages.

"Power could be out for days, with temperatures below freezing," he said. "Ice storms can cause deadly travel conditions, worse than even a foot of snow. Four-wheel drive vehicles and trucks are no match for the kind of ice that is forecast."

A foot of snow could fall in Des Moines through Sunday, with at least 8 inches of snow in southern Wisconsin and northern Michigan.