Storm systems may cause a headache for Thanksgiving travel 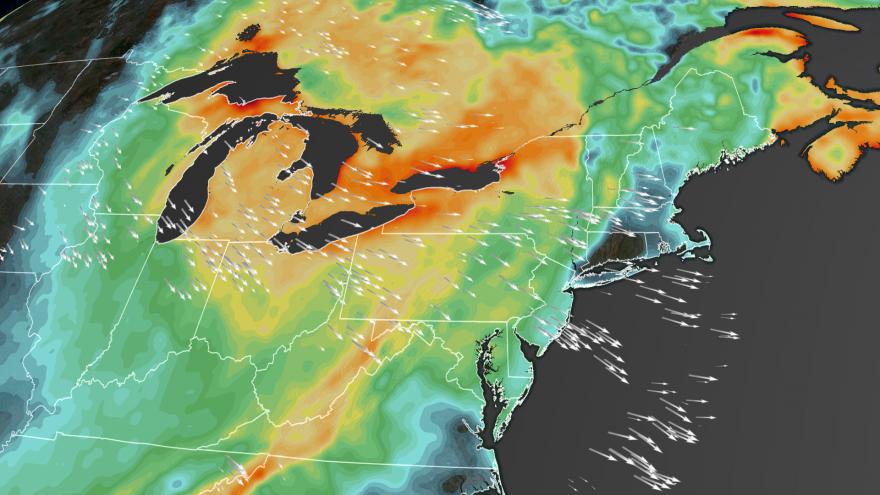 (CNN) -- A significant storm system is forecast to bring powerful winds, which could mean disruptions at major airports Monday through Wednesday. It may not pack a hefty punch of precipitation. Still, the precipitation will be a nuisance and bring blustery winds more fit for Christmas travel than Thanksgiving travel.

"Deepening low pressure should allow for a period of breezy/gusty winds across much of the East Monday and Tuesday and possibly into the middle and latter parts of the week across the Northeast as low pressure lingers offshore," the Weather Prediction Center (WPC) reported.

The two most common airport delays are low ceilings -- low clouds -- and wind during the winter months.

"The combination of airport surface winds and low ceiling and visibility conditions account for about 75 percent of delays," the Federal Aviation Administration explained.

Along with the winds will come unseasonably cold temperatures, some snow, and rain early in the week.

Another 'significant storm' is possible later in the week, the Weather Prediction Center noted.

Here is a day-by-day breakdown of what to expect.

This will by far be the best day to travel all week since the vast majority of precipitation will only happen in the intermountain West. Snow and rain showers will occur in areas of Idaho, Montana, Wyoming, Utah, and western Colorado.

Some thunderstorms are also possible in southern Florida throughout the day.

The storm system begins to take shape across the Midwest.

Rain showers are possible in the region Sunday morning and then maybe even some snow showers in the evening. But the wind picking up could steal the show.

The wind combined with the cold could send the "feel's like" temperature down into the upper teens or single digits.

"A little farther east, a wintry mix could develop over the northern Mid-Atlantic Sunday morning," the WPC said Friday.

Some light rain could creep into the Northeast Sunday evening ahead of the cold front.

The exact timing of the rain is still uncertain, but it is likely from any time Sunday night to mid-afternoon Monday as the cold front sweeps through. The front will stretch from Florida to Maine through the morning hours. By midday, the front is off the coast and dry conditions will settle in for most.

"Moderate to heavy rainfall should continue into parts of New England though with the heaviest totals (in excess of an inch) across far northeast Maine on Monday," the WPC said in its forecast.

Lake-effect snow is also possible on the east side of the Great Lakes.

As of Friday afternoon, the low pressure expected to form along the coast will stay far enough offshore to prevent the major metro areas from seeing any increased precipitation.

However, the storm system will intensify winds across the region leading into Tuesday.

The coastal low will crank up the winds in the Northeast.

Northwest winds of 15 to 25 mph with gusts of 25 to 35 mph, with the strongest near the coast, are possible throughout the day, the New York NWS projected.

The winds will impact flights across the region. And it won't just be the impact to the planes; anyone working on the ground outside will have to deal with extremely blustery conditions.

"In fact, Tuesday highs will most likely be in the 40s (20s in mountains) for most areas with lows in the 20s for most areas," the NWS in Washington, DC said. "This will make it feel more like late December (normal high for December 25th is 47 degrees at DCA and 45 degrees at BWI)."

Out in the Pacific Northwest, it may be slightly warmer. Still, another storm system will move in early Tuesday morning, bringing more rain to the saturated region.

Not much changes as the Pacific Northwest continues to see rainfall while gusty winds will continue in the Northeast.

The storm in the Northeast may take its time exiting the region, leaving some gusty winds, rain and snow showers in New England. Models have trended on a quicker exit, but it is still too early to nail down timing.

If you are skiing this holiday weekend, you are in luck as snow showers are possible for the Intermountain West. The snow may even dip down to the lower elevations, including Denver, Salt Lake City and Cheyenne, Wyoming.

A storm entering the Midwest will begin to ramp up and pull in moisture from the Gulf of Mexico. This will produce an expanding area of moderate to heavy rainfall from eastern Texas into parts of the Lower Mississippi Valley.

Moderate to heavy rain will continue Thanksgiving Day for much of the South from Texas to Tennessee with up to 2 inches possible in some locations.

Temperatures rebound mostly back to normal by Thursday for much of the eastern half of the US, but keep in mind "normal" can still be cold.

For example, New York will likely see temperatures in the low 40s, so for anyone venturing out to watch the big morning parade, make sure you bundle up!

Friday into the Weekend

The return trip could be dicey for some as the Midwest storm system continues to push east. The models do not agree on the intensity or timing of the storm.

One computer weather model shows mainly rain across the Southeast. While the other brings rain, ice and snow into the Northeast. It will be certainly something meteorologists and travelers alike will keep their eyes on.