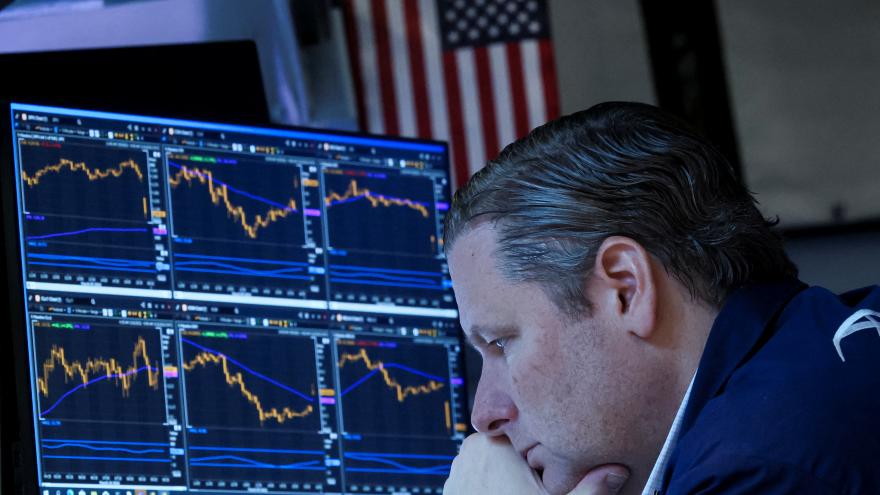 (CNN) -- So much for Wednesday's big market rally.

Stocks slid Thursday after the US government reported a significant spike in consumer prices. Inflation is clearly not going away, and that means the Federal Reserve is probably going to have to aggressively raise interest rates.

The Dow dropped 112 points, or 0.3%, finishing off its lows for the day but still giving up some of Wednesday's gains. The Dow has now fallen in eight of the last ten trading sessions.

It's been a rough March — and a tough 2022 — on Wall Street. Stocks are on track for a three-month losing streak. Even before Russia's invasion of Ukraine sent oil prices skyrocketing, investors were worried about inflation.

The Fed, which has left interest rates near zero since slashing them at the start of the Covid-19 pandemic in March 2020, is now getting ready to start raising rates in order to tamp down further inflationary pressures. The hope is that the Fed does it in a slow, steady and orderly fashion.

"The Fed will not have to panic," said Tony Roth, chief investment officer with Wilmington Trust. "We're likely to get five or six rate increases this year."

Roth added that the Fed probably will remain cautious as long as the Russia-Ukraine war is going on because that could create more downside risks for the economy.

But there are growing worries that the Fed has to do even more to tackle inflation.

"The Fed is absolutely behind the curve. They are now nine to twelve months late," said Steve Chiavarone, head of multi-asset solutions for Federated Hermes. Chiavarone believes the Fed may need to raise rates at every meeting for the rest of the year. That would mean seven rate hikes.

Now that the central bank is being forced to play catch up, there are worries it may raise rates too sharply and spark a slowdown in economic growth or even a recession. There are also fears of stagflation, the crippling combination of slow growth and still rising inflation.

And if oil prices — which have surged since Russia's invasion of Ukraine —climb even higher, that would put the Fed in an even bigger bind.

"The biggest concern in the US about the direct impact of the war on our daily lives is inflation. There has been a spike in gas prices," said James Ragan, director of wealth management research at D.A. Davidson.

"Will consumers start to pull back?" Ragan said. "There are fears about the economy slowing even though we're not seeing evidence of that yet."