Stimulus deal unlikely until after the election 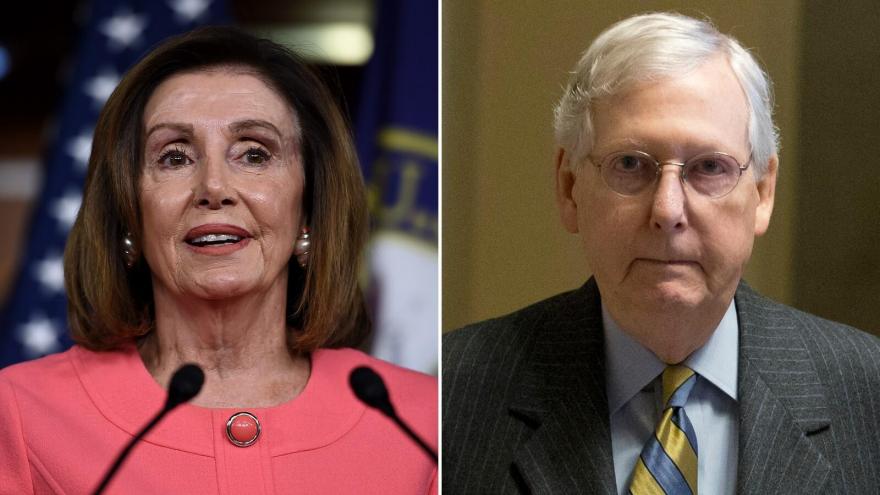 The leaders of the US House and Senate are unlikely to reach a compromise on a massive stimulus deal intended to help bolster small businesses and provide additional unemployment benefits.

(CNN) -- With fewer than two months until the election, the odds for a massive stimulus compromise intended to help bolster small businesses, provide additional unemployment benefits and give more money to schools as they adapt amid the coronavirus pandemic have fallen practically to zero.

"Well, looking to the House and for that matter our colleagues across the aisle -- it's a sort of a dead end street, and very unfortunate, but it is what it is," Sen. Pat Roberts, a Republican from Kansas, told reporters.

This week not a single Democrat voted for the Republicans' scaled-back stimulus plan and no leadership-level negotiations between Republicans and Democrats ensued. Instead, Congress is turning its focus now to simply passing a short-term spending bill by the end of the month aimed at keeping the government funded and then heading home for the election.

Asked if the stimulus negotiations were officially dead, Sen. Dick Shelby, a Republican from Alabama, told reporters, "It looks that way."

"You never know around here. Sometimes things look bleak and they're revived, and so forth. We thought the scaled-down version was a good bill, a good timing and everything else. The Democrats obviously thought otherwise. That's all we can do, is tee it up and go with it," Shelby said.

Senate Majority Leader Mitch McConnell put it this way: "I wish I could tell you we were going to get another package but it doesn't look that good right now."

While the September 30 government funding deadline could have become a catalyst for the stimulus, House Speaker Nancy Pelosi and Treasury Secretary Steve Mnuchin have already agreed that no stimulus package will be included as part of the "clean" short-term spending negotiations.

"Those negotiations are separate from this," Pelosi said during her weekly news conference on Thursday.

Behind the scenes, the California Democrat has encouraged her caucus to remain united even as pressure builds for members in tough reelection campaigns to go home with a deal.

"We don't want to go home without a bill, but don't be a cheap date. When you are in a negotiation, the last place to get weak knees is at the end," Pelosi told Democratic members on a private conference call Thursday.

For rank-and-file members, the lack of progress has settled into the new reality. Despite weeks of negotiations in July and early August, Democratic leaders and the White House never came to a consensus even on the scope and size of the package. Disagreements about how much funding to provide state and local governments, the amount of federal unemployment benefits and even additional funding for election assistance became key sticking points.

The result has become a blame game between Republicans and Democrats, who are reorienting toward election politics after just six months ago overwhelmingly passing the largest stimulus package in American history.

"The Republicans are underestimating the extent to which the CARES Act propped up the American economy," Democratic Sen. Brian Schatz of Hawaii told CNN last week. "There is nothing we can really do about it if they don't want to come to the table. But I do think they have been lulled into a false sense of security because of the decisive actions we took earlier. That amount of fiscal support is not going to be around in the fall."

Sen. Kevin Cramer, a Republican from North Dakota, argued that Democrats are avoiding a deal in an effort to win back the Senate and the White House.

"They benefit from not having a deal," Cramer said.

But the cost of inaction is still steep. Nearly 30 million Americans are receiving some kind of jobless benefit around the country, and many businesses whose initial Paycheck Protection Program loans allowed them to avoid layoffs have already run out of their first loans. Without another stimulus bill, those businesses won't be able to apply for another round of funds.

"I am worried about another round of layoffs as companies run out that money and, frankly, I think that is what some Democrats are counting on: bad economic news in October that helps them in November," said Senate Small Business Chairman Marco Rubio, a Florida Republican. "Now, I think rank-and-file members want to do something, but the congressional leadership is thinking about what helps them in November."

Still, some members say they haven't completely abandoned hope that something can still be done.

"I think there is still a chance," Sen. Roy Blunt, a Republican from Missouri, told CNN. "I won't be optimistic on this if we get through the next two weeks without finishing it up."