Stimulus checks could come quickly, but the jobless may have a wait for unemployment benefits 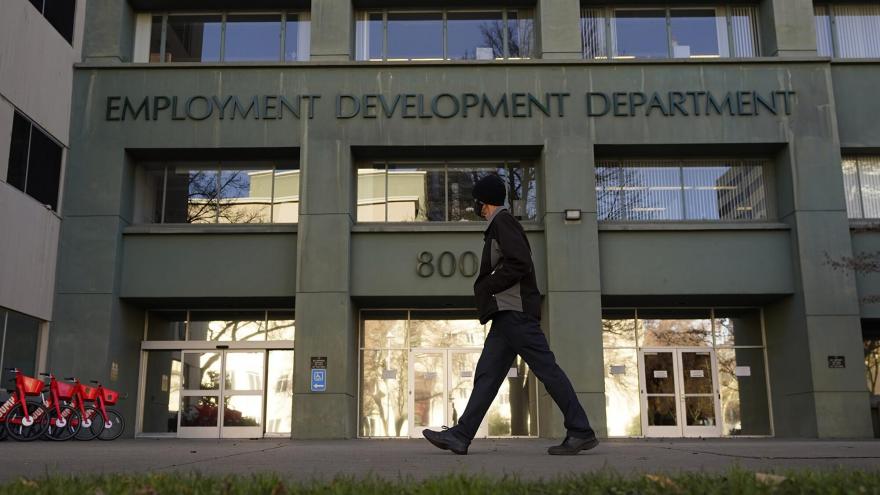 The $1.9 trillion Covid relief bill that President Joe Biden championed even before taking office is expected to land on his desk in coming days, but it could take some time for struggling Americans to see all the benefits.

(CNN) -- The $1.9 trillion Covid relief bill that President Joe Biden championed even before taking office is expected to land on his desk in coming days, but it could take some time for struggling Americans to see all the benefits.

While the $1,400 stimulus payments could hit people's bank accounts within days of Biden signing the bill, the extension of federal unemployment benefits as well as the enhanced child tax credit and more generous Affordable Care Act subsidies may take a few weeks -- or even a few months -- to arrive. The exact timing would depend on when federal departments can write the guidelines and how long it takes them and state agencies to then implement the new provisions.

The House is moving to approve the Senate version of the bill as soon as Wednesday. If Biden signs it quickly after that, the jobless may see little or no break in payments. But it depends on which state they live in.

The bill passed by the Senate last weekend would continue the existing $300 weekly federal boost and two key pandemic unemployment programs through September 6. The Pandemic Unemployment Assistance program provides benefits to freelancers, gig workers, independent contractors and certain people affected by the pandemic, while the Pandemic Emergency Unemployment Compensation program increases the duration of payments for those in the traditional state unemployment system.

Some states are moving fast

Some states say they expect to be able to continue sending out benefits without pause -- as long as they don't have to make many changes to their unemployment systems.

"If President Biden signs the bill soon and there are no additional program requirements in the bill, we should be able to implement the extensions without any interruption in payments," said Kersha Cartwright, a spokeswoman for Georgia's Department of Labor. "That is a lot of assumptions, though."

In Oregon, the Employment Department is already interpreting the legislation and preparing for the programming changes it will need to make to carry out the new provisions.

"Our goal is to minimize any delays or disruptions for Oregonians who are relying on these critical benefits," said Melanni Rosales, the agency's communications director.

Arizona's Department of Economic Security has also started planning for an extension, but the timing on when benefits would go out would depend on guidance from the US Department of Labor, said Tasya Peterson, the agency's press secretary.

Unlike the relief package Congress approved in December, this legislation should be signed before any laid-off workers run out of benefits, and there are far fewer changes than in the prior bill, said Andrew Stettner, senior fellow at The Century Foundation.

Most states should start sending out the jobless benefits in less than three weeks, he said.

When Congress passed the last relief bill extending the unemployment programs, some states were able to enact the new provisions swiftly, but others took more than a month. The delays left the unemployed waiting for $17.6 billion in benefits in January, according to an analysis by The Century Foundation.

Some jobless Oregonians, for instance, had no disruption in payments after the prior relief bill, but others had to wait until mid-February for their benefits to restart. In California, it took until early March to fully implement the December relief bill's provisions.

Stimulus checks will go out quickly

For the previous pandemic stimulus bill, the Internal Revenue Service started sending out the second round of payments -- that were worth up to $600 -- three days after then-President Donald Trump signed that bill in late December. But it's possible that tax filing season, which is currently underway, could slow down the process this time.

The payments do not go all out at once. Those whose bank information is on file with the IRS would likely get the money first because it would be directly deposited into their accounts. Others may receive paper checks or prepaid debit cards in the mail.

Still, millions of people could be at risk of missing out because the IRS does not know how to reach them. An estimated 8 million eligible people did not get the first stimulus payment, worth up to $1,200, which was approved last year and delivered over the spring and summer. While most people received the money automatically, very low-income people who don't normally file tax returns may have to take an extra step to register online or file a 2020 tax return.

This time, individuals earning less than $75,000 and couples earning less than $150,000 would receive the full $1,400 payment, plus an additional $1,400 per dependent. But the third round of checks would phase out faster than earlier payments -- completely cutting off individuals who earn more than $80,000 a year and married couples earning more than $160,000, regardless of how many children they have.

Families are not expected to see the boost in the child tax credit until the summer, at the earliest.

The credit would also become fully refundable for the year and may be paid out monthly, rather than as a lump sum at tax time.

Families could receive half their total credit as a periodic payment starting in July and running through the rest of the year, according to the legislation. They could then claim the remaining half on their 2021 tax returns.

But that schedule would also depend on whether the IRS could implement the changes that quickly, which might be a heavy lift considering its thin staffing and other responsibilities. The legislation gives the agency some leeway -- saying that the Treasury secretary could direct the payments to be issued as frequently as possible if a monthly timetable isn't feasible.

Americans who would qualify for the relief package's heftier federal premium subsidies for Affordable Care Act policies would need to wait until the new regulations are programmed into the Obamacare exchange.

The Department of Health and Human Services, which did not return a query about timing, is expected to move quickly to implement the law once it is signed, but it could still take several days or weeks.

Health insurers are waiting for critical details, including when the changes will "go live," said Kelley Schultz, executive director of the commercial product policy group at America's Health Insurance Plans, one of the industry's main trade associations.

"Once those back-end updates are complete, people should be able to shop for plans with new subsidies fairly quickly," she said.

The agency also must provide information about whether existing enrollees would need to return to the exchange to access the more generous assistance.

Under the legislation, enrollees would pay no more than 8.5% of their income towards coverage, down from nearly 10% now. Also, those earning more than the current cap of 400% of the federal poverty level -- about $51,000 for an individual and $104,800 for a family of four in 2021 -- would become eligible for help. The provision, which is retroactive to January, would last for two years.

Lower-income enrollees could have their premiums eliminated completely for the same period, and those collecting unemployment benefits could sign up for coverage with no premiums in 2021. The latter provision may take more time to set up since it is new.

The uninsured have until May 15 to enroll in 2021 coverage on the federal exchange, Healthcare.gov, and have extended sign-up periods in most states that run their own marketplaces. Biden directed the reopening of the federal exchange through an executive order in late January.

Also, the Senate legislation provides a full premium subsidy through the end of September to laid-off workers who want to remain on their employer health insurance plans through COBRA.

The provision should take effect April 1, but when folks would be able to access it would depend on federal guidance, as well as their former employers and administrators of the COBRA plans, Schultz said. The subsidy is set up to be a credit against employers' quarterly federal payroll taxes.

Food stamp recipients would continue to get a 15% increase in benefits, but the boost would last through September, instead of expiring at the end of June, under the legislation.

So they should not see any break in benefits.