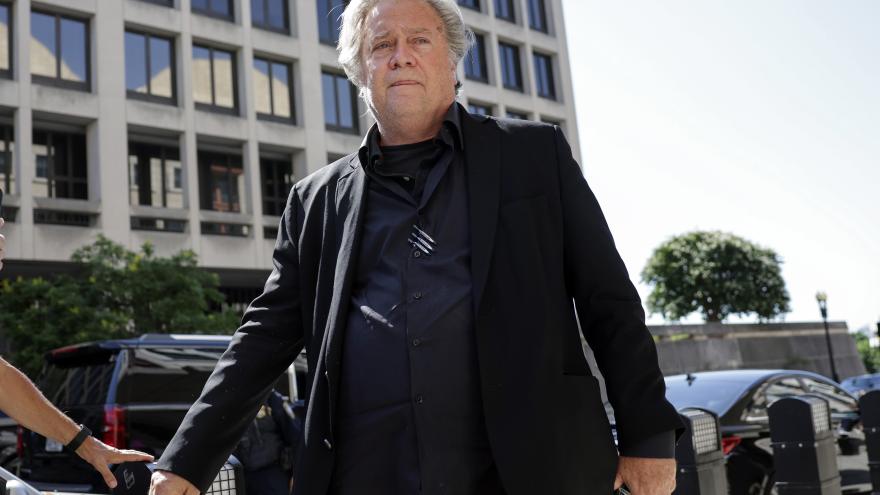 (CNN) -- Steve Bannon -- who defied a congressional subpoena and is set to go to trial on criminal contempt charges -- told the House select committee investigating the January 6, 2021, insurrection on Saturday that he is now willing to testify, ideally at a public hearing, according to a letter obtained by CNN.

Bannon's reversal comes after he received a letter from former President Donald Trump waiving executive privilege, although both the House select committee and federal prosecutors contend that privilege claim never gave Bannon carte blanche to ignore a congressional subpoena in the first place.

"When you first received the Subpoena to testify and provide documents, I invoked Executive Privilege. However, I watched how unfairly you and others have been treated, having to spend vast amounts of money on legal fees, and all of the trauma you must be going through for the love of your Country, and out of respect for the Office of the President," Trump wrote in a Saturday letter to Bannon, which was also obtained by CNN.

"Therefore, if you reach an agreement on a time and place for your testimony, I will waive Executive Privilege for you, which allows you to go in and testify truthfully and fairly" Trump added, as he went on to decry the committee of "Thugs and Hacks."

The letters were first reported by The Guardian.

Bannon was charged last year with two counts of criminal contempt of Congress. He has argued that he was free to ignore his congressional subpoena in order to protect Trump's potential privilege claims. But federal prosecutors and other legal experts have argued that privilege does not apply to Bannon -- who left his White House gig as chief strategist years before the Capitol riot -- and did not give him the authority to refuse to provide any documents or testimony to the committee.

Bannon's team provided Trump's new letter to the January 6 committee overnight, along with a letter from Bannon lawyer Bob Costello.

"While Mr. Bannon has been steadfast in his convictions, circumstances have now changed," Costello wrote. "Mr. Bannon is willing to, and indeed prefers, to testify at your public hearing."

Rep. Zoe Lofgren, a California Democrat who sits on the January 6 panel, told CNN's Jake Tapper on "State of the Union" on Sunday that the committee hasn't yet had a chance to discuss Bannon's letter, but that "I expect that we will be hearing from him and there are many questions that we have for him."

Lofgren, however, said that public testimony from Bannon was unlikely, noting that the committee typically does depositions. "This goes on for hour after hour after hour. We want to get all our questions answered, and you can't do that in a live format," she said.

The January 6 committee was interested in speaking to Bannon about his communications with Trump in December 2020, when Bannon reportedly urged him to focus on the January 6 certification of the presidential election results. Committee members were also interested in Bannon's comments in the run-up to the Capitol insurrection, including a podcast on January 5, in which he predicted, "All hell is going to break loose tomorrow."

Bannon, who has pleaded not guilty to his contempt charges, was set to go to trial July 18. Providing testimony would not necessarily absolve him of the criminal contempt charges he faces, so it's unclear how his upcoming trial would be affected if Bannon strikes a deal with the committee to testify. He is set to appear in court for a hearing in his case Monday.

A spokesperson for the committee did not immediately respond to a request for comment.