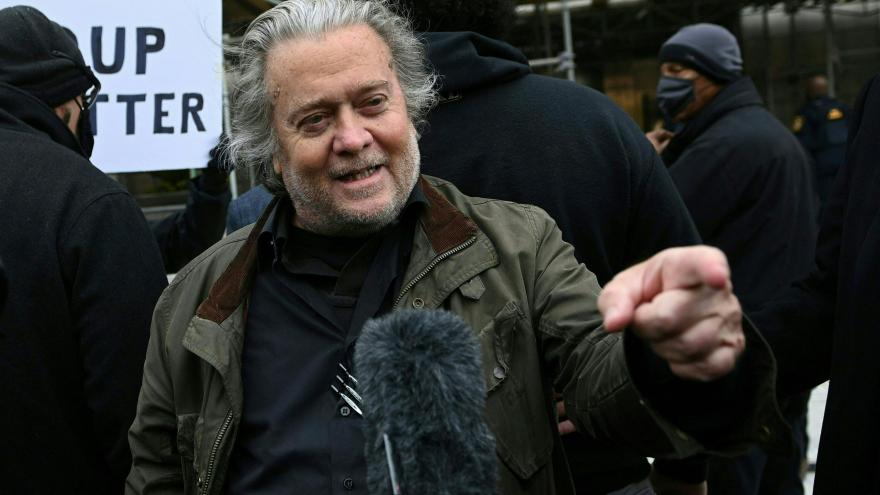 (CNN) -- Steve Bannon, the onetime adviser to former President Donald Trump who has been charged with contempt of Congress, asked a federal judge Friday to dismiss his criminal case.

Among the bevy of reasons Bannon provided for why his case should be dismissed: He said the congressional subpoena he received was invalid because of the makeup of the House select committee investigating the January 6, 2021, attack on the US Capitol and argued that he was "targeted to send a message."

Bannon also argued that his actions were necessary in order to protect the former President's ability to shield information under executive privilege claims and insisted he had relied on prior Justice Department guidance related to executive privilege in defying the congressional subpoena.

"Under the circumstances presented here, it would be fundamentally unfair and a clear due process violation to permit this prosecution to go forward," Bannon's attorneys wrote in a late Friday court filing. "It must be dismissed."

Bannon is scheduled to go to trial in July in the criminal contempt-of-Congress case the DOJ has brought against him for not complying with the House January 6 Committee's subpoena. He has pleaded not guilty.

Bannon's legal team has repeatedly pointed to indications that Trump was looking to assert executive privilege over certain records as an element of Bannon's defense.

"Mr. Bannon received actual authority in this case for his non-compliance with the subpoena directly from former President Trump's invocation of executive privilege and corresponding directive to Mr. Bannon, that Mr. Bannon must honor that invocation with respect to the subpoena," Bannon's attorneys wrote in the court filing.

Bannon's late Friday filing comes after he suffered a major setback in his case, which the Justice Department brought in November after he failed to comply with a subpoena issued by the January 6 panel.

US District Judge Carl Nichols ruled last week that Bannon could not use as a defense -- should his case go to trial -- evidence that he was following the advice of his attorney in opting not to cooperate with the House probe.

On Friday, the Justice Department sought to further limit the evidence Bannon can put up at trial in his defense, asking Bannon's judge to exclude three new categories of evidence.

The DOJ wants excluded its internal opinions and writings laying out the department's views on whether current or former federal officials can be prosecuted in subpoena disputes in which they raised executive privilege or immunity claims. Bannon obtained those records after securing a discovery order from the judge, though several of the documents were already public and cited in previous Bannon filings.

The Justice Department also argued that the internal department documents Bannon has cited so far address scenarios distinct from what Bannon was facing when he chose not to participate in the probe.

"The Defendant was not subpoenaed in relation to his time as an Executive Branch official and he was never directed by the Executive Branch or former President Donald Trump to engage in total noncompliance with the January 6th Select Committee's ('the Committee') subpoena as he chose to do," the filing said. "Given the evidence's irrelevance, the Court should exclude it."

Bannon served as a White House adviser at the beginning of the Trump administration but had been out of the federal government for years before the period the House committee is examining.

Shortly after the Justice Department submitted its request to exclude those records, Bannon pointed to the documents in a notice he filed with the court about his intentions to assert an "entrapment by estoppel" defense -- meaning an argument that the defendant had been misled by government statements to believe his conduct was legal.

In his motion to dismiss, Bannon argued that prior Justice Department guidance is relevant to his case and should offer grounds for dismissal.

"The legal authority that Mr. Bannon relied upon in this case reflects the formal, official, binding, authoritative position of the Department of Justice, the very agency that is prosecuting this case in direct contravention of its own formal, binding, published official policy," Bannon's attorneys wrote.

The Justice Department also asked the judge to keep out any evidence Bannon seeks to put forward that he had complied with previous subpoenas; according to the department's account of a presentation Bannon's lawyer gave to prosecutors before his client was charged, Bannon testified in four previous circumstances -- in the various Russia 2016 election interference probes -- about his communications with Trump.

"Just as the fact that a person did not rob a bank on one day is irrelevant to determining whether he robbed a bank on another, whether the Defendant complied with other subpoenas or requests for testimony -- even those involving communications with the former President -- is irrelevant to determining whether he unlawfully refused to comply with the Committee's subpoena here," the DOJ wrote Friday.

Finally, the government told the court that Bannon should not be able to argue at his trial that the January 6 Committee's subpoena of him was invalid because of supposed procedural defects plaguing the panel.

Any procedural objections Bannon would seek to raise about the committee's subpoena are coming too late, the Justice Department argued in its Friday request to limit that defense.

"It is settled law in the contempt of Congress context that a subpoenaed witness who fails to raise an apparent objection or privilege to a subpoena to the issuing committee has waived it as a defense to contempt," the government wrote in the court filing.

Bannon, meanwhile, filed a request with the court Friday seeking the exclusion of evidence the government obtained from subpoenas it had issued on his lawyer's phone and email records, as well as from presentations the lawyer gave prosecutors before Bannon was charged.

Bannon accused the government of "prosecutorial over-reaching" for seeking information about his lawyer and said the government misled the grand jury, both grounds for dismissal, Bannon's attorneys argued in the court filing.

The pre-trial disputes over evidence will shape the contours of each side's case.

Bannon is just one of four recalcitrant witnesses whom the January 6 Committee referred to the Justice Department for prosecution but the only one so far to face a criminal prosecution for his failure to comply with a committee subpoena. How his case unfolds will reverberate as other potential witnesses weigh whether or not to cooperate with the congressional investigation.

This story and headline have been updated.