Steelers and Browns meet in first game since brawl 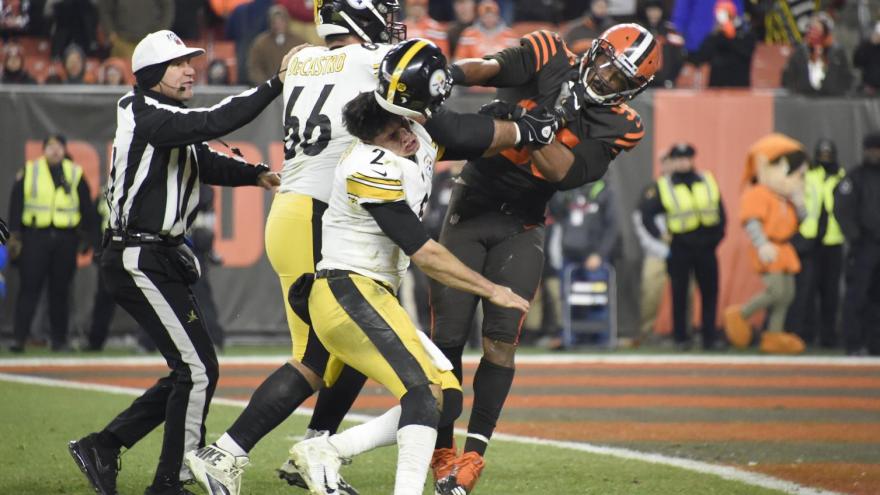 The last game between the Steelers and Browns featured a brawl that left 33 players fined and Browns defensive end Myles Garrett suspended for the season.

(CNN) -- The Pittsburgh Steelers and Cleveland Browns will face off for the first time since the helmet-swinging brawl that marred the end of their November 14 game, but without a couple of key participants.

For one, Steelers quarterback Mason Rudolph, who was involved in the brawl, was benched in favor of Devlin "Duck" Hodges in last week's win against the Cincinnati Bengals.

Hodges will get the starting nod against the Browns on Sunday, but Rudolph isn't letting losing the job get to him. "You handle it with a good attitude, a team-first attitude," he told reporters after a team practice. That's not to say Rudolph won't miss being on the field, as the Oklahoma State grad said: "Any player wants a chance to play every week ... I'll be ready whenever my number is called."

That's not the case for the other main character in the brawl that left 33 players fined. Browns defensive end Myles Garrett will not play the rest of the season after being suspended indefinitely. Garrett appealed the suspension, with his case heard by two appeals officers jointly appointed by the NFL and the NFL Players Association. However, despite Garrett's contention that a racial slur uttered by Rudolph was part of the reason for the brawl, his appeal was denied.

Garrett, with time away from the game, helped his Browns teammates serve food at a "Feed the Need" event in Cleveland on Tuesday. Garrett told reporters that he was 'just to give back to the community ... you know, they've had my back through my whole time in Cleveland, so just trying to show that I care and that we care"

Even with Garrett and Rudolph sidelined, the game is certain to feature some animosity. Steelers cornerback Minkah Fitzpatrick said during his media availability: "This is why we play, for these types of games that are going to be competitive, where the other team comes in with a chip on their shoulder."

Browns head coach Freddie Kitchens added fuel to the fire when he was spotted wearing a "Pittsburgh started it" T-shirt over the holidy weekend.

Most players downplayed any notion of added drama between the rivals. Cleveland star receiver Odell Beckham Jr. said during his media availability: "Every game is intense ... it's a rivalry already, so I think we know what's at stake. We could talk it up ... but in my eyes, it's just another football game."

Browns quarterback Baker Mayfield said, "This game is the biggest game of the season," before adding, "just like the next game always is."

Despite assertions from the players, the game will have a little extra bite just based on playoff implications. The Steelers, with a record of 6 wins and 5 losses, are clinging to the last playoff spot in their conference. The Browns, with a 5-6 record, could dramatically change the course of their season with a win over their division rivals.

The Browns play the Steelers in Pittsburgh at 1 p.m. ET Sunday on CBS.