Statues of Christopher Columbus are being dismounted across the country 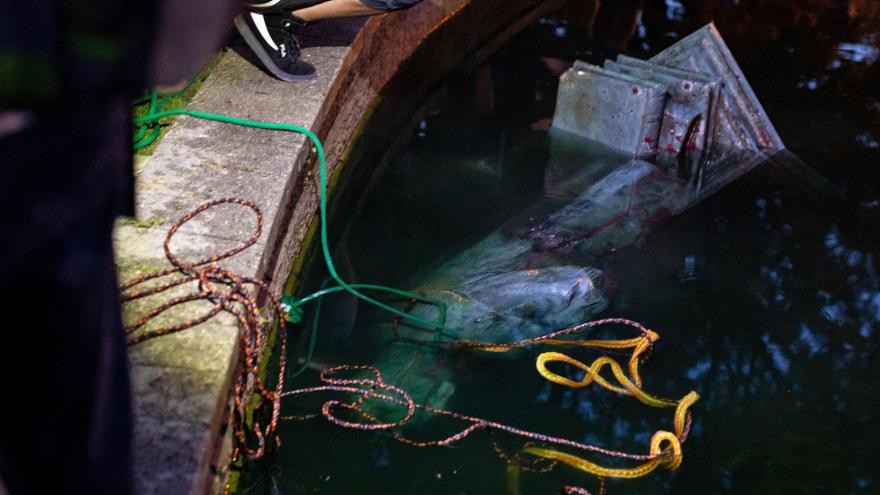 A statue of Christopher Columbus in Richmond, Virginia, was thrown into a lake.

(CNN) -- As racial reckoning occurs across the country following the death of George Floyd, many Confederate statues -- which some consider racist symbols of America's dark legacy of slavery -- have been removed.

Columbus has long been a contentious figure in history for his treatment of the Indigenous communities he encountered and for his role in the violent colonization at their expense.

In recent years, many cities and states have replaced Columbus Day with Indigenous Peoples' Day, in recognition of the pain and terror caused by Columbus and other European explorers.

Some demonstrators have said they targeted Columbus statues to stand in solidarity with Indigenous people.

'The time for being complacent is over'

At the Minnesota State Capitol on Wednesday, a group of people at a rally tossed a rope around a statue of Columbus and tugged it to the ground, CNN affiliate KMSP reported.

"This has been an ongoing conversation that we've been having for years with people who occupy this building (the capitol)," Mike Forcia with AIM of Twin Cities, a Native American advocacy group that organized the rally, told KMSP. "It's always 'you got to wait; there's a process you got to go through.''"

But, Forcia said, "the time for being complacent is over."

Elsewhere in the US, about 1,000 people gathered at Byrd Park in Richmond, Virginia on Tuesday, according to CNN affiliate WTVR.

The Richmond Indigenous Society said in a tweet ahead of the rally that "we are gathering at Byrd Park to protest yet another racist monument. Christopher Columbus was a murderer of Indigenous people, mainstreaming the genocidal culture against Indigenous people that we still see today. Bring your sage, drum, jingle dress, and mask!"

The demonstration began peacefully, but then protesters vandalized the Columbus statue, tore it down, and threw it into a lake in the park.

"I think it's phenomenal," longtime Richmond resident Maureen Stinger told WTVR. "I know some people have a lot of emotional attachment to some of these monuments, but I believe with them coming down, that is one very strong step toward more unity within the city. And I think that can only be a good thing."

The statue was removed from the lake on Wednesday.

Meanwhile, in Boston, officials removed the Columbus statue located in the city's North End after it was beheaded Tuesday evening.

The statue, which was erected in 1979, had been previously vandalized in 2015, when it was doused in red paint and the words "Black Lives Matter" were spray-painted on the back, CNN affiliate WBZ reported

"This particular statue has been subject to repeated vandalism here in Boston, and given the conversations that we're certainly having right now in our city of Boston and throughout the country, we're also going to take time to assess the historic meaning of this action," Mayor Marty Walsh said, according to WBZ.

The statue will be put into storage for now, Walsh said. It's unclear whether it will go back up.