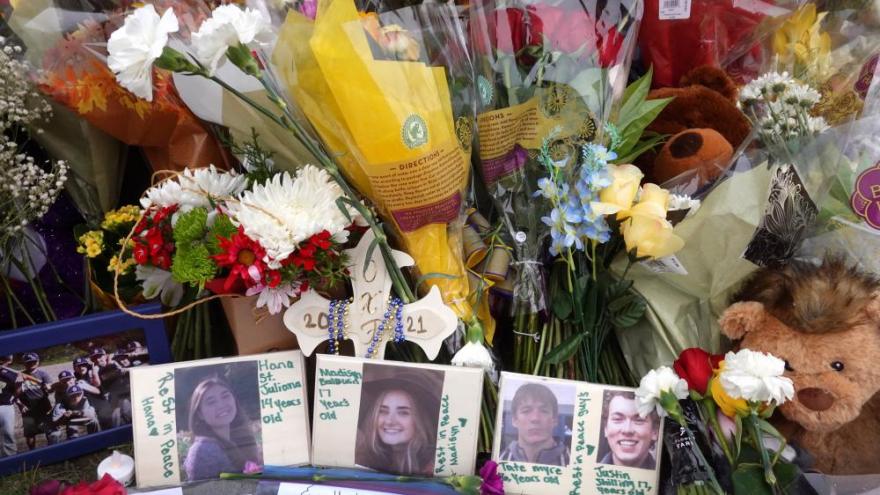 A memorial outside of Oxford High School on December 3, 2021, in Michigan, after four students were killed on November 30, when student Ethan Crumbley allegedly opened fire.

(CNN) -- A new study published Thursday by a leading non-profit organization that focuses on gun violence prevention found that there is a direct correlation in states with weaker gun laws and higher rates of gun deaths, including homicides, suicides and accidental killings.

"What this project does, is show what we've been saying for years: Gun laws save lives," said Nick Suplina, senior vice president of law and policy at Everytown for Gun Safety Support Fund. "We think this is going to be a really important tool for lawmakers, reporters and advocates that have been looking for the kind of visual tool that can make that case clearly."

To compile its list, the group used data from the Centers for Disease Control and Prevention, looked at each state's rate of gun deaths in 2020 and compared those rates with 50 policies that they say are scientifically proven to be effective in preventing gun violence, Suplina said.

The research team then weighed the list of gun safety policies based on their efficacy, ranked each state on its implementation of those policies and compared that score with the rates of gun deaths in each state, he said.

The CDC's data includes homicides, accidental killings and suicides committed by guns. According to the CDC, over 45,000 people in the United States were killed with a firearm in 2020 -- more than half died by suicide.

The analysis, first reported by CNN, put California at the top of the list for gun law strength -- a composite score of 84.5 out of 100, with a low rate of 8.5 gun deaths per 100,000 residents, and below the national average of 13.6. Hawaii has the lowest rate of gun deaths in the country with the second strongest gun law score. It also has the lowest rate of gun ownership, with firearms in 9% of households, the data shows.

As state legislatures begin to convene for their 2022 legislative sessions, lawmakers will consider a breadth of bills that either loosen or expand gun protections across various states.

"I have seen firsthand in California that the work we have done to strengthen gun laws has been both life-saving and effective," said Rep. Mike Thompson (D-CA), chair of the House Gun Violence Prevention Task Force. "Gun laws work, and we need them across the board to ensure that felons, domestic abusers, and those with mental health issues can't simply go to the next state over to circumvent the very laws meant to keep guns out of their hands."

CNN has reached out to the National Rifle Association (NRA) to comment on the research, but it declined to do so before seeing the data.

"Lawmakers in the states at the bottom can't pretend to be ignorant about the importance of gun laws after looking at this report," said Shannon Watts, the founder of Moms Demand Action, which has been fighting for gun safety measures since the 2012 Sandy Hook Elementary School shooting in Connecticut that killed 20 children and six educators.

Nearly eight years ago, her 13-year-old son, DeAndre "Dre" Knox, was shot in the back left side of his head at a birthday party in Indianapolis when shots were fired during a confrontation between two boys. DeAndre, now 21, survived after being on life support for several days, Dycus said, and he currently lives in a facility with non-verbal quadriplegic paralysis.

"As a mother, when I look at him, I see everything that was taken away," Dycus said. "My son was a dreamer. He was a scholar. He was on this road to being something great."

"But on the flip side, I see this little boy who has made such an impact, not just on our city but our country, as it pertains to what it looks like to survive," she said. "Dre has embodied that."

Everytown designated a list of five foundational laws that have proven to be the most effective in lowering gun violence rates. These include requirements for a background check and/or permits to purchase handguns; a permit to carry concealed guns in public; the secure storage of firearms; the rejection of 'Stand Your Ground' laws; and the enactment of 'extreme risk' laws that temporarily remove a person's access to firearms when there is evidence that they pose a serious risk to themselves or others, according to Everytown.

In Texas, the controversial "constitutional carry" legislation went into effect in September that allows most Texans who legally own a firearm to carry it openly in public without obtaining a permit or training.

Supporters of the bill have argued that by removing the licensing requirement they are removing an "artificial barrier" to residents' right to bear arms under the Constitution and ensuring more Texans have access to "the protection of themselves or their families" in public. But law enforcement officials and experts have expressed concerns that the open carrying of firearms makes it more difficult for police to quell violence.

"As we've seen gun extremism continue to rise in this country, we've also seen people who open carry start out at marches and rallies and then show up in elected officials' homes, in polling places, statehouses and then on January 6th at the US Capitol," Watts said.

According to Watts, the shooting in a Michigan high school in December that killed four students is a "textbook example" of why laws that require the secure storage of firearms are essential to gun safety.

The alleged gunman in that shooting, 15-year-old Ethan Crumbley, is accused of fatally shooting four classmates and wounding several others on November 30. His parents were charged with four counts of involuntary manslaughter in the same incident. All three have pleaded not guilty.

Prosecutors allege that James Crumbley, the father of the suspected shooter, bought the gun used in the shooting four days earlier. The incident prompted outrage over Ethan's alleged accessibility to the gun, arguing that the shooting could have been prevented.

Only 23 states currently have some semblance of a secure storage requirement, Watts said.

Last year, Everytown successfully worked to pass secure storage laws in Maine, Colorado, and Oregon, among others, according to Watts.

During this year's legislative session, Watts said the organization will work with lawmakers in hopes of passing such laws in at least 14 states. States such as California, Michigan and New Jersey are working on first-of-its kind legislation that requires parents to be notified about secure storage.

Everytown's research shows that 21 of the country's states have rejected Stand Your Ground laws, which allow individuals to use deadly force in public as self-defense even if they can safely walk away from the situation.

Despite strong gun laws, some states still feel the effects of being close to a state with more lax regulations. For example, Illinois has the sixth-strongest gun safety laws in the country, but its neighboring state of Indiana has much weaker gun laws, Suplina says.

According to Suplina, this could explain why such a high number of guns purchased in Indiana have ended up in Chicago. Last year, the U.S. Department of Justice charged six Indianapolis residents related to the straw purchasing of firearms. Prosecutors said more than 20 of the guns were recovered in Chicago after being used in violent crimes, including murder.

Gun violence overall has risen during the pandemic. More than two-thirds of the country's 40 most populous cities saw more homicides last year than in 2020, and most of them were a result of gun violence, according to a CNN analysis of police department data. For many cities, the elevated rates of homicide continued into 2021.

While experts say the reasons for the rise in homicides are varied, murders are increasingly carried out with guns. The increase in gun violence was underscored in the FBI's 2020 Uniform Crime Report, which stated that about 77% of reported murders in 2020 were committed with a gun, up from 74% in 2019. The agency reported that the number of homicides increased by nearly 30% from 2019, the largest single-year jump the agency has recorded. There is no federal database of gun sales, but other independent surveys have found that gun sales have soared during the Covid-19 pandemic.