States waiting for answers from feds on coronavirus vaccine distribution 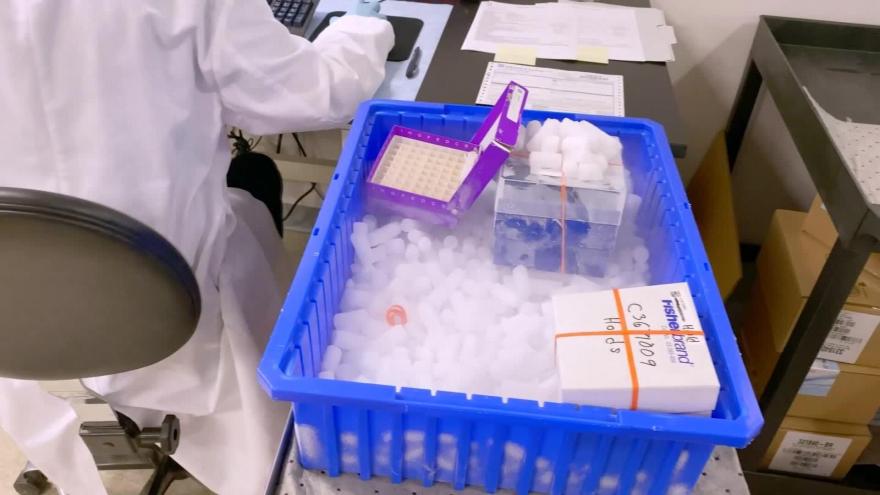 States are waiting for answers from the federal government on the coronavirus vaccine distribution.

(CNN) -- With the US on the cusp of a coronavirus vaccine, states are scrambling to nail down their distribution plans as they await key information -- like how many doses of the vaccine they'll receive.

Multiple federal agencies are involved in the process, and some state officials are concerned about a lack of transparency and clarity in the run-up to a vaccine's release at a time of such urgency.

RELATED: The pandemic has become a humanitarian disaster in the United States

Gen. Gustave Perna, who is helping to oversee Operation Warp Speed, told a top health official in Missouri he knew how many doses the state would get but wasn't willing to share the number yet. In California, officials say they're planning for "multiple scenarios." And in Minnesota, officials say they need more federal funds to carry out a vaccination program.

"We set all the tracks down for the train to roll on and we're just waiting for the train," a Washington state official told CNN.

The unease stems from a severe shortage in personal protective equipment earlier this year that resulted in states clamoring to obtain the necessary supplies to respond to the pandemic, diminishing confidence between states and the federal government.

This week, Pfizer announced that interim results from its clinical trials show that its Covid-19 vaccine is more than 90% effective and another pharmaceutical company, Moderna, said it expects to announce efficacy data by the end of the month. Vaccine chief Moncef Slaoui estimated Friday that there will be enough vaccine doses to immunize about 20 million Americans in December.

The vaccination program is being managed nationally by the US Centers for Disease Control and Prevention, the Department of Defense, and Operation Warp Speed, the federal government's effort to speed development of drugs, vaccines and other measures to fight the coronavirus pandemic.

The director of distribution for Operation Warp Speed told CNN Thursday that the federal government's vaccine distribution system is "ready to go."

"We are administering the influenza vaccine as we speak with no fanfare whatsoever. This will be no different. We want to make the distribution of this just as easy as a normal influenza vaccine," Paul Ostrowski said.

Operation Warp Speed, however, will not play a role in deciding how many doses of coronavirus vaccine will be sent to each state, Ostrowski told CNN, saying that allocations to states "is really a policy decision."

Policymakers will decide how much vaccine each state gets, Ostrowski said.

Once any vaccine gets emergency use authorization by the US Food and Drug Administration, the vaccine will be shipped to states, but it's not clear how much each state will receive, making it difficult for states to plan for distribution, Hannan said.

"The states are constantly asking, 'Am I getting 5 million doses or 250,000 or 10,000?' because that's the key to being able to plan -- they really need to know how much they are getting," Hannan told CNN, adding that some states have received "ballpark estimates," though they keep changing.

State immunization managers say they have heard conflicting information about the decision-making process behind distribution. "They might be on a call with Operation Warp Speed and they'll be told one thing and then on a call with a CDC person and be told something else," Hannan said.

Perna said Friday that vaccines will be allocated "pro rata by population so that we ensure fair and equitable across."

"We need the states, who are part of the planning, to accept the vaccine," Perna said during a news conference in the White House Rose Garden. "We are working closely, along with the CDC, the 64 jurisdictions and states, to ensure the vaccine can safely and quickly get to those who need it first. And then we have plans to ensure that it spreads exponentially across our country and that no place is left without a vaccine."

Kurt Seetoo, program manager of the Maryland Department of Health Center for Immunization, told CNN the CDC provided the state with estimates, but details on allocation remain unclear.

"We are just waiting to see how much vaccine we'll have available and make sure we get it to our hospitals and our local health departments to get to healthcare workers and those at highest risk for severe disease," Seetoo said, calling it a "waiting game."

Pfizer is expected to distribute its vaccine first, assuming initial data hold up and the vaccine is proven safe and effective to the FDA's satisfaction. That adds a level of complication, as Pfizer has said it will not work within the federal government's vaccine distribution system, which has a contract with medical and pharmaceutical supplies company McKesson, but will distribute its vaccine directly.

Health and Human Services Secretary Alex Azar said shipments from Pfizer will start "in increments of about 20 million doses, which begin in late November and continue monthly." But, when asked by CNN, Pfizer would not give a number, instead only saying that 50 million doses would be available worldwide to countries that have agreements with Pfizer.

What states do once they get the vaccines

Paul Mango, deputy chief of staff for policy at the Department of Health and Human Services, said that the federal government is going to allocate vaccines based on calculations on the back end that take into account how many people are considered a priority in a state, like residents in nursing homes or frontline health workers.

But the government will not decide where vaccines ultimately wind up. That's where states come in.

Over recent weeks, states have sent interim plans to the CDC, which falls under HHS, detailing their critical populations and approach to distributing the vaccine once received. CNN reached out to 50 states and received responses from 19.

Missouri Director of Health and Senior Services Randall Williams told CNN that he had a one-on-one conversation with Perna last week about how much of the coronavirus vaccine the state of Missouri is going to receive and what to expect in the days and weeks ahead.

Williams said that Perna, who he described as "very forthright," knew how much of the vaccine Missouri was going to get, but would not share it.

The vaccine in Missouri will be distributed in phases. The first phase of the vaccine will be given to "paid and unpaid people serving in healthcare settings who have the potential for direct or indirect exposure to patients or infectious materials and cannot work from home," according to the state's plan. The state's plan on vaccine distribution predicts that 425,000 people are healthcare workers that need to be vaccinated in the first wave.

If everything goes smoothly, Williams predicted vaccines can start to be given to people in Missouri "at mid to the third week of December." Williams shared that most of his conversations about the vaccine have been through HHS, the CDC and the Association of State and Territorial Health Officials, not the White House, adding that Perna gave him his cell phone in order to keep in touch.

Like Missouri, states are outlining their priorities, acknowledging that there will be a limited supply and a need to get the vaccine to those who need it most urgently.

While they wait for information on issues concerning storage and handling requirements, the department said it's "actively planning for multiple scenarios."

Minnesota Department of Health spokesperson Doug Schultz told CNN that on top of not knowing when the state will be receiving the vaccine or how much it will receive, the state needs more federal assistance to be able to receive and distribute the coronavirus vaccine properly.

"Regarding resource needs, we are short on the public health staffing needed to plan and implement the response. We also need additional funds to promote the vaccine, to address IT needs, and to purchase additional items potentially needed to maintain and monitor vaccine cold chain once it is shipped to the state" Schultz told CNN.

Dr. Helene Gayle, who served as a co-chair for a committee focused on the equitable distribution of a coronavirus vaccine for the National Academies of Sciences, Engineering and Medicine, said they concluded the most straightforward way to distribute a vaccine was by population size.

"What we recommended, essentially, was that states get allocated an amount based on population," Gayle said. "We kind of ran numbers and realized that even if you tried to do it by Covid prevalence and all the rest, it doesn't matter enough to go through that complexity and it probably was simpler, more straight-forward and less subject to manipulation."

While the committee offered its recommendation to federal agencies, Gayle was not surprised to hear that confusion persists among the states.

"There's been confusion because there hasn't been the same level of national framework and guidance that has normally been the case," in past public health crises, she said. "Our recommendations were really based on best evidence -- and clearly with the hope that there would be no political interference."

Pfizer's emergence as the vaccine front-runner has added another layer of complexity for state planners. Pfizer's vaccine must be stored at about minus 75 degrees Celsius or minus 103 degrees Fahrenheit -- far colder than the requirements for most widely used vaccines.

Doctors' offices and pharmacies do not have freezers that go nearly that low. A review by CNN of the vaccine plans by states and territories shows only a few states have detailed plans for maintaining the vaccine's ultra-low temperature storage.

The challenges surrounding the cold storage could also limit the localities that have access to the first potential coronavirus vaccine.

"We're going to push those vaccines to places where we know that they can either have storage or we will refill them with dry ice as necessary throughout the process of administration," Ostrowski said. "We're not going to send the Pfizer vaccine to a place that's rural for instance, or whatever the case may be, where they can't administer it."

To assist states, Ostrowski said strike teams from the CDC are being deployed to make sure states' readiness for the vaccines is "being kept up," adding that the states have been provided access to use major chain pharmacies like Walgreens, Costco, and CVS, "which are very very good at administering vaccines," he said.