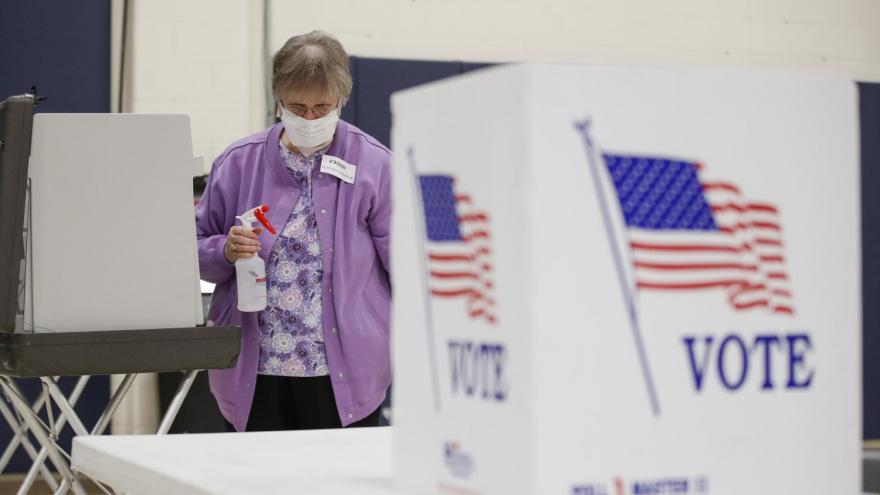 An election observer cleans voting booths during a Democratic presidential primary election at the Kenosha Bible Church gym in Kenosha, Wisconsin, on April 7, 2020. - Americans in Wisconsin began casting ballots Tuesday in a controversial presidential primary held despite a state-wide stay-at-home order and concern that the election could expose thousands of voters and poll workers to the coronavirus. Democratic officials had sought to postpone the election but were overruled by the top state court, and the US Supreme Court stepped in to bar an extension of voting by mail that would have allowed more people to cast ballots without going to polling stations. Both courts have conservative majorities. (Photo by KAMIL KRZACZYNSKI / AFP) (Photo by KAMIL KRZACZYNSKI/AFP via Getty Images)

(CNN) -- States are facing a shortage of thousands of poll workers as older volunteers at higher risk for coronavirus complications cancel plans to work on Election Day.

The numbers are staggering. Maryland announced in late July that it was short nearly 14,000 Election Day workers -- prompting Republican Gov. Larry Hogan to consolidate precincts into voting centers, in part to reduce the number of people needed.

Shortfalls, though, remain a concern for many state election officials, even as record numbers of people are expected to vote by mail in the November elections amid the pandemic.

The spring primaries that were held in person illustrated the risks of understaffing polling places in an election that's expected to draw high turnout, with voters in Wisconsin, Georgia and other states waiting hours to cast their ballots.

The US Election Assistance Commission has announced that September 1 will be National Poll Worker Recruitment Day, but states and voter groups aren't waiting to get going, tapping public workers, teens and even the National Guard to ensure they have sufficient staffing.

"You saw in the primaries -- you have to have poll workers to open polling places," said commission Chairman Ben Hovland. "Jurisdictions have to have those numbers."

Wisconsin Gov. Tony Evers activated the Wisconsin National Guard to assist as poll workers for Tuesday's primary. The Guard sent 700 soldiers and airmen to polling places in 40 counties, according to the state's Department of Military Affairs.

It was the third time Evers has had to use the Guard to address volunteer shortfalls amid the pandemic. The Democratic governor also activated them for the state's April primary and a special congressional election in May.

"Time and time again the Guard has stepped up to help their neighbors, friends, and communities, as they will be doing on election day by helping to ensure that every Wisconsinite can vote safely without fear for their health," Evers said in a press release.

New Jersey used its National Guard to help support polling locations for the state's July primary. This was the first time in the history of the New Jersey National Guard that more than 120 soldiers reported in civilian clothes to county election boards and polling sites in seven counties to help in the primary, according to the US Department of Defense.

In Ohio, the Cuyahoga County Council on Tuesday approved a resolution that will allow county employees to receive paid leave while serving as poll workers in the November election. Under the resolution, county employees would get their usual pay on Election Day as well as the compensation normally paid to poll workers.

Tony Perlatti, director of the Cuyahoga County Board of Elections, told CNN on Tuesday that the officials still need about 1,500 poll workers.

"We have a new infrastructure for collecting applications, which we went live with on Friday. So now we kind of have everything in place," said Perlatti.

Alaska has already seen results from a similar incentive for state employees for its primary next Tuesday. Division of Elections director Gail Fenumiai told CNN that more than 300 workers have applied since the recruitment effort was launched, enough to fully staff polling places.

"At this point in time it appears we are covered for the primary election. Once we get through the primary, we will be working on reconfirming workers for the November election," Fenumiai said in an emailed statement to CNN.

Tennessee is looking to teenagers to serve as poll workers this year.

In March, the Tennessee General Assembly passed legislation that lowered the age requirement to serve as a poll worker in the state from 17 to 16. Following the change, Secretary of State Tre Hargett announced that 3,000 Tennesseans, many of whom were young adults, had signed up to work the state and federal election on August 6.

"State and county election officials were aggressive in recruiting poll officials for August, and we will continue to do so for the roughly 17,000 workers needed in November," said Julia Bruck, director of communications for Hargett.

Reaching out to local religious groups and athletic teams for help

In Georgia, election officials are reaching out to local groups that include religious organizations and even athletic teams to help shore up staffing.

Deputy Secretary of State Jordan Fuchs told CNN that the recruitment efforts, which include promoting the US Election Assistance Commission's national recruitment day, hope to bring in at least 10,000 poll workers. As of Tuesday, Fuchs said about 3,000 Georgians have applied.

Kentucky and California are ramping up online recruitment, with a new volunteer portal that funnels applicants to county clerks.

Kentucky Secretary of State Michael Adams said in a news release Tuesday that the availability of workers will dictate how many polling locations are open on Election Day. If a county doesn't have enough poll workers, that limits the county clerk's ability to offer in-person voting, he said.

"Whatever your politics, we need your help so we can offer in-person voting, and also so we can ask less of our elderly poll workers who usually volunteer," Adams said in the release.

California Secretary of State Alex Padilla called on residents to volunteer in an announcement on Wednesday.

"County elections officials depend on reliable, dedicated teams of poll workers to make every Election Day run smoothly. This year, many Californians that would normally volunteer are being asked to stay home for their safety, so we need the next generation of poll workers to step-up and meet this moment," said Padilla.

Recruiting poll workers from out of town

In July, Vermont Secretary of State Jim Condos issued a directive that changed procedures for the state's August primary and November general election.

Among the changes was giving local boards the ability to appoint poll workers who are not local residents or registered voters, including 16- and 17-year-olds.

"[W]e have no way of knowing what the coming months will bring. However, we do know if there is a resurgence a few months from now, as we are already seeing, it will be too late to act to avoid compromising Vermonters' health and the exercise of their sacred franchise," said Condos in the July directive, which applied to Tuesday's statewide primary and November election.