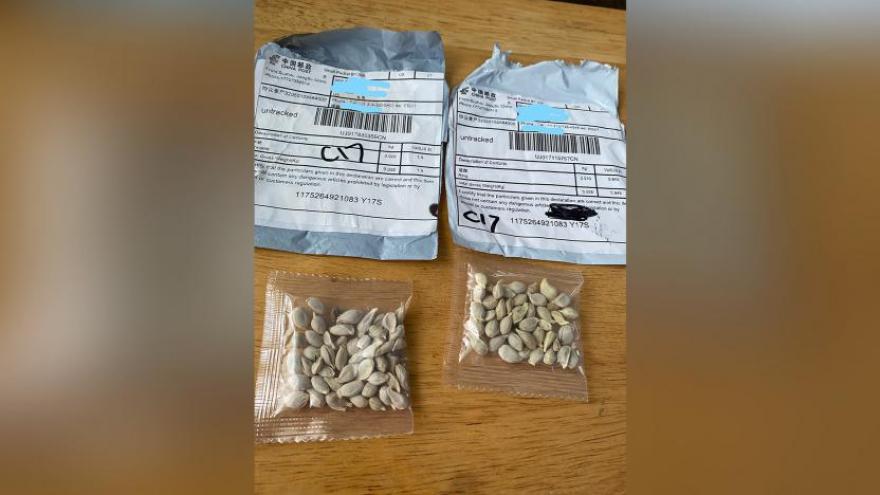 States are warning people not to plant the seeds they may have received in unsolicited packages. The packages appear to have originated in China, though it's unclear who exactly is behind them.

(CNN) -- If you've received a mysterious package of seeds in the mail lately, don't plant them.

Several states are issuing warnings after residents across the nation have reported receiving unsolicited packages that appear to have originated in China. The packages typically have Chinese characters on the label and contain a sealed packet of unknown seeds that some state agriculture departments say could be invasive plant species.

"Invasive species wreak havoc on the environment, displace or destroy native plants and insects and severely damage crops," the Virginia Department of Agriculture and Consumer Services said in a news release on July 24.

"Taking steps to prevent their introduction is the most effective method of reducing both the risk of invasive species infestations and the cost to control and mitigate those infestations."

It's unclear who exactly is sending these packages, why they're being distributed and whether the seeds are actually harmful. The department asked that anyone who has received this type of package in the mail contact the Office of Plant Industry Services.

Agriculture departments in Kansas, Kentucky, Ohio, South Carolina and Washington state are among state agencies that have issued similar warnings. Departments also cautioned people not to open the sealed packages of seeds and to keep the labeling intact so that officials could investigate.

Utah resident Lori Culley is one of the people who received a package of seeds, according to CNN affiiliate KSTU. She told the news station that though "most of the writing on the outside was in Chinese," the package label indicated that it contained jewelry.

Jane Rupp, president of the Better Business Bureau's Utah chapter, told KSTU that she suspected the packages could be a scam called "brushing," in which third-party sellers send recipients items they didn't order so that they can write a positive review on their behalf while posing as a verified buyer.

"That is rather random. I don't think I've heard of seeds before," Rupp told KSTU. "The first thing to do is Google your address and see what's out there ... Numerous things will come up when you Google your address. It's kind of scary sometimes."

Plants and seeds that are shipped to the US from other countries are heavily regulated by the Plant Protection and Quarantine Program, which is managed by the US Department of Agriculture's Animal and Plant Health Inspection Service.

Seeds that are imported into the US must be accompanied by a phytosanitary certificate that ensures the product is free of pests and diseases.