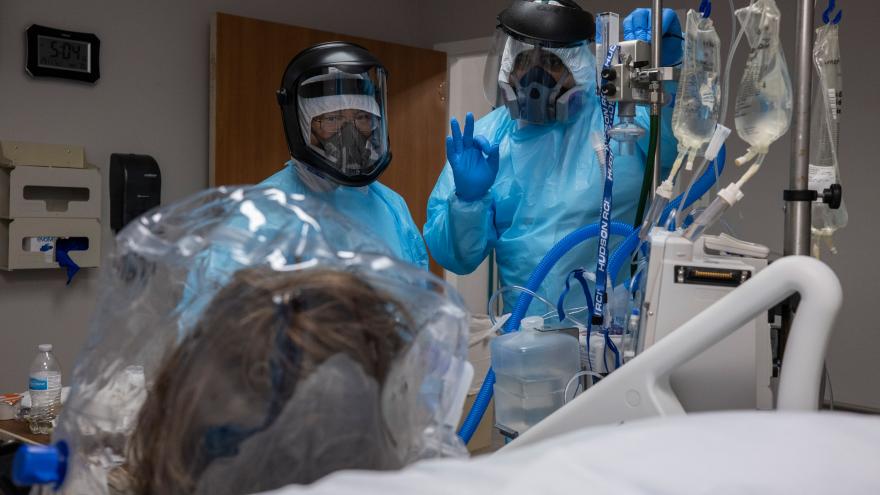 (CNN) -- The Covid-19 vaccines are getting closer and closer to the American public as the virus continues to infect people and send them to the hospital.

Claire Hannan, executive director of the Association of Immunization Managers, said Tuesday that states have not been given a date to expect shipments of coronavirus vaccines, but they're preparing to receive them as early as December 11.

"The CDC is telling us, 'You need to be ready,'" Hannan said.

To prepare, states are testing their vaccine data systems -- submitting files that are then received by a US Centers for Disease Control and Prevention clearinghouse.

As Americans wait for the vaccine, Covid-19 has been spreading quickly. The month of November set records 20 times for the number of coronavirus hospitalizations, the most recent Monday with 96,039, according to the Covid Tracking Project. Johns Hopkins University data reports the United States has reached more than 13.6 million total cases and 269,667 deaths. And the impacts of Thanksgiving get-togethers still won't be felt for weeks, health experts say.

Upcoming holiday gatherings around Christmas and Hanukkah could further spread infections to loved ones.

As officials concern themselves with rising case numbers, they are preparing for the first wave of vaccine distributions.

Vaccine candidates from Pfizer and Moderna are awaiting emergency use authorizations (EUA). States have until Friday to request the number of doses for Pfizer's vaccine, Claire Hannan, the executive director of the Association of Immunization Managers, told CNN on Monday.

Stephen Hoge, the president of Moderna, told NBC that they are "quite optimistic" when it comes to authorization of their Covid-19 vaccine candidate.

Once the US Food and Drug Administration grants EUAs, they will be ready to be shipped out, Dr. Moncef Slaoui, Operation Warp Speed chief scientific adviser, said Monday. And that very day or the next, the first immunizations can be administered, he said.

Two Covid-19 vaccines are expected to be ready soon, and already one thing is clear: There won't be enough vaccines to go around.

Although federal officials expect to have 40 million doses of coronavirus vaccine available by the end of December, those doses will not all be available at once, CDC vaccine advisers were told Tuesday. CDC's Dr. Sara Oliver told the Advisory Committee on Immunization Practices that the CDC expects between 5 million and 10 million doses to become available each week for the first few months as vaccine makers ramp up manufacturing.

The decision on who gets the vaccines first was made by the committee, a panel of independent advisers to the CDC. They decided Tuesday afternoon to put both health care workers and residents of long-term care facilities at the front of the line.

Vaccinations are expected to begin in mid- to late December, depending on other approvals.

Each state will decide who within those groups will get the vaccine first.

But even after vaccines start to be distributed in December, there won't be enough for the wider public to be immunized until April or May of 2021, Dr. Anthony Fauci, the nation's top infectious disease doctor, said. Until then, the US is still contending with an unprecedented spike.

Florida became the third state to surpass 1 million cumulative Covid-19 cases on Tuesday, following behind Texas and California, according to the Florida State Department of Health.

In Minnesota, more than a third of counties are 10 times over what would be considered a high-risk threshold for infection rate growth as the state is in "the worst spot we've been in since March," Minnesota Department of Health Commissioner Jan Malcolm said Monday.

"When there's this great increase in the number of Minnesotans needing hospitalization for Covid, that can have some really serious implications for the availability of hospital care for other critical issues as well," Malcolm said. "And the number of people being admitted for Covid is far overshadowing what we saw back in May."

At least 35 hospitals in Minnesota are reporting over 95% of their staffed ICU beds are in use, according to the state's dashboard.

To manage the risk of reopening, New Mexico Gov. Michelle Lujan Grisham announced a new "Red to Green" system that tiers counties by their risk of spread. The data will be updated biweekly, and if a county fails to meet the metrics, it will begin operating at the most restrictive level within 48 hours.

Nationally, Tuesday marked the 29th consecutive day that the United States reported more than 100,000 new cases -- a number that far exceeds the records set in the spring and summer surges, which both stayed below 60,000.

As cases increase over the holiday season, so have hospitalizations -- putting health care systems under stress.

California Gov. Gavin Newsom on Monday told reporters that the intensive care unit bed capacity in the state might reach 112% by Christmas Eve, if the trend of surging coronavirus cases continues.

In Rhode Island, officials have prepared to use field hospitals after telling residents their systems were already at capacity.

In New York, where some hospitals saw room capacity taxed in March, Gov. Andrew Cuomo said this time medical systems need to take steps to move patients to other facilities that have space.

Health care systems might be even more strained this time around because researchers are now seeing people affected by the virus even after they no longer show symptoms, Fauci said.

"The idea that you get infected, you either get no symptoms or you die, and if you don't die, you're OK -- I think that's really a misperception," he added.

New York City Health Commissioner Dr. Dave Chokshi issued a notice that warns at-risk older adults and those with underlying health issues to stay in their homes as much as possible.

Under the health advisory, the commissioner is calling on those people to limit outdoor activities and stop non-essential travel. It also asks anyone who is around those populations to wear a face covering.