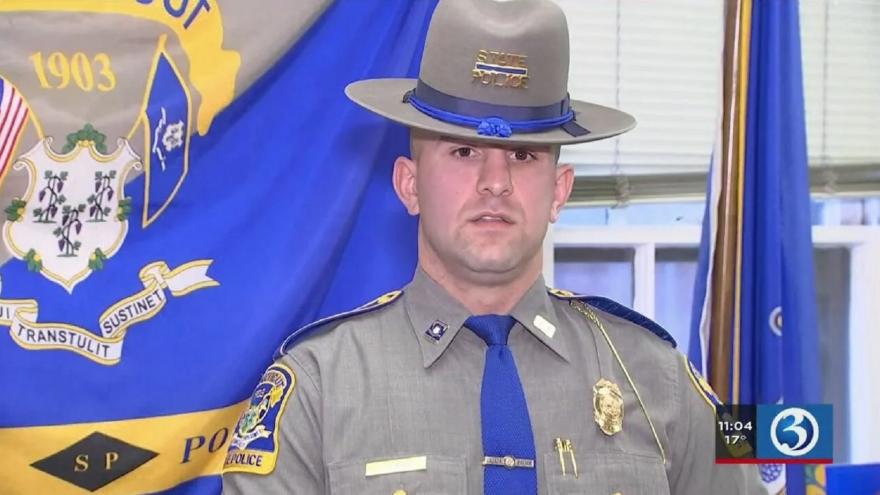 WINDSOR, Connecticut (WFSB) -- A state trooper is being hailed as a hero after jumping into action a saving a man’s life on Friday.

It’s a story of courage. It’s about a state trooper that has been on the job for just a few months, and on Friday he not only helped a man get his pulse back, but he also personally made sure he made it to the hospital.

Connecticut State Police (CSP) Trooper Matthew Cerri said, “I honestly don’t consider myself a hero… any of my fellow troopers would have done the same thing.”

Connecticut State Police Troop H received a 911 call from the passenger of a limousine traveling on I-91 in Windsor. The passenger reported that the driver was in the middle of a medical event and was unresponsive and unconscious.

State Troopers were dispatched to the scene and quickly determined the driver had no pulse and was not breathing.

According to Connecticut State Police (CSP), the officer removed the driver from the limousine and immediately started performing life-saving treatment. The officer used CPR as well as a bag valve mask to assist with breathing.

According to CSP, a pulse was detected once the driver was in the ambulance but still needed assistance breathing.

According to Cerri, the individual was in such critical condition both paramedics were needed to treat him.

This left no one available to drive the ambulance to the hospital.

“I stepped up and said I will drive the ambulance, so I hopped in the driver’s seat and drove them to the hospital… Lights and sirens,” said Cerri.

He raced to the hospital in the pouring rain.

The unconscious driver was soon admitted to Hartford Hospital and remains in the ICU.

Cerri says it was an honor to save a life, “its surreal but humbling at the same time now being at the point I never thought I would be even a year ago.”

The state trooper shares he just graduated from the academy in August of 2021.

This moment is why he never gave up.

“To anyone that is aspiring to be a trooper, this was my third go around trying to apply to be a Connecticut State Trooper don’t give up chase your dreams… This was my dream to be in these shoes right now,” said Cerri.

Although Trooper Cerri doesn’t not consider himself a hero, the state police is recommending him and the other responding troopers for the agency’s lifesaving medal.