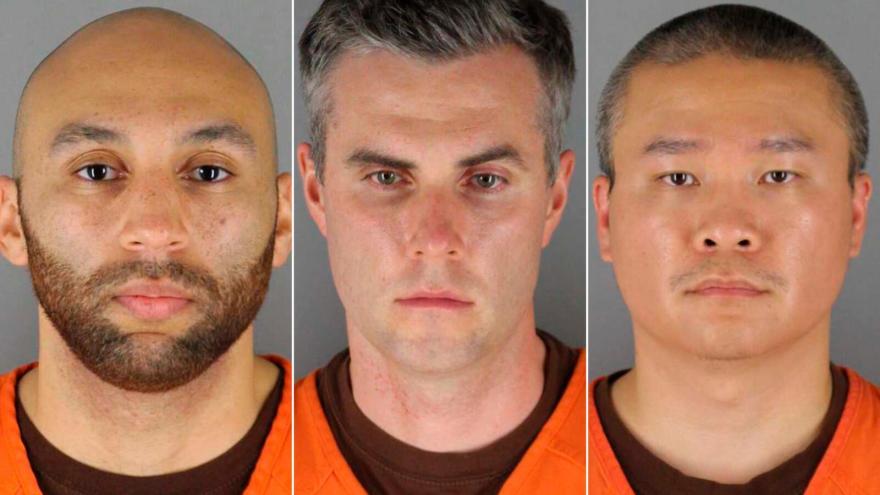 The state trial for the three former Minneapolis Police officers accused of aiding and abetting the murder of George Floyd has been postponed until March 7, 2022, so that a federal trial on civil rights charges can take place first, Hennepin County Judge Peter Cahill announced in a May 13 hearing, according to a pool reporter in court.

(CNN) -- The state trial for the three former Minneapolis Police officers accused of aiding and abetting the murder of George Floyd has been postponed until March 7, 2022, so that a federal trial on civil rights charges can take place first, Hennepin County Judge Peter Cahill announced in a Thursday hearing, according to a pool reporter in court.

Derek Chauvin, the former officer who kneeled on Floyd's neck and back for more than nine minutes, was convicted last month of two counts of murder and one count of manslaughter. His sentencing is set for June 25.

During the fatal restraint, Kueng held down Floyd's torso, Lane held down his legs and Thao restricted bystanders from intervening, videos and testimony from that day show.

All four former officers had initially been set to stand trial on the state charges together. But Cahill ruled in January that Chauvin's trial would be held separately, citing limits on courtroom attendance due to Covid-19 precautions, and the judge moved the other officers' trial to August.

The federal charges will now delay the state trial even further. Last week, a federal grand jury indicted all four former officers in connection with Floyd's death, alleging they violated his constitutional rights, according to court documents filed in federal court in Minnesota.

The indictment specifically charges Chauvin with depriving Floyd's right to be free from unreasonable seizure, charges Thao and Kueng with failing to intervene, and charges all four with failing to render medical aid.

Thao, Kueng and Lane appeared in federal court last Friday via video conference, and all three were released on $25,000 bond.

Separately, Judge Cahill ruled Wednesday that the murder of Floyd had four aggravating factors, which paves the way for the judge to sentence Chauvin to longer than the recommended 12 and a half years.

In particular, the judge ruled that Chauvin committed the crime as a group with the active participation of at least three other people. Cahill wrote that Thao, Lane and Kueng were actively involved in the incident, but he made no finding as to their intent or knowledge.

Their roles in Floyd's death

During the restraint, Lane is heard asking, "Should we roll him on his side?" and Chauvin responded, "No, staying put where we got him," according to body camera videos. Minutes later, Lane again said, "Want to roll him on his side?" the videos show. Kueng checked for Floyd's pulse but could not find one. The officers at no point moved Floyd into a side recovery position to help with his breathing.

Lane also joined the police department as a cadet in February 2019. He didn't have a history of complaints. He had been on the police force for four days when Floyd died, his attorney Earl Gray said last year. Lane was "doing everything he thought he was supposed to do as a four-day police officer," Gray said.