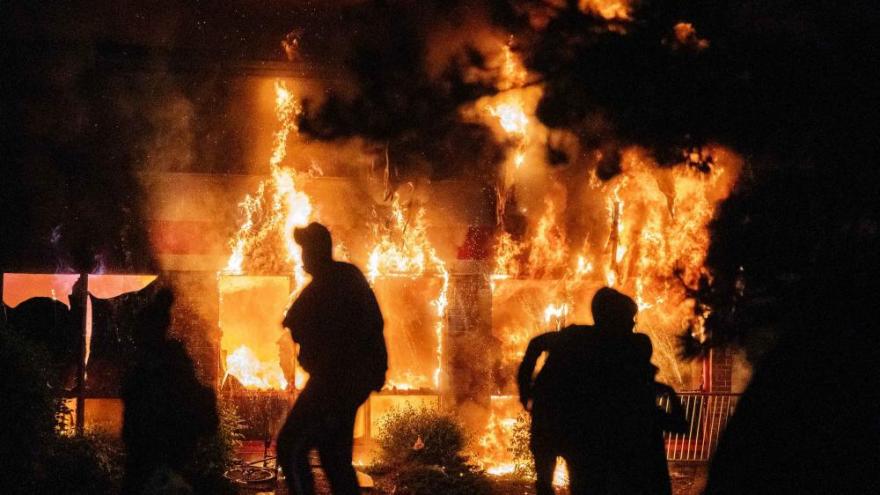 Buildings burn as protesters gather outside the 3rd Precinct.

(CNN) -- Pain and anger over the death of George Floyd spilled over into multiple cities across the country hours after the former Minneapolis officer seen in video with his knee on Floyd's neck was arrested and charged with murder.

Demonstrators funneled their anguish in cities like Atlanta, New York and Washington into chants, signs and outbreaks of violence, smashing windows and setting vehicles ablaze.

In Minneapolis, roughly 1,000 people marched peacefully along the city's major freeway Interstate 35, hours after a curfew went into effect. One black man held a sign that read, "Am I next?"

Eventually the marchers made it to the 5th Precinct where some demonstrators threw rocks or bottles at police.

• In one of the most chaotic protests Atlanta has seen in years, demonstrators smashed windows of police cars outside CNN Center, which houses Precinct 5 of the Atlanta Police Department. At least one squad car was set on fire. Police in riot gear helped other force protesters back to Centennial Olympic Park.

• Minneapolis and St. Paul are under a curfew but few people paid attention. Around midnight, the state's Department of Public Safety tweeted that 350 troopers are near the 5th precinct in Minneapolis to clear the area and enforce curfew.

• In Washington, DC, a protest outside the White House briefly caused the building to be placed on lockdown. It has since been lifted and the Secret Service has reopened entrances and exits to the White House campus for both staff and media.

• In New York, protesters and police clashed in various incidents Friday night outside the Barclays Center with protestors throwing water bottles, what appeared to be a bottle of paint and more at police officers. At least 12 people were arrested, police said.

• Detroit Police have arrested nine people, one of whom tried to run over an officer with a car, Chief James Craig said.

Floyd's family is angry about the charges

On Friday, Hennepin County Attorney Michael Freeman charged Chauvin, the fired police officer seen in a video with his knee on Floyd's neck, with third-degree murder and second-degree manslaughter. His bail has been set at $500,000.

Floyd's family and their attorney, Benjamin Crump, are upset that Chauvin wasn't charged with a more serious offense.

Chauvin had his knee on Floyd's neck for 8 minutes, 46 seconds in total, and 2 minutes, 53 seconds after Floyd was unresponsive, according to a criminal complaint filed Friday.

Chauvin and three other officers detained Floyd in handcuffs Monday after he allegedly used a counterfeit bill at a convenience store, police have said. Outrage grew in the form of protests after a video surfaced showing a Minneapolis police officer kneeling on Floyd's neck. The 46-year-old, who was unarmed, cried out that he couldn't breathe.

Freeman said charges against the other three officers are likely.

"We entrust our police officers to use certain amounts of force to do their job to protect us. They commit a criminal act if they use this force unreasonably," he said.

If convicted of third-degree murder and second-degree manslaughter, Chauvin would face up to 25 years in prison on the first charge and up to 10 years on the second.

The preliminary autopsy report found "no physical findings that support a diagnosis of traumatic asphyxia or strangulation," according to the criminal complaint released by the Hennepin County Attorney's Office.

The report added: "The combined effects of Mr. Floyd being restrained by the police, his underlying health conditions and any potential intoxicants in his system likely contributed to his death."

Gupta also said that an officer should have started CPR after one of them told the others he couldn't find a pulse.

CNN has reached out to Chauvin's attorney and the Minneapolis police union for comment.

Tensions boil over in Minneapolis

Overnight, the Minneapolis Police Department's Third Precinct was set ablaze. Some protesters chanted Floyd's name and "I can't breathe," and some tossed fireworks toward the precinct, which is the one closest to where the incident was captured on video.

State police, donning protective gear and carrying batons, lined up Friday morning near the site littered with debris and sprayed mace at protesters who got too close. Some responded by throwing projectiles at the officers as others fled.

Meantime, a CNN crew was released from police custody in Minneapolis after they were arrested Friday during a live broadcast at the site after clearly identifying themselves to officers. CNN correspondent Omar Jimenez was placed in handcuffs while the cameras rolled, shortly followed by producer Bill Kirkos and photojournalist Leonel Mendez.

The state patrol said the crew was "released once they were confirmed to be members of the media." CNN disputed that characterization, saying, "Our CNN crew identified themselves, on live television, immediately as journalists."

The Minneapolis Police Department said it evacuated staff from the Third Precinct for safety reasons. Authorities had set up a fence around it, but protesters pushed it over, officials said.

City officials warned protesters Thursday night to leave the precinct area, saying it may be in danger of exploding due to "unconfirmed reports" of severed gas lines.

More than 500 Minnesota National Guard personnel mobilized to several locations in the Minneapolis area, including banks, grocery stories and pharmacies.

Another community organizer, Shanene Herbert, told CNN Thursday before the night's events that young people had "every right to be angry."

"They have experienced trauma," she said. "Seeing your friends, your families and even yourself harassed by the police and killed by the police, it's traumatic. And they don't know what to do with that."

"What we've seen over the past several hours and the past couple of nights in terms of looting is unacceptable," Frey told reporters. "Our communities cannot and will not tolerate it."