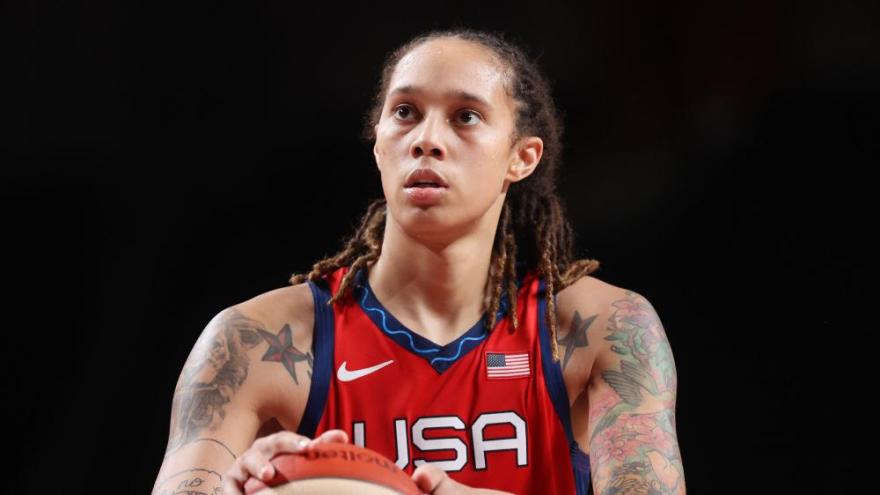 Brittney Griner at the Tokyo 2020 Olympic Games on July 27, 2021, in Saitama, Japan. A State Department spokesperson said that they "deeply regret that Brittney Griner was unable to speak with her wife because of a logistical error" after a report that the detained WNBA star's multiple attempts to connect by phone with her wife went unanswered by the US Embassy in Moscow.

(CNN) -- A State Department spokesperson said Monday that they "deeply regret that Brittney Griner was unable to speak with her wife because of a logistical error" after a report that the detained WNBA star's multiple attempts to connect by phone with her wife went unanswered by the US Embassy in Moscow.

Cherelle Griner told The Associated Press that Brittney Griner, who has been detained for months in Russia, attempted to call her 11 times on Saturday -- their anniversary -- but nobody at the US Embassy in Moscow was there to connect the call. Cherelle Griner told the AP she was "very pissed" about the error and that the call had been scheduled for weeks. She also said she had learned that the number her wife had been given to call usually processes calls only on weekdays, which is likely why the multiple calls had gone unanswered.

CNN has reached out to the family's representative. Griner's agent, Lindsay Kagawa Colas, said in a tweet Monday that her "heart breaks into pieces every time I think of it - but it's nothing compared to the reality BG and her family are enduring."

The State Department spokesperson did not give further details about the "logistical error."

Asked about the AP report, the State Department spokesperson told CNN that the department has "no higher priority than the safety and security of U.S. citizens overseas."

"We remain in regular contact with the families of those held hostage or wrongfully detained; we are grateful for their partnership and feedback; and we continue to work to ensure we are communicating and sharing information in a way useful to our families," the spokesperson said.

Brittney Griner, 31, has been held in Russia since February on accusations of drug smuggling and has been officially classified as "wrongfully detained," a US State Department official told CNN in May.

She will remain in Russian custody through at least July 2, after a Russian court extended her detention, Russian state news agency Tass reported last week.

Supporters, including Griner's family and the WNBA, have vigorously advocated for her release, with some expressing concern that Moscow would use her as a political pawn amid tensions over Russia's invasion of Ukraine.

Griner was arrested at a Moscow airport in February, when Russian authorities claimed she had cannabis oil in her luggage and accused her of smuggling significant amounts of a narcotic substance, an offense punishable by up to 10 years in prison. The two-time Olympic gold medalist and star of the WNBA's Phoenix Mercury plays in Russia during that league's offseason.

Her case is being handled by the Office of the US Special Presidential Envoy for Hostage Affairs.