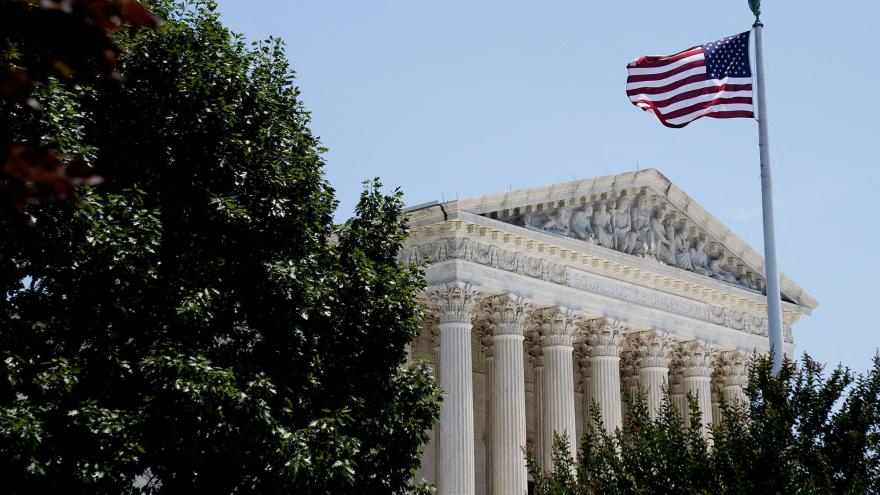 The U.S. Supreme Court building is seen in Washington, U.S., on June 26. The Supreme Court on August 19 sided with Black voters who challenged Georgia's system of electing members to the state's Public Service Commission.

(CNN) -- Pedestrians accustomed to the hum of a passing Tesla will be in for a shock when a new electric vehicle hits the streets. Dodge, famous for its gas-powered muscle cars like the Charger and Challenger, says it plans to roll out the electric Charger Daytona in 2024 -- featuring exhaust pipes that make noise and a transmission that shifts gears. Of course, the whole point of an electric car is that it doesn't have an exhaust system, but it will save owners from having to make "Vroom-vroom!" noises while waiting for the light to change.

Here's what else you need to know to Start Your Week Smart.

• The Supreme Court on Friday sided with Black voters who challenged Georgia's system of electing members to the state's Public Service Commission, which regulates public utilities in the state.

• Some 27 ships loaded with grain have left Ukraine's Black Sea ports since August 1 under an export deal brokered by the UN and Turkey, which has laid "the groundwork for a permanent peace environment," Turkey's Defense Minister said in a speech on Saturday.

• Russian authorities said today they had opened a murder investigation after the daughter of influential, ultra-nationalist philosopher Alexander Dugin was killed by a car bomb near Moscow.

• Wendy's restaurants have been associated with an E. coli outbreak reported in four states, with 37 people infected and 10 hospitalized, the US Centers for Disease Control and Prevention said Friday.

• Somali forces have ended the siege at an upscale hotel in the country's capital, Mogadishu, police told CNN, following an attack from unidentified gunmen that left at least 20 dead.

The sentencing phase of the Parkland, Florida, school shooter's trial is scheduled to resume. The gunman, who pleaded guilty to 17 counts of murder and 17 counts of attempted murder in the 2018 mass shooting at Marjory Stoneman Douglas High School, faces either the death penalty or life in prison without the possibility of parole.

Sen. Lindsey Graham is scheduled to appear before a special grand jury investigating the effort to overturn the 2020 presidential election in Georgia. Last week, a federal judge in Atlanta denied the South Carolina Republican's motion to quash a subpoena, ruling that he must testify. However, a federal appeals court on Sunday temporarily paused a district court's order requiring Graham appear before the Fulton County jury. Graham had asked a separate federal judge to stay that decision until he can appeal.

It's also primary day in Florida and New York, and there will be primary runoffs in Oklahoma.

August 24 is Kobe Bryant Day, a day to remember the Los Angeles Lakers legend and his daughter Gianna, who died along with seven others in a helicopter crash in 2020.

An Oklahoma law that makes performing an abortion a felony goes into effect, making anyone who performs or attempts to perform the procedure subject to a maximum fine of $100,000 or a maximum of 10 years in state prison, or both. The only exception is for abortions necessary to save the life of the mother. The legislation does not provide exceptions in cases of rape and incest.

What exactly does the Inflation Reduction Act have to do with climate -- and how will it impact you? Listen to the Sunday Edition of the '5 Things' podcast for a breakdown with CNN Climate Reporter Ella Nilsen. (Listen here)

Check out more moving, fascinating and thought-provoking images from the week that was, curated by CNN Photos.

'House of the Dragon'

The highly anticipated prequel to HBO's blockbuster series "Game of Thrones" premieres tonight at 9 p.m. ET. CNN's Brian Lowry says "House of the Dragon" is a series "whose epic visual grandeur belies a smaller and less addictive power struggle, more narrowly focused on the Targaryen line." It also has dragons aplenty. HBO, like CNN, is part of Warner Bros. Discovery.

College football season begins with games scheduled throughout the day on Saturday -- including the overseas matchup of Nebraska and Northwestern in the Aer Lingus College Football Classic in Dublin, Ireland.

Take CNN's weekly news quiz to see how much you remember from the week that was! o far, 31% of fellow quiz fans have gotten eight or more questions right. How well will you do?

To put all of you "GoT" fans out there in the mood for "House of the Dragon" tonight, here's a little reminder of the melody you hummed for eight straight seasons. And if you're not a fan, this is still worth a listen. (Click here to view)