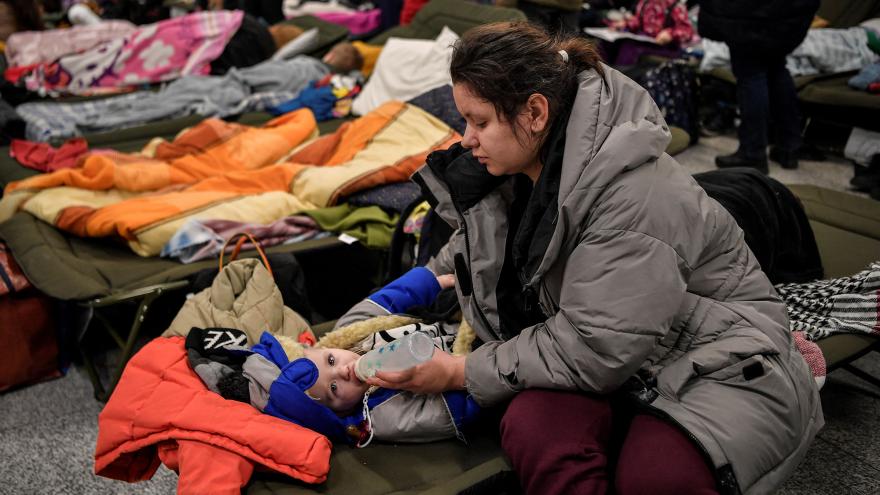 (CNN) -- Travelers are scrambling to get flights in and out of Europe following Russia's invasion of Ukraine. More than 30 countries have so far closed their airspace to Russia -- with Moscow reacting in kind -- and multiple companies are suspending major operations. Russia's largest airline, Aeroflot, was also yanked from global reservation systems and travel websites, crippling the carrier's ability to sell seats. Here's what else you need to know to Start Your Week Smart.

• A tornado that touched down near Des Moines, Iowa, yesterday killed seven people -- including two children -- officials said. The National Weather Service office in Des Moines said an initial estimate shows it was an EF3 tornado, with wind speeds of at least 136 miles per hour.

• The average price for a gallon of regular gas in the US hit $4 today, the highest level since 2008. And with prices surging amid Russia's attack on Ukraine, the record high of $4.11 per gallon set that year is likely to fall any day.

• Sydney is bracing for more rain as the death toll from flooding in Australia rose to 17. Thousands of people have been displaced as heavy downpours swept away property, livestock and roads.

• North Korea fired a single ballistic missile into waters off the east of the Korean Peninsula yesterday, according to South Korea's Joint Chiefs of Staff. It was the country's ninth such test of the year.

Happy International Women's Day! The day not only recognizes the achievements made by women, but also aims to raise awareness against bias and promote women's equality worldwide.

Apple is set to hold its first big product event of the year. The company is rumored to be unveiling a series of new MacBooks and iMacs featuring the second iteration of its powerful in-house processor, as well as a 5G version of its more-affordable iPhone SE and an updated iPad Air.

The US Senate Foreign Relations Committee is scheduled to hold a hearing on the US and international response to Russia's invasion of Ukraine. State Department undersecretary for political affairs Victoria Nuland is set to testify.

Voters in South Korea will choose a successor to Moon Jae-in, who is only eligible for a single term. Moon replaced Park Geun-hye in May 2017 after her impeachment in an abuse of power scandal. The ruling Democratic Party's candidate is Lee Jae-Myung. Last week, Moon expressed his condolences for the lives lost and "respect" for the "courage and sacrifice" of the Ukrainian people during a phone call with Ukrainian President Volodymyr Zelensky. He also said South Korea would provide $10 million in humanitarian aid.

Jussie Smollett, the former "Empire" actor who was convicted of staging a fake hate crime, is scheduled to be sentenced. Smollett was found guilty in December of five counts of felony disorderly conduct over false assertions that he had been the target of a racist and homophobic attack in 2019. A disorderly conduct charge for a false crime report is a Class 4 felony and punishable by up to 3 years in prison and a $25,000 fine. Cook County Judge James Linn will determine whether to impose a concurrent or consecutive sentence for each of the five counts.

Wall Street will get the latest snapshot of inflation when the Consumer Price Index for February is released before the start of trading. The CPI rose 7.5% in the 12 months ending January, not adjusted for seasonal swings, according to the Bureau of Labor Statistics. It was the steepest annual price increase since February 1982 and worse than economists had forecast.

Friday marks two years since the World Health Organization declared the Covid-19 pandemic. Covid-19 has killed more than 950,000 people and infected about 79.2 million in the United States since January 2020, according to data by Johns Hopkins University.

The US federal government's temporary funding measure, which helped avert a government shutdown last month, is set to expire. The bill signed into law by President Joe Biden extended funding until March 11. Lawmakers are working to lock in a broader full-year spending package, but opted for a short-term funding extension last month because they said they needed more time to hammer out the details.

This week on the Sunday edition of the 5 Things podcast, CNN Senior Medical Correspondent Elizabeth Cohen explains what's different about this "new phase" of the Covid-19 pandemic, and examines a possible shortcoming of the Biden administration's new plan for it. Listen here!

Here's a look at other moving, fascinating and thought-provoking images from the week that was, curated by CNN Photos.

'The Batman' flies into theaters this weekend

Starring Robert Pattinson as Batman/Bruce Wayne and Zoë Kravitz as Catwoman, "The Batman" is receiving major buzz after premiering in US theaters on Friday. "Batman has a long history of provoking passionate reactions and debate, and the latest entry will be no exception," CNN's Brian Lowry writes in his review. "In Pattinson, the producers have found a Dark Knight worthy of the hoopla, while creating a Gotham much in need of him," he added, offering two disclaimers: The movie hangs around a bit too long at nearly three hours, and it owes more to detective-driven movies like "Seven" and "L.A. Confidential" than other superhero fare.

Major League Baseball has canceled spring training games through at least March 17 as negotiations on a new collective bargaining agreement between the league and the players' union drag on.

Russian teams suspended from competitions by FIFA and UEFA

FIFA and UEFA have suspended all Russian international and club teams from competitions "until further notice," football's governing bodies announced in a joint statement last week. Spartak Moscow had been due to play RB Leipzig in the Europa League, with the first leg in Germany on March 10 and the second leg scheduled for March 17.

Russian and Belarusian athletes and officials will be banned indefinitely from competitions, the International Gymnastics Federation announced Friday. The decision means athletes and officials, including judges, from those two federations are barred from taking part in the Acrobatic Gymnastics World Championships in Baku, Azerbaijan, from March 10-13.

Take CNN's weekly news quiz to see how much you remember from the week that was! So far, 81% of fellow quiz fans have gotten an 8 out of 10 or better this week. How well can you do?

"Somewhere over the rainbow"