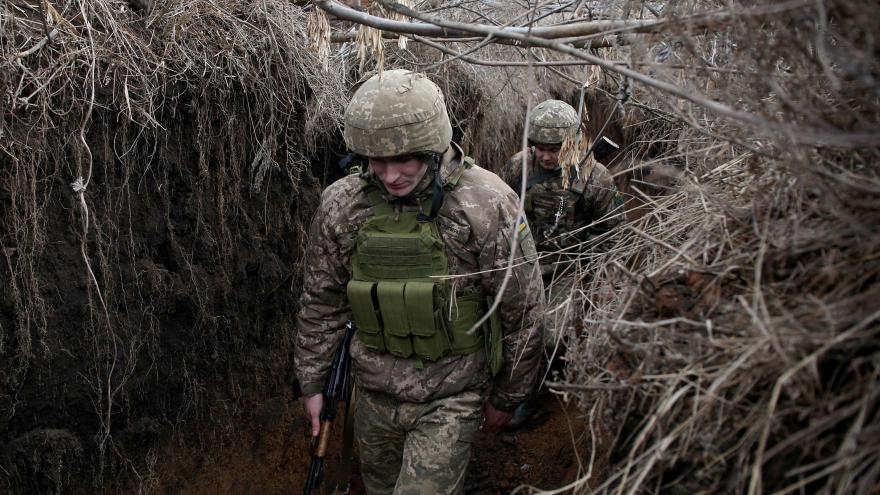 (CNN) -- The world's shortest international commercial flight is only eight minutes from takeoff to landing. Can you guess where? Hint: It's tropical! Here's what else you need to know to Start Your Week Smart.

• Ukraine says it recorded more than 100 truce violations in the east after a day of heavy weapons fire that saw fears of a Russian invasion mount.

• Millions of Americans will be forced into an involuntary polar plunge this week.

• The Pittsburgh Steelers hired Brian Flores, who is suing the NFL for racial discrimination, as assistant coach.

Monday is President's Day, a federal holiday honoring all 46 presidents of the United States. The day is also known as "Washington's Birthday," after the nation's first president, George Washington. Although Washington's actual birthday is February 22, the holiday is celebrated on the third Monday of February.

AT&T is shutting down its 3G network on Tuesday. The move will impact people still using 3G Kindles, 3G flip phones, the iPhone 5 and older models, various Android phones and some wearable devices. It will also affect home alarm systems and medical devices such as fall detectors. Some in-car crash notification and roadside assistance systems like OnStar will also need to be updated or replaced. AT&T owns WarnerMedia, CNN's parent company.

Ahmaud Arbery, 25, was chased down and fatally shot two years ago on February 23, 2020. A jury found the three White men charged in the killing guilty on multiple murder counts in November. Last week, the focus of the ongoing federal hate crimes trial zeroed in on offensive language, racial epithets, and talk of racial violence used by the three men in text messages and social media posts. While last year's state murder trial avoided discussion of race, the federal hate crimes trial is more clearly focusing on race as prosecutors must prove the men acted out of racial animus.

Saturday is the 10th anniversary of the shooting death of 17-year-old Trayvon Martin. Martin was an African-American high school student who lived in Florida. He was killed by former neighborhood watch volunteer George Zimmerman, who was put on trial in 2013 and was found not guilty.

This week on the Sunday edition of the 5 Things podcast, CNN's Don Lemon reflects on Trayvon Martin's death as we approach the 10th anniversary. He examines why the killing initially struggled to make headlines, traces the rise of the "Black Lives Matter" movement in the decade since, and shares why his conversations with Martin's mother are among the most powerful interviews he's ever done. Listen here!

Take a look at other moving, fascinating and thought-provoking images from the week that was, curated by CNN Photos.

Actor Tom Holland puts his considerable charm to the test in the new movie "Uncharted," a film built around the Spider-Man star and wild aerial acrobatics. Based on a PlayStation game, "Uncharted" is "at best a B movie with A-level stunts," says CNN's Brian Lowry.

The new season of "The Marvelous Mrs. Maisel" starring Rachel Brosnahan is "starting to look stale as it nears the exit," Lowry also says, noting it "feels like too much of a reset." The fourth season is now streaming on Amazon.

FX's critically-acclaimed "Atlanta" is coming to an end. During a panel for the show, star and executive producer Donald Glover said he was at peace with the decision to end the show. "I think it ends perfectly," he said. Season 3 of "Atlanta," which takes place almost entirely in Europe, is set to premiere on FX on March 24. The fourth and final season has already been shot but no official premiere date has been announced.

The 2022 Beijing Winter Olympics come to an end today! Catch up on the final events and the closing ceremonies here!

Transgender swimmer Lia Thomas won the 100-yard freestyle in a meet record of 47.63 seconds yesterday at the Ivy League women's swimming and diving championships. This marks her third title of the competition.

Take CNN's Presidents' Day quiz to see how well you know US presidents! So far, 10% of fellow quiz fans have gotten an 8 out of 10 or better this week. How well can you do?

A song of hope and humanity