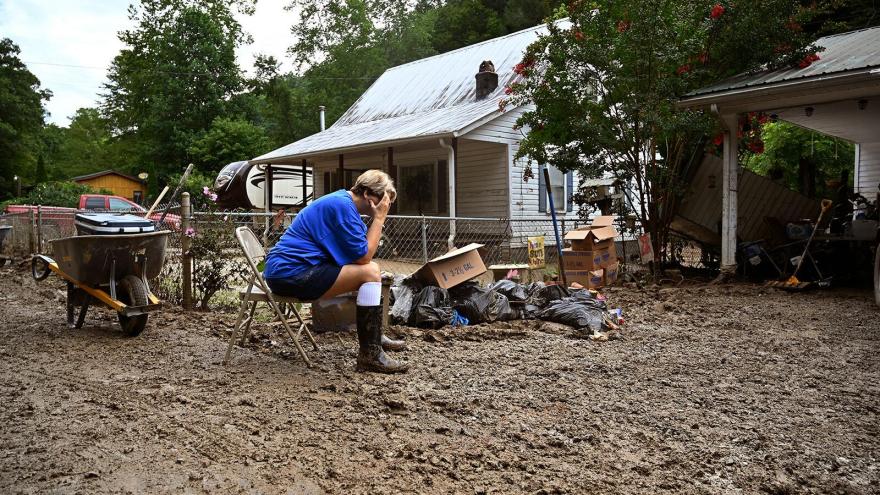 Teresa Reynolds sits exhausted as members of her community clean the debris from their flood ravaged homes at Ogden Hollar in Hindman, Ky., Saturday, July 30.

(CNN) -- We've endured much as a nation this year: rampant inflation, fierce political discord, extreme weather conditions and an ongoing pandemic. Nothing, however, may be as troubling as the coming candy apocalypse. Hershey warned last week that due to capacity constraints and ongoing supply chain issues, it may not be able to meet consumer demand for Halloween candy this fall. The horror ... the horror.

Here's what else you need to know to Start Your Week Smart.

• Days after deadly flooding in eastern Kentucky claimed the lives of at least 25 people, more rain today will threaten some of the hardest-hit areas as rescuers are still looking for missing residents and thousands struggle to recover without cell service and power.

• President Joe Biden tested positive for Covid-19 again on Saturday, per a letter from presidential physician Dr. Kevin O'Connor, in what is likely a "rebound" Covid-19 positivity that the doctor noted is "observed in a small percentage of patients treated with Paxlovid."

• Remnants of a massive Chinese rocket that was descending uncontrollably back to Earth reentered the atmosphere over the Indian Ocean at roughly 12:45 p.m. ET on Saturday, the US Space Command said on Twitter.

• New York City officials declared monkeypox a public health emergency on Saturday, saying the city is the epicenter of the state's outbreak and the move will boost measures to help slow the spread of the disease.

• The chase for the second-largest Mega Millions jackpot has ended -- with a single ticket sold in the Chicago area for the whole $1.337 billion.

Primary season rolls on as we get ever closer to the 2022 midterm elections, with voters in Arizona, Kansas, Michigan, Missouri and Washington heading to the polls. Results in Arizona will be closely watched as the election there is shaping up to be a proxy fight between former President Donald Trump and former Vice President Mike Pence.

Tuesday is also the day the Bureau of Labor Statistics releases a key reading on the health of the job market. The bureau's Job Openings and Labor Turnover Survey -- known as the JOLTS report -- will show the number of job openings available in June. In May, there were 11.3 million job openings, which outnumbered available workers by nearly 2 to 1.

Bucking the "if it's Tuesday, it's primary day" trend, voters in Tennessee will instead cast their ballots on August 4 as three Democratic candidates hope to win their party's nomination to take on Republican Gov. Bill Lee in November,  who is running unopposed in the GOP primary.

It's also the 232nd birthday of the United States Coast Guard.

The government's monthly employment report for July drops on August 5 as fears of a recession deepen. The US economy added a better-than-expected 372,000 jobs in June and the unemployment rate held steady at 3.6% -- still close to a 52-year low.

Voters head to the polls on Tuesday in a series of closely watched Republican primaries in Arizona. Listen to the Sunday edition of the CNN 5 Things podcast to hear CNN's Donie O'Sullivan talk about his trip to the state, where he asked voters how they feel about former President Donald Trump's election lies and the current state of the GOP.

Check out more moving, fascinating and thought-provoking images from the week that was, curated by CNN Photos.

The latest edition to the "Predator" franchise is set 300 years ago in the Comanche Nation, where a young female warrior fights to protect her tribe against one of the first highly-evolved Predators to land on Earth. "Prey" lands on Hulu on Friday.

This action/comedy starring Brad Pitt, Sandra Bullock and a host of other actors places five assassins aboard a fast moving bullet train from Tokyo to Morioka, where they find out their missions have something in common. "Bullet Train" rolls into theaters on Friday.

The 2022 Commonwealth Games, known as the Friendly Games, continue in Birmingham, England. Competitions began on July 28 and end on August 7.

Take CNN's weekly news quiz to see how much you remember from the week that was! So far, 43% of fellow quiz fans have gotten an 8 out of 10 or better this week. How well can you do? (Click here)