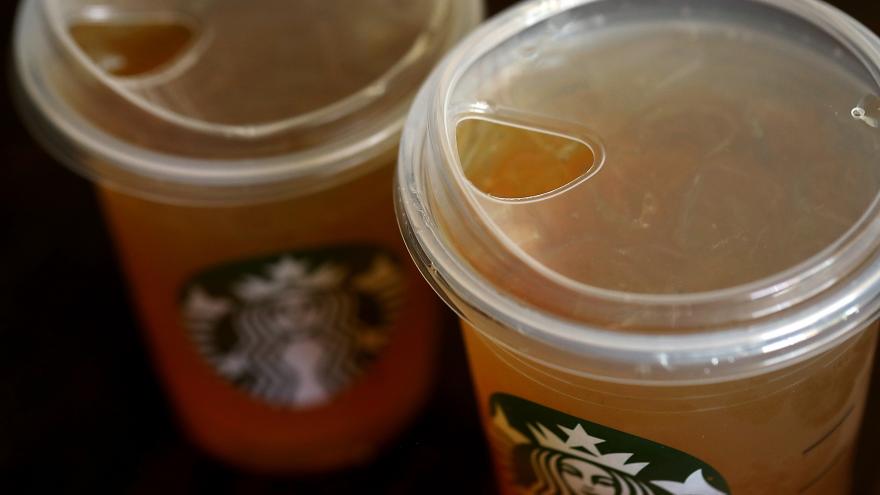 After announcing in July 2018 that it would begin phasing out plastic straws from all its stores by 2020, the modified plastic lid with a drinking spout is now making its official debut.

But the straw-free rendition of the Starbucks cup won't be taking effect for all drinks.

Blended beverages, including Frappuccinos, and other drinks with whipped cream will still come with a domed lid and a straw included. That is, of course, except where plastic straws are prohibited by local law. And in those cases, straws with alternative materials will be used.

The straw-free lids are anticipated to be fully adopted in company-operated and licensed Starbucks stores in both the United States and Canada by the end of the month. The lids contain roughly 9% less plastic than Starbucks previous flat lid and straw combination and are made of polypropylene, a commonly accepted recyclable plastic.

"Recyclable, strawless lids for customers across the US and Canada is another step in our journey to reduce our environmental footprint," said Michael Kobori, Starbucks' chief sustainability officer. "As we move closer toward our 2030 target of a 50 percent reduction in waste sent to landfills, the long-standing history of innovation within Starbucks, partnership across the industry and changing consumer behavior remain fundamental to our purpose and our prosperity as an organization."

Plastic straws can increase ocean pollution and microplastics that can harm marine wildlife. The coffee company says it hopes to eliminate more than 1 billion plastic straws per year. In 2018, a number of cities throughout the United States began banning plastic straws.

Starbucks' plastic straws nix comes as the coffee giant continues its sustainability efforts of doing away with "packaging and plastics that end up in landfills" in favor of increased recyclable materials for their drinks.

That includes Starbucks' coffee cup, which the company last year enlisted efforts to make more "green." In 2017, Starbucks distributed 3.85 billion paper cups, which were not recycled in most places.

Along with other food brands including McDonald's, Yum! Brands, Coca-Cola and Wendy's, Starbucks committed to the NextGen Cup Challenge, assembled by Closed Loop Partners, an investment firm centered around sustainability.

The challenge recruited ideas from the public for an widely recyclable or compostable cup. After 12 winners were selected, Starbucks announced in March it would begin testing some of the winning cup ideas in different facilities across New York, San Francisco, Seattle and Vancouver. The company's goal is to develop a 100% compostable and recyclable hot cup by 2022, according to its 2019 Sustainability Report.

While Starbucks continues to brew over a greener, more recyclable cup solution for its more than 29,800 stores, the company considers its national rollout of strawless lids as a "significant milestone" in Starbucks becoming a "resource positive company."