'Star Wars: The Rise of Skywalker' trailer showcases the final chapter of the Skywalker saga 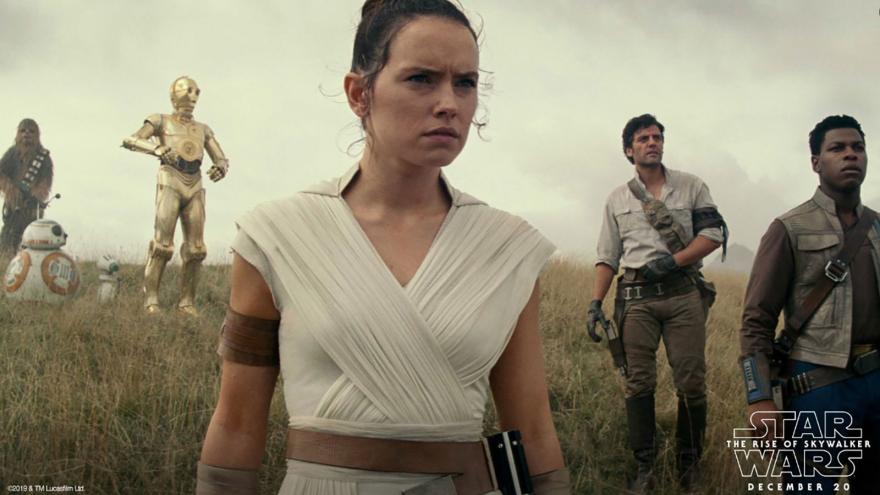 (CNN) -- Fans got their latest look at the last chapter of the Skywalker saga on Monday night, Oct. 21.

The official trailer for "Star Wars: The Rise of Skywalker" — Disney's latest film in the massively popular "Star Wars" franchise — debuted during halftime of ESPN's Monday night NFL match up between the New England Patriots and the New York Jets.

The two-minute-long trailer took viewers through the many galaxies of the Star Wars universe while focusing on the battle between the light and dark sides of the Force represented in Daisy Ridley's Rey and Adam Driver's Kylo Ren.

"People keep telling me they know me," Ridley's Rey says in the trailer. "No one does."

"But I do," Driver's Ren responds.

The film, which will hit theaters on December 20, will also star Mark Hamill as Luke Skywalker, Billy Dee Williams as Lando Calrissian and the late Carrie Fisher, who will reprise her role as General Leia Organa thanks to the help of "previously unreleased footage shot for 'The Force Awakens.'"

The trailer ends with Hamill's Skywalker saying, "the Force will be with you."

Pre-sale tickets to "Rise of Skywalker" went on sale on Monday night. Disney also debuted a new poster for the film.

"The Rise of Skywalker" is the ninth and final episode in the Skywalker story. It is a direct sequel to 2017's "The Last Jedi" and will complete Disney's new Star Wars trilogy, which started in 2015 with "The Force Awakens."

Disney's trilogy has been a big box office success for the company, which acquired Lucasfilm for $4 billion in 2012.

But Star Wars is a much bigger business for Disney than just movies.

The franchise will be a major component of the company's new streaming service, Disney+. The original Star Wars trilogy, the prequels, "The Force Awakens" and "Rogue One," will be on the service. "The Mandalorian" — a series set in the world of Star Wars about the adventures of bounty hunters — will be one of the service's flagship shows when Disney+ launches on November 12.

Disney also opened Star Wars: Galaxy's Edge — the largest expansion ever at its theme parks — over the summer.

"The Rise of Skywalker" looks to put an exclamation point on Disney's big year at the box office. The company has had major hits in 2019 like "Avengers: Endgame" and "The Lion King," and set the record for highest-grossing year for a studio ever in July.